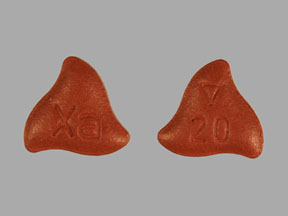 Generic Name: rivaroxaban (RIV a ROX a ban)
Brand Names: Xarelto
Xarelto (rivaroxaban) is a factor Xa inhibitor used to reduce the risk of blood clots and stroke in patients with atrial fibrillation, for the treatment of deep vein thrombosis (DVT) and pulmonary embolism (PE), to reduce the risk of DVT and/or PE in certain at-risk patients, for the prevention of DVT in patients undergoing knee or hip replacement surgery, for the prevention of venous thromboembolism (VTE) in acutely ill medical patients, and in combination with aspirin to reduce the risk of major cardiovascular events in patients with chronic coronary artery disease (CAD) or peripheral artery disease (PAD). Includes Xarelto side effects, interactions and indications.
Learn more

Xarelto (rivaroxaban) blocks the activity of certain clotting substances in the blood. Xarelto is used to prevent or treat a type of blood clot called deep vein thrombosis (DVT), which can lead to blood clots in the lungs (pulmonary embolism). A DVT can occur after knee or hip replacement surgery, and during or after a stay in the hospital when you cannot move around as much as normal. Xarelto is sometimes used to lower your risk of a DVT or PE coming back after you have received treatment for blood clots for at least 6 months. Learn more

How much is my Xarelto co-pay with Medicare?

Ways to Save on Xarelto

Here are some ways that may lower the cost of your xarelto prescription.

Xarelto (rivaroxaban) blocks the activity of certain clotting substances in the blood.

Xarelto is used to prevent or treat a type of blood clot called deep vein thrombosis (DVT), which can lead to blood clots in the lungs (pulmonary embolism). A DVT can occur after knee or hip replacement surgery, and during or after a stay in the hospital when you cannot move around as much as normal.

Xarelto is sometimes used to lower your risk of a DVT or PE coming back after you have received treatment for blood clots for at least 6 months.

Xarelto is used in people with atrial fibrillation (a heart rhythm disorder) to lower the risk of stroke caused by a blood clot.

Xarelto is used to help prevent blood clots in certain people hospitalized for an acute illness who are at risk of getting blood clots and who do not have a high risk of bleeding.

Do not stop taking Xarelto without first talking to your doctor. Stopping suddenly can increase your risk of blood clot or stroke.

Xarelto can cause you to bleed more easily. Call your doctor at once if you have signs of bleeding such as: bleeding gums, nosebleeds, heavy menstrual periods or abnormal vaginal bleeding, blood in your urine, bloody or tarry stools, coughing up blood or vomit that looks like coffee grounds, headaches, or dizziness/fainting.

You should not use Xarelto if you have an artificial heart valve.

Many other drugs can increase your risk of bleeding when used with rivaroxaban. Tell your doctor about all medicines you have recently used.

Xarelto can cause a very serious blood clot around your spinal cord if you undergo a spinal tap or receive spinal anesthesia (epidural). Tell any doctor who treats you that you are taking rivaroxaban.

You should not use Xarelto if you are allergic to rivaroxaban, or if you have active or uncontrolled bleeding.

Xarelto can cause a very serious blood clot around your spinal cord if you undergo a spinal tap or receive spinal anesthesia (epidural). This type of blood clot could cause long-term paralysis, and may be more likely to occur if:

Xarelto may cause you to bleed more easily, especially if you have:

Taking Xarelto during pregnancy may cause bleeding in the mother or the unborn baby. Tell your doctor if you are pregnant or plan to become pregnant.

It may not be safe to breastfeed a baby while you are using this medicine. Ask your doctor about any risks.

If you need surgery, tell your doctor you are taking Xarelto. If possible, Xarelto should be stopped at least 24 hours prior to surgery to reduce bleeding risk. Do not stop taking Xarelto without speaking with your doctor first.

How should I take Xarelto?

Take Xarelto exactly as prescribed by your doctor. Follow all directions on your prescription label and read all medication guides or instruction sheets. Your doctor may occasionally change your dose. Use the medicine exactly as directed.

The number of times you take Xarelto each day will depend on the reason you are using this medication.

For some conditions, Xarelto should be taken with food. Whether you take the medicine with or without food may also depend on the tablet strength you take. Follow your doctor's dosing instructions very carefully.

Tell your doctor if you have trouble swallowing a Xarelto tablet. You can crush Xarelto and mix with applesauce if necessary. Take the medication immediately after crushing and mixing.

Do not change your dose or stop taking this medication without first talking to your doctor. Stopping suddenly can increase your risk of blood clot or stroke.

What happens if I miss a dose of Xarelto?

If you take Xarelto 1 time each day: Take the medicine as soon as you remember, and then go back to your regular schedule. Do not take two doses on the same day.

If you take the Xarelto 2.5mg tablet 2 times each day: Skip the missed dose and take your next dose at the regular time.

If you take the Xarelto 15mg tablet 2 times each day: Take Xarelto immediately to ensure that you get 2 tablets in one day. You can take both tablets at one time.

What happens if I overdose of Xarelto?

Overdose may cause excessive bleeding.

What should I avoid while taking Xarelto?

Avoid activities that may increase your risk of bleeding or injury. Use extra care to prevent bleeding while shaving or brushing your teeth.

Get emergency medical help if you have signs of an allergic reaction to Xarelto: hives; difficult breathing; swelling of your face, lips, tongue, or throat.

Also seek emergency medical attention if you have symptoms of a spinal blood clot: back pain, numbness or muscle weakness in your lower body, or loss of bladder or bowel control.

Rivaroxaban can cause you to bleed more easily. Call your doctor at once if you have signs of bleeding such as:

Bleeding is the most common side effect of rivaroxaban.

Common Xarelto side effects may include:

What other drugs will affect Xarelto?

Tell your doctor about all medicines you use, and those you start or stop using during your treatment with Xarelto, especially:

This list is not complete. Other drugs may interact with rivaroxaban, including prescription and over-the-counter medicines, vitamins, and herbal products. Not all possible interactions are listed in this medication guide.

Remember, keep this and all other medicines out of the reach of children, never share your medicines with others, and use Xarelto only for the indication prescribed.

Note: This document contains side effect information about rivaroxaban. Some of the dosage forms listed on this page may not apply to the brand name Xarelto.

Premature discontinuation of any oral anticoagulant, including rivaroxaban, increases the risk of thrombotic events. To reduce this risk, consider coverage with another anticoagulant if rivaroxaban is discontinued for a reason other than pathological bleeding or completion of a course of therapy. Epidural or spinal hematomas, which may result in long-term or permanent paralysis, have occurred in patients treated with rivaroxaban who are receiving neuraxial anesthesia or undergoing spinal puncture. Optimal timing between the administration of rivaroxaban and neuraxial procedures is not known. Factors that can increase the risk of developing hematomas include: use of indwelling epidural catheters; concomitant use of drugs affecting hemostasis, such as NSAIDs, platelet inhibitors, or other anticoagulants; or a history of traumatic or repeated epidural or spinal punctures, spinal deformity, or spinal surgery. Monitor patients frequently for neurological impairment. If neurological compromise is noted, urgent treatment is necessary. Consider risks/benefits before neuraxial intervention in patients anticoagulated or to be anticoagulated for thromboprophylaxis.

Along with its needed effects, rivaroxaban (the active ingredient contained in Xarelto) may cause some unwanted effects. Although not all of these side effects may occur, if they do occur they may need medical attention.

Check with your doctor immediately if any of the following side effects occur while taking rivaroxaban:

The most common adverse reactions were bleeding complications.

The risk of bleeding may be increased in certain patient groups, including patients with uncontrolled severe arterial hypertension and/or concomitant treatment affecting hemostasis.

Common (1% to 10%): Anemia (including postoperative anemia)

Uncommon (0.1% to 1%): Cerebral and intracranial hemorrhage

Following study drug discontinuation in the ROCKET AF trial, cases of stroke were reported in during the transition from rivaroxaban (the active ingredient contained in Xarelto) to warfarin in nonvalvular atrial fibrillation patients.

Frequency not reported: Pericardial and intra-articular bleeding, symptoms of cardiac ischemia such as chest pain or angina pectoris (as a consequence of anemia)

Rare (less than 0.1%): Increased conjugated bilirubin (with or without concomitant ALT increase), jaundice

Frequency not reported: Renal failure/acute renal failure secondary to a bleeding sufficient to cause hypoperfusion

Common (1% to 10%): Decreased general strength and energy (including fatigue and asthenia), fever