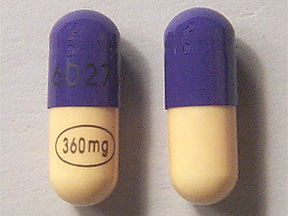 Verapamil is a calcium channel blocker. It works by relaxing the muscles of your heart and blood vessels. Verapamil is used to treat hypertension (high blood pressure), angina (chest pain), and certain heart rhythm disorders. Verapamil injection is used to rapidly or temporarily restore normal heartbeats in people with certain heart rhythm disorders. You should not use verapamil if you have a serious heart condition such as "sick sinus syndrome" or "AV block" (unless you have a pacemaker), severe heart failure, Wolff-Parkinson-White, Lown-Ganong-Levine syndrome, or slow heartbeats that have caused you to faint. Learn more

Verapamil is a calcium channel blocker. It works by relaxing the muscles of your heart and blood vessels.

You should not use verapamil if you have a serious heart condition such as "sick sinus syndrome" or "AV block" (unless you have a pacemaker), severe heart failure, Wolff-Parkinson-White, Lown-Ganong-Levine syndrome, or slow heartbeats that have caused you to faint.

You should not use verapamil if you are allergic to it, or if you have a serious heart condition such as:

You may not be able to use verapamil if you have:

To make sure verapamil is safe for you, tell your doctor if you have ever had:

It is not known whether verapamil will harm an unborn baby. Tell your doctor if you are pregnant or plan to become pregnant.

Verapamil oral is not approved for use by anyone younger than 18 years old.

How should I use verapamil?

Verapamil injection is given as an infusion into a vein, usually in an emergency situation. A healthcare provider will give you this injection. Your heart rate will be constantly monitored to help determine when your heartbeats have returned to normal.

Oral verapamil is taken by mouth. Follow all directions on your prescription label. Your doctor may occasionally change your dose. Do not use this medicine in larger or smaller amounts or for longer than recommended.

Do not use the injection if it looks cloudy or has particles in it. Call your pharmacist for new medicine.

Swallow a capsule or tablet whole and do not crush, chew, break, or open it.

If you need surgery, tell the surgeon ahead of time that you take verapamil.

What happens if I miss a dose of Verapamil hcl sr?

Verapamil injection: Call your doctor for instructions if you miss a dose.

What happens if I overdose of Verapamil hcl sr?

Seek emergency medical attention or call the Poison Help line at 1-800-222-1222. An overdose of verapamil can be fatal.

What should I avoid while taking verapamil?

Drinking alcohol with verapamil can cause side effects.

Avoid getting up too fast from a sitting or lying position, or you may feel dizzy. Avoid driving or hazardous activity until you know how this medicine will affect you. Your reactions could be impaired.

Grapefruit may interact with verapamil and lead to unwanted side effects. Avoid the use of grapefruit products.

What other drugs will affect verapamil?

Many drugs can interact with verapamil. Some drugs can raise or lower your blood levels of verapamil, which may cause side effects or make it less effective. Not all possible interactions are listed here. Tell your doctor about all your current medicines and any you start or stop using, especially:

This list is not complete and many other drugs can interact with verapamil. This includes prescription and over-the-counter medicines, vitamins, and herbal products. Give a list of all your medicines to any healthcare provider who treats you.

Commonly reported side effects of verapamil include: sinus bradycardia. Other side effects include: pulmonary edema, severe hypotension, and second degree atrioventricular block. See below for a comprehensive list of adverse effects.

Along with its needed effects, verapamil may cause some unwanted effects. Although not all of these side effects may occur, if they do occur they may need medical attention.

Check with your doctor immediately if any of the following side effects occur while taking verapamil:

The most commonly reported side effects include constipation, dizziness, and headache.

Paralysis/tetraparesis was reported in a patient taking this drug and colchicine concurrently.

Cardiovascular side effects may occur with greater intensity at higher doses or in patients with a history of myocardial damage.

Approximately 15% of patients who had atrial flutter/fibrillation and received this drug and digoxin developed resting ventricular rates below 50 beats/min; in the same trial, asymptomatic hypotension occurred in approximately 5% of patients.

Asystole occurred after second/third degree AV block and was usually short in duration, with spontaneous cardiac action returning within seconds in the form of a sinus rhythm.

Non-obstructive paralytic ileus was reversible when treatment was stopped.

Gingival hyperplasia occurred when this drug was given over a prolonged period of time, and was reversible once the drug was discontinued.

Reversible elevations liver enzymes occurred during treatment, and are likely the result of a hypersensitivity reaction (e.g., allergic hepatitis).

Gynecomastia occurred in older male patients on prolonged treatment, and was reversible upon discontinuation of this drug.