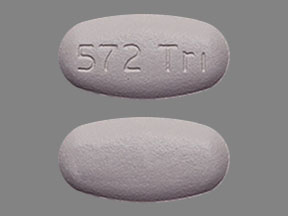 Prices and coupons of Triumeq

Triumeq contain a combination of abacavir, dolutegravir, and Lamivudine. Abacavir, dolutegravir, and Lamivudine are antiviral medications that prevent human immunodeficiency virus (HIV) from multiplying in your body. Triumeq is used to treat HIV, the virus that can cause acquired immunodeficiency syndrome (AIDS). This medicine is not a cure for HIV or AIDS. Triumeq is for use in adults and children who weigh at least 88 pounds (40 kilograms). You should not use Triumeq if you have moderate or severe liver disease, or if you are also taking Dofetilide (Tikosyn). Learn more

Triumeq is used to treat HIV, the virus that can cause acquired immunodeficiency syndrome (AIDS). This medicine is not a cure for HIV or AIDS.

Triumeq is for use in adults and children who weigh at least 88 pounds (40 kilograms).

You should not use Triumeq if you have moderate or severe liver disease, or if you are also taking dofetilide (Tikosyn).

Stop using Triumeq and call your doctor at once if you have any of these signs of an allergic reaction: fever; rash; nausea, vomiting, diarrhea, stomach pain; general ill feeling, extreme tiredness, body aches; shortness of breath, cough, sore throat.

If you've ever had hepatitis B, it may become active or get worse after you stop using Triumeq. You may need frequent liver function tests for several months.

You should not use Triumeq if you are allergic to abacavir, dolutegravir, or lamivudine, or if:

Once you have had an allergic reaction to abacavir or dolutegravir, you must never use these medicines again.

Triumeq can cause severe or life-threatening effects on your liver, especially if you have hepatitis C.

To make sure Triumeq is safe for you, tell your doctor if you have ever had:

You may develop lactic acidosis, a dangerous build-up of lactic acid in your blood. This may be more likely if you have other medical conditions, if you've taken HIV medication for a long time, or if you are a woman. Ask your doctor about your risk.

You may need to have a negative pregnancy test before starting this treatment.

Triumeq may harm an unborn baby if you take the medicine at the time of conception or during the first 12 weeks of pregnancy. Use effective birth control to prevent pregnancy, and tell your doctor if you become pregnant.

If you are pregnant, your name may be listed on a pregnancy registry to track the effects of Triumeq on the baby.

How should I take Triumeq?

Take Triumeq exactly as it was prescribed for you. Follow all directions on your prescription label and read all medication guides or instruction sheets.

Triumeq comes with a Medication Guide and a Warning Card listing symptoms of an allergic reaction. Read this information and learn what symptoms to watch for. Keep the Wallet Card with you at all times.

Use all medications as directed by your doctor. Read the medication guide or patient instructions provided with each medication. Do not change your doses or medication schedule without your doctor's advice. Every person with HIV or AIDS should remain under the care of a doctor.

Store at room temperature away from moisture and heat. Keep the tablets in their original container, along with the packet or canister of moisture-absorbing preservative.

If you've ever had hepatitis B, this virus may become active or get worse in the months after you stop using Triumeq. You may need frequent liver function tests while using this medicine and for several months after your last dose.

1 tablet orally once a day

Use: For the treatment of HIV-1 infection

Use: For the treatment of HIV-1 infection

Take the medicine as soon as you can, but skip the missed dose if your next dose is due in less than 4 hours. Do not use two doses at one time.

What should I avoid while taking Triumeq?

Avoid eating or drinking anything that contains sorbitol (an artificial sweetener).

Using this medicine will not prevent your disease from spreading. Do not have unprotected sex or share razors or toothbrushes. Talk with your doctor about safe ways to prevent HIV transmission during sex. Sharing drug or medicine needles is never safe, even for a healthy person.

Stop using Triumeq and call your doctor at once if you have symptoms of an allergic reaction from two or more of these specific side effect groups:

Once you have had an allergic reaction to a medicine that contains abacavir or dolutegravir, you must never use it again. If you stop taking Triumeq for any reason, talk to your doctor before you start taking it again.

Triumeq affects your immune system, which may cause certain side effects (even weeks or months after you've taken this medicine). Tell your doctor if you have:

Common Triumeq side effects may include:

What other drugs will affect Triumeq?

Some medicines can make Triumeq much less effective when taken at the same time. If you take any of the following medicines, take your Triumeq dose 2 hours before or 6 hours after you take the other medicine.

This list is not complete and many other drugs may interact with abacavir, dolutegravir, and lamivudine. This includes prescription and over-the-counter medicines, vitamins, and herbal products. Not all possible drug interactions are listed here.

Remember, keep this and all other medicines out of the reach of children, never share your medicines with others, and use Triumeq only for the indication prescribed.

Note: This document contains side effect information about abacavir / dolutegravir / lamivudine. Some of the dosage forms listed on this page may not apply to the brand name Triumeq.

Along with its needed effects, abacavir/dolutegravir/lamivudine may cause some unwanted effects. Although not all of these side effects may occur, if they do occur they may need medical attention.

Check with your doctor immediately if any of the following side effects occur while taking abacavir / dolutegravir / lamivudine:

The most common side effects were insomnia, headache, fatigue, nausea, and dizziness.

Many of the side effects listed occurred commonly in patients with abacavir hypersensitivity (e.g., nausea, vomiting, diarrhea, fever, lethargy, rash).

Hypersensitivity reactions were reported with abacavir and dolutegravir and shared some common features (e.g., fever and/or rash with other symptoms that indicated multi-organ involvement). In general, time to onset was 10 to 14 days for both abacavir- and dolutegravir-associated reactions.

Transaminase elevations were consistent with immune reconstitution syndrome or hepatitis B reactivation in some patients with underlying hepatitis B and/or C, especially when antihepatitis therapy was stopped.

Hepatic decompensation (some fatal) has been reported in patients coinfected with HIV-1 and HCV receiving combination antiretroviral therapy for HIV-1 and interferon alfa with or without ribavirin.

Severe acute exacerbations of hepatitis have been reported in patients with hepatitis B after discontinuation of lamivudine.

Grade 2 and grade 3 to 4 elevations in lipase were reported in up to 11% and up to 5% of therapy-naive patients, respectively. In general, laboratory abnormalities were similar in therapy-experienced patients.

Suicidal ideation, attempt, behavior, and completion have been reported, mainly in patients with history of depression or other psychiatric illness.

Grade 2 and grade 3 hyperglycemia were reported in up to 9% and up to 2% of therapy-naive patients, respectively. In general, laboratory abnormalities were similar in therapy-experienced patients.

Grade 2 and grade 3 to 4 elevations in CPK were reported in up to 5% and up to 7% of therapy-naive patients, respectively. In general, laboratory abnormalities were similar in therapy-experienced patients.

Asymptomatic CPK elevations, mainly associated with exercise, have been reported with dolutegravir.

Grade 2 and grade 3 to 4 reductions in total neutrophils were reported in up to 4% and up to 3% of therapy-naive patients, respectively. In general, laboratory abnormalities were similar in therapy-experienced patients.

Suspected Stevens-Johnson syndrome (SJS) and toxic epidermal necrolysis (TEN) have been reported in patients using abacavir primarily in combination with agents known to be associated with SJS and TEN, respectively.

Cases of erythema multiforme, SJS, or TEN have been reported very rarely when abacavir hypersensitivity could not be ruled out.

Dolutegravir was shown to increase serum creatinine due to inhibition of tubular secretion of creatinine without affecting renal glomerular function. Increased serum creatinine was reported within the first 4 weeks of therapy and remained stable through 144 weeks. In 1 trial, a mean change from baseline of 0.14 mg/dL (range: -0.25 to 0.81 mg/dL) was reported after 144 weeks of therapy in therapy-naive patients. Creatinine increases were similar in therapy-experienced patients.

Frequency not reported: Renal impairment, increased serum creatinine (due to inhibition of tubular secretion of creatinine)

Several prospective, observational, epidemiological studies reported an association with the use of abacavir and the risk of MI. Meta-analysis of randomized, controlled clinical trials showed no excess risk of MI in abacavir-treated patients as compared with control subjects. Overall, available data from observational studies and controlled clinical trials showed inconsistency; evidence for causal relationship between abacavir and risk of MI was inconclusive.