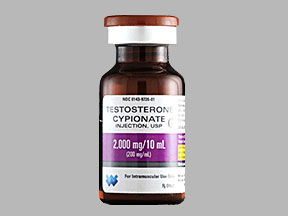 Testosterone is a naturally occurring sex hormone that is produced in a man's testicles. Small amounts of Testosterone are also produced in a woman's ovaries and adrenal system. Testosterone injection is used in men and boys to treat conditions caused by a lack of this hormone, such as delayed puberty or growth. It is only recommended for males with a known medical condition, such as a genetic disorder, problem with certain brain structures (called the hypothalamus and pituitary) or previous chemotherapy. Learn more

How much is my Testosterone cypionate co-pay with Medicare?

Ways to Save on Testosterone cypionate

Here are some ways that may lower the cost of your testosterone cypionate prescription.

Testosterone injection is used in men and boys to treat conditions caused by a lack of this hormone, such as delayed puberty or growth. It is only recommended for males with a known medical condition, such as a genetic disorder, problem with certain brain structures (called the hypothalamus and pituitary) or previous chemotherapy.

Testosterone injection is also used in women to treat certain types of breast cancer that have spread to other parts of the body.

Testosterone should not be used to enhance athletic performance or to treat normal male aging.

Do not use this medicine if you are pregnant or may become pregnant.

You should not receive testosterone if you have prostate cancer, male breast cancer, a serious heart condition, or severe liver or kidney disease.

Misuse of testosterone can cause dangerous or irreversible effects. Testosterone injections should be given only by a healthcare professional. Testosterone can lead to serious problems with the heart, brain, liver, endocrine, and mental health systems. Stopping testosterone may also lead to unpleasant withdrawal symptoms.

Testosterone injections have also been linked to a condition called pulmonary oil microembolism (POME), or a blood clot in the lung that can be fatal. Seek medical help immediately for symptoms including chest pain, dizziness, trouble breathing, urge to cough, throat tightening and fainting.

You should not receive testosterone if you are allergic to it, or if you have:

To make sure testosterone is safe for you, tell your doctor if you have:

This medicine can harm an unborn baby or cause birth defects. Do not use testosterone if you are pregnant or may become pregnant. Tell your doctor right away if you become pregnant during treatment. Use effective birth control while you are receiving this medicine.

It is not known whether testosterone passes into breast milk or if it could harm a nursing baby. You should not breast-feed while using this medicine.

How is testosterone injection given?

Testosterone is injected into a muscle. The injection is usually given every 2 to 4 weeks.

Testosterone injections should be given only by a healthcare professional. Misuse can lead to serious side effects or death.

The length of treatment will depend on the condition being treated.

Testosterone will not enhance athletic performance and should not be used for that purpose.

While receiving this medicine, you will need frequent blood tests.

Testosterone can affect bone growth in boys who are treated for delayed puberty. Bone development may need to be checked with x-rays every 6 months during treatment.

What happens if I miss a dose of Testosterone cypionate?

Since this medication is given by a healthcare professional in a medical setting, an overdose is unlikely to occur. If overdose does occur, it can lead to death. Seek medical attention immediately.

What happens if I overdose of Testosterone cypionate?

Since this medication is given by a healthcare professional in a medical setting, an overdose is unlikely to occur.

What should I avoid while receiving testosterone injection?

Follow your doctor's instructions about any restrictions on food, beverages, or activity.

Get emergency medical help if you have any signs of an allergic reaction to testosterone: hives; difficult breathing; swelling of your face, lips, tongue, or throat.

Get emergency medical help if you have any signs of a blood clot in the lung after using testosterone. These symptoms include chest pain, dizziness, trouble breathing, urge to cough, throat tightening and fainting.

Women receiving testosterone may develop male characteristics, which could be irreversible if treatment is continued. Call your doctor at once if you notice any of these signs of excess testosterone:

Common testosterone side effects (in men or women) may include:

What other drugs will affect testosterone?

Certain drugs may interact with testosterone, including;

Other prescription and over-the-counter medicines, vitamins, and herbal products may also react with testosterone. Tell each of your health care providers about all medicines you use now and any medicine you start or stop using.

Remember, keep this and all other medicines out of the reach of children, never share your medicines with others, and use this medicine only for the indication prescribed.

More frequently reported side effects include: deep vein thrombosis. See below for a comprehensive list of adverse effects.

Along with its needed effects, testosterone may cause some unwanted effects. Although not all of these side effects may occur, if they do occur they may need medical attention.

The most frequently reported side effects with testosterone topical are skin reaction (16.1%) and allergic contact dermatitis (up to 37%).