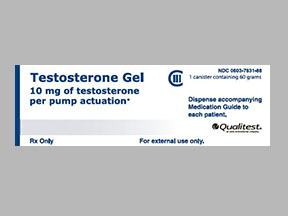 Testosterone is a naturally occurring sex hormone that is produced in a man's testicles. Small amounts of testosterone are also produced in a woman's ovaries and adrenal system. Testosterone injection is used in men and boys to treat conditions caused by a lack of this hormone, such as delayed puberty or growth. It is only recommended for males with a known medical condition, such as a genetic disorder, problem with certain brain structures (called the hypothalamus and pituitary) or previous chemotherapy. Learn more

How much is my Testosterone co-pay with Medicare?

Ways to Save on Testosterone

Here are some ways that may lower the cost of your testosterone prescription.

More frequently reported side effects include: deep vein thrombosis. See below for a comprehensive list of adverse effects.

Along with its needed effects, testosterone may cause some unwanted effects. Although not all of these side effects may occur, if they do occur they may need medical attention.

The most frequently reported side effects with testosterone topical are skin reaction (16.1%) and allergic contact dermatitis (up to 37%).