Tadalafil vs. Sildenafil: Which is Better?

Erectile dysfunction and benign prostatic hyperplasia, or enlarged prostate, are medical conditions that commonly affect men, particularly as they age.

While the conditions can be frustrating and embarrassing, they are also treatable with prescription medication.

Both tadalafil and sildenafil are used to treat erectile dysfunction and benign prostatic hyperplasia, or an enlarged prostate, in adult men over the age of 18.

Erectile dysfunction, also known as male impotence or ED, is a medical condition that makes it difficult for men to get or keep an erection due to limited blood flow or low blood pressure to the penis.

As a result, men suffering from erectile dysfunction experience decreased sexual stimulation and may have a difficult time engaging in sexual activity or achieving orgasm.

Erectile dysfunction is a complex condition that can be caused by a combination of physical, psychological, and lifestyle factors, which has made it historically difficult to treat.

Psychological factors, including anxiety, depression, and stress, can also contribute to erectile dysfunction.

Erectile dysfunction can be a sign of a serious health issue and should be discussed with your doctor for medical advice.

Benign prostatic hyperplasia, also known as an enlarged prostate, is a medical condition that commonly affects men as they age, particularly after the age of 50.

The condition can cause  uncomfortable urinary symptoms because the flow or urine from the bladder is blocked.

As a result, men suffering from the condition commonly experience symptoms that include a frequent or urgent need to urinate, a weak urine stream, a urine stream that stops and starts, increased frequency of urination at night, difficulty urinating, and inability to completely empty the bladder.

Tadalafil and sildenafil both belong to a class of drugs called phosphodiesterase type 5 inhibitors (also known as PDE-5 inhibitors).

During the first stage of an erection, the body releases a chemical called cGMP, which directs the tissues and smooth muscles of the penis to relax, allowing more blood to enter the penis.

Blood gets trapped inside the penis when it is relaxed, which causes an erection.

Eventually, a chemical called PDE-5 begins to breakdown the cGMP, causing the trapped blood to flow out of the penis and ending the erection as blood flow returns to normal.

However, men with erectile dysfunction may have their erections end prematurely or may not be able to start them at all.

Tadalafil and sildenafil inhibit the action of PDE-5, which prevents the body from breaking down cGMP prematurely.

As a result, the tissues in the penis stay relaxed and filled with blood, which make an erection last longer.

It’s important to note that tadalafil and sildenafil only work when an individual is sexually aroused, so you don’t have to worry about experiencing an erection when you don’t want one.

Most men start at a dose of 10 mg for the treatment of erectile dysfunction, but your doctor will prescribe the right dose for you based on the severity of the condition being treated, your age, medical history, and other factors.

Tadalafil can be taken either on an as-needed basis or daily.

When taken daily, most men take a dose of either 2.5 mg or 5 mg. Men who take tadalafil on an as-needed basis typically take a dose of 10 mg or 20 mg.

The maximum dosage of tadalafil is 40 mg.

Sildenafil citrate is offered in doses of 20 mg, with the maximum dose per day being 100 mg.

Most men start treatment for erectile dysfunction at a dose of 50 mg, but your doctor may prescribe you more or less of the medication based on your age, weight, specific medical history, and the severity of your condition.

It is common for patients to try a lower starting dose and increase to a higher dose later. 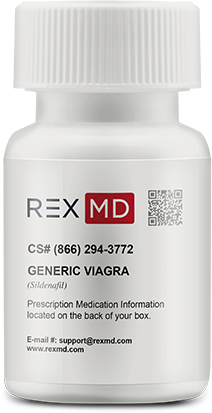 Welcome to Rex MD. We offer both branded and generic forms of Viagra (Sildenafil), Cialis (Tadalafil), and Levitra. Our healthcare professionals on the Rex MD platform are ready to recommend a treatment plan they believe will be most effective based on your symptoms and goals. You can also let your clinician know any preferences you have and it will be taken into consideration.

Start your free online visit to see if prescription ED treatment is right for you.

Both tadalafil and sildenafil are considered effective medications that can help many men improve their sexual dysfunction symptoms.

However, which product is more effective for you personally will vary depending on your individual needs and symptoms.

Tadalafil has the longest-lasting duration of action among erectile dysfunction medications (including among the other two common ED drugs vardenafil and avanafil) and can stay in your system for up to 36 hours, providing lots of time for spontaneous sex.

Additionally, tadalafil can be taken every day at a low dose, which works well for some men.

However, those with prescription medications that may result in active ingredient drug interactions with tadalafil may not be able to take the medication because of how long it lasts.

By contrast, sildenafil is taken 30 to 60 minutes before sex and can last for up to four hours, making it more suitable for men who take medications that would interfere with the drug if it remained in the bloodstream.

Although sildenafil can be taken once every 24 hours, most men use it on an as-needed basis and do not take the drug daily.

Tadalafil and sildenafil are both considered safe medications when taken by people with the appropriate medical history, but they are not appropriate for all individuals, which is why consulting with a healthcare provider prior to starting either drug is crucial.

People with the following medical conditions should not take tadalafil:

Likewise, some groups of people are not considered good candidates for sildenafil.

For example, patients taking medications called nitrates such as nitric oxide and nitroglycerin, which are typically used to treat chest pain, or guanylate cyclase stimulators such as Adempas (riociguat), which are typically used to treat pulmonary hypertension, are considered at risk of experiencing an unsafe drop in blood pressure when taking sildenafil and should not take the medication.

Some patients are also allergic to sildenafil and should not use the drug.

Patients with a previous history of heart problems or who are at risk of heart issues should use caution when taking sildenafil, as rare but serious side effects such as heart attack, stroke, irregular heartbeat, and death have occurred in men taking sildenafil.

Most of the side effects caused by tadalafil and sildenafil are quite similar, except that sildenafil is more likely to cause heart-related side effects, such as heart attack, stroke, and irregular heartbeat, than tadalafil.

For that reason, men with an existing history of heart problems may not be able to take sildenafil safely.

Medical attention should be sought immediately if any of the following side effects of tadalafil occur while engaged in sexual activity:

Other rarely reported, but serious, side effects of tadalafil requiring immediate medical attention include:

The side effects most commonly associated with sildenafil are similar to those of tadalafil and include:

Other rarely reported, but serious, side effects of sildenafil requiring immediate medical attention include:

Tadalafil and sildenafil are both effective treatments for erectile dysfunction and benign prostatic hyperplasia and can greatly improve the quality of life for many men.