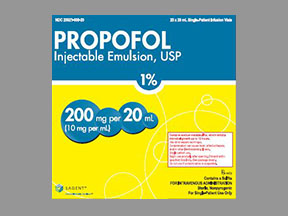 Propofol (Diprivan) slows the activity of your brain and nervous system. Propofol is used to put you to sleep and keep you asleep during general anesthesia for surgery or other medical procedures. It is used in adults as well as children 2 months and older. Propofol is also used to sedate a patient who is under critical care and needs a mechanical ventilator (breathing machine). Before you receive propofol, tell your doctor about all your medical conditions and allergies. Also make sure your doctor knows if you are pregnant or breast-feeding. In some cases, you may not be able to use propofol. Learn more

Rare (Less than 0.1%): Discoloration of the urine following prolonged use

Rare (0.01% to 0.1%): Anaphylaxis, in some cases with angioedema, bronchospasm, erythema, and hypotension (these reactions have been reported to respond to adrenaline)

Very rare (less than 0.01%): Rhabdomyolysis (when administered at doses greater than 4 mg/kg/hour for ICU sedation)

Paresthesias (including burning, tingling, stinging) and/or pruritus, usually manifested in the perineal region, were the most frequently recorded adverse reactions in clinical trials. Paresthesias and pruritus generally occurred within 5 minutes after administration of the initial dose and were generally transient and mild to moderate in intensity. The pharmacologic basis of these sensory phenomena is unknown. No pretreatments, including the use of nonsteroidal anti-inflammatory drugs, opioids, or lidocaine, are known to have an effect on or to reduce the incidence of these sensations.