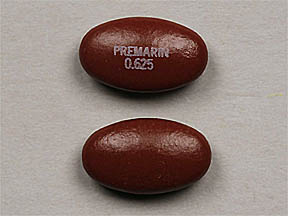 Premarin tablets contain conjugated estrogens, a mixture of estrogen hormones. Estrogen is a female sex hormone produced by the ovaries. Estrogen is necessary for many processes in the body. Premarin is used to treat menopause symptoms such as hot flashes and vaginal changes, and to prevent osteoporosis (bone loss) in menopausal women. Premarin is also used to replace estrogen in women with ovarian failure or other conditions that cause a lack of natural estrogen in the body. Do not use if you are pregnant. Learn more

How much is my Premarin co-pay with Medicare?

Ways to Save on Premarin

Here are some ways that may lower the cost of your premarin prescription.

Note: This document contains side effect information about conjugated estrogens. Some of the dosage forms listed on this page may not apply to the brand name Premarin.

Along with its needed effects, conjugated estrogens (the active ingredient contained in Premarin) may cause some unwanted effects. Although not all of these side effects may occur, if they do occur they may need medical attention.

Check with your doctor immediately if any of the following side effects occur while taking conjugated estrogens:

-HRT is associated with a 1.3 to 3-fold increased relative risk of developing VTE, i.e., deep vein thrombosis or pulmonary embolism. This event is more likely to occur in the first year of using HRT.

-The use of estrogen-only and estrogen-progestin therapy is associated with an up to 1.5 fold increased relative risk of ischemic stroke.

-The risk of hemorrhagic stroke is not increased during use of HRT. This relative risk is not dependent on age or on duration of use, but as the baseline risk is strongly age-dependent, the overall risk of stroke in women who use HRT will increase with age.

Rare (less than 0.1%): Anaphylactic/anaphylactoid reactions including urticaria and angioedema

Uncommon (0.1% to 1%): Intolerance to contact lenses, steepening of corneal curvature

-An up to 2-fold increased risk of having breast cancer diagnosed is reported in women taking combined estrogen-progestin therapy for more than 5 years.

-Endometrial cancer risk is about 5 in every 1000 women with a uterus not using HRT.

-In women with a uterus, use of estrogen-only HRT is not recommended because it increases the risk of endometrial cancer.

-Depending on the duration of estrogen-only use and estrogen dose, the increase in risk of endometrial cancer varied from between 5 and 55 extra cases diagnosed in every 1000 women between the ages of 50 and 65.

-Adding a progestin to estrogen-only therapy for at least 12 days per cycle can prevent this increased risk. In the Million Women Study the use of five years of combined HRT did not increase risk of endometrial cancer.

-Long-term use of estrogen-only and combined estrogen-progestin HRT has been associated with a slightly increased risk of ovarian cancer. In the Million Women Study 5 years of HRT resulted in 1 extra case per 2500 users.