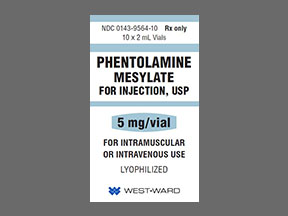 What do I need to tell my doctor BEFORE I take Phentolamine?

This is not a list of all drugs or health problems that interact with phentolamine.

What are some things I need to know or do while I take Phentolamine?

For all uses of phentolamine:

How is this medicine (Phentolamine) best taken?

Use phentolamine as ordered by your doctor. Read all information given to you. Follow all instructions closely.

What are some other side effects of Phentolamine?

How do I store and/or throw out Phentolamine?

Along with its needed effects, phentolamine may cause some unwanted effects. Although not all of these side effects may occur, if they do occur they may need medical attention.

Check with your doctor immediately if any of the following side effects occur while taking phentolamine:

Some side effects of phentolamine may occur that usually do not need medical attention. These side effects may go away during treatment as your body adjusts to the medicine. Also, your health care professional may be able to tell you about ways to prevent or reduce some of these side effects.

Phentolamine injected into the penis may cause tingling at the tip of the penis. This is no cause for concern.

Cardiovascular side effects have included hypotension due to reduced peripheral vascular resistance. This has been a significant cardiovascular complication of phentolamine therapy in some cases. Acute and prolonged hypotensive episodes with reflex tachycardia and cardiac arrhythmias have been reported. Overdosage has been characterized primarily by cardiac arrhythmias, tachycardia and severe hypotension or shock.

If severe hypotension develops, prompt elevation of the patient's legs, infusion of IV fluids and/or volume expanders, and, if necessary, an infusion of norepinephrine (titrated to an acceptable blood pressure) is recommended. Epinephrine should not be used since it may cause a paradoxical reduction in BP.

Nervous system side effects have included weakness and dizziness. Anxiety, headache, pupillary contraction and visual disturbances are signs of toxicity.

Respiratory system side effects have included nasal stuffiness, probably due to peripheral vasodilation.

Gastrointestinal side effects have included nausea, vomiting, and diarrhea.

Genitourinary side effects among male patients who directly inject the penile cavernous body have included prolonged erections/priapism, fibrous plaque formation, severe local pain, cavernositis, urethritis, ecchymosis with hematoma, gross hematuria, and hematospermia. Urinary incompetence has not been reported, although the drug has been used to successfully treat urinary obstruction due to benign prostatic hypertrophy.

Hepatic side effects have included transient hepatic abnormalities, manifested as elevations in liver function tests, with direct injection of phentolamine and papaverine in 0.4% to 40% of men with erectile impotence.

Metabolic side effects have included hypoglycemia. This was probably due to stimulation of insulin as a result of alpha-adrenergic blockade.