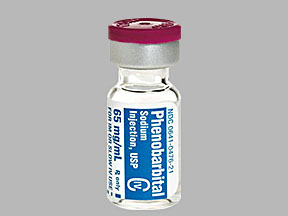 Prices and coupons of Phenobarbital sodium

Phenobarbital is a barbiturate (bar-BIT-chur-ate). Phenobarbital slows the activity of your brain and nervous system.

Phenobarbital may also be used for purposes not listed in this medication guide.

You should not use phenobarbital if you have severe liver disease, severe asthma or COPD, a personal or family history of porphyria, or a history of addiction to drugs similar to phenobarbital.

You should not take phenobarbital if you are allergic to phenobarbital or other barbiturates (Nembutal, Seconal, and others), or if you have:

To make sure phenobarbital is safe for you, tell your doctor if you have:

Follow your doctor's instructions about taking seizure medication if you are pregnant. Seizure control is very important during pregnancy, and having a seizure could harm both mother and baby. Do not start or stop taking this medicine without your doctor's advice, and tell your doctor right away if you become pregnant.

It is not known whether phenobarbital passes into breast milk or if it could harm a nursing baby. Tell your doctor if you are breast-feeding a baby.

How should I take phenobarbital?

Follow all directions on your prescription label. Do not take this medicine in larger or smaller amounts or for longer than recommended.

Phenobarbital may be habit-forming. Never share phenobarbital with another person, especially someone with a history of drug abuse or addiction. Keep the medication in a place where others cannot get to it. Selling or giving away this medicine is against the law.

Do not change your phenobarbital dose without your doctor's advice. Tell your doctor if the medicine does not seem to work as well in treating your condition.

If you are taking phenobarbital to treat seizures, keep taking the medicine even if you feel fine.

Do not stop using suddenly after long-term use, or you could have unpleasant withdrawal symptoms. Ask your doctor how to safely stop using phenobarbital.

Keep track of the amount of medicine used from each new bottle. Phenobarbital is a drug of abuse and you should be aware if anyone is using your medicine improperly or without a prescription.

Seek emergency medical attention or call the Poison Help line at 1-800-222-1222. An overdose of phenobarbital can be fatal.

What should I avoid while taking phenobarbital?

Drinking alcohol with phenobarbital can cause side effects.

Side effects such as confusion, depression, or excitement may be more likely in older adults and those who are ill or debilitated.

What other drugs will affect phenobarbital?

Other drugs may interact with phenobarbital, including prescription and over-the-counter medicines, vitamins, and herbal products. Tell each of your health care providers about all medicines you use now and any medicine you start or stop using.

The most commonly reported side effect was somnolence.

Drowsiness/sedation tended to decrease with continued use.

Localized or diffuse neuralgic pain occurred, especially in psychoneurotic patients with insomnia. This pain was most frequently located in the neck, shoulders, and upper limbs and appeared in paroxysms that were most intense early in the morning. In some patients, the pain continued for days after discontinuation of this drug.

Some patients have experienced paradoxical excitement, restlessness, or delirium in the presence of pain.

Antiepileptic hypersensitivity syndrome typically occurred 1 to 8 weeks after first exposure or within 1 day of rechallenge. This syndrome may have cross reactivity with other antiepileptic agents.

Skin eruptions may be associated with fever, delirium, and marked changes in the liver and other organs.

Localized or diffuse myalgic or arthritic pain occurred, especially in psychoneurotic patients with insomnia. This pain was most frequently located in the neck, shoulders, and upper limbs and appeared in paroxysms that were most intense early in the morning. In some patients, pain continued for days after discontinuation of therapy.

Megaloblastic anemia occurred after chronic use of this drug, and may be due to folate deficiency.

Methemoglobinemia has occurred in infants nursed by mothers receiving this drug.

Bronchospasm and laryngospasm were reported, especially in patients given the IV formulation.

Hypersensitivity reactions generally consisted of acquired hypersensitivity. Patients with a higher risk of developing reactions were more likely to have asthma, urticaria, and angioedema.