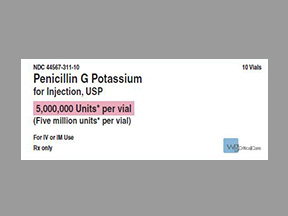 Pfizerpen is a fast-acting antibiotic that fights bacteria in your body. Pfizerpen is used to treat many different types of severe infections, including strep and staph infections, diphtheria, meningitis, gonorrhea, and syphilis. Pfizerpen is also used to prevent infections of the heart valves in people with certain heart conditions who need to have dental work or surgery. Pfizerpen may also be used for purposes not listed in this medication guide. Follow all directions on your medicine label and package. Tell each of your healthcare prOviders about all your medical conditions, allergies, and all medicines you use. Learn more

Note: This document contains side effect information about penicillin g potassium. Some of the dosage forms listed on this page may not apply to the brand name Pfizerpen.

For all uses of this drug:

Injection (if given in the muscle):

Allergic reactions have been reported with all penicillins and the incidence ranged from 0.7% to 10% in studies.

Hypersensitivity reactions with penicillin are more common and more serious with intravenous therapy, but have also been reported with oral therapy. An initial sensitizing exposure is required to stimulate the production of antigen-specific IgE before clinical manifestations of hypersensitivity are seen on the second exposure. There are numerous "hidden" environmental or occupational exposures to penicillin including in utero exposure, breast milk exposure, and occupational exposure.

Immediate anaphylactic reactions were very rare and generally occurred after parenteral therapy; however, a few cases of anaphylaxis have been reported after oral therapy.

Delayed reactions to penicillin have been reported within 1 to 2 weeks after therapy was started.

Gastrointestinal side effects have included Clostridium difficile associated diarrhea and pseudomembranous colitis; onset has occurred during or after therapy. Nausea, vomiting, diarrhea, stomatitis, black or hairy tongue, and other symptoms of gastrointestinal irritation have been reported, especially during oral therapy.

Severe neurologic reactions were most often seen with penicillin doses of 18 million to 80 million units daily. These reactions frequently abated after discontinuation of penicillin. In several cases, penicillin was restarted at a lower dose with no further sequelae. In one review, the authors found that cerebral spinal fluid (CSF) penicillin levels were higher in patients with seizures than in those without. CSF penicillin levels ranged from 12 to 61 units/mL in the seizure group with the highest CSF concentrations, compared to 7.8 units/mL in the group without seizures.

Renal tubular damage and interstitial nephritis resolved in most patients after penicillin G was discontinued.

Nephropathy has been reported rarely and was usually associated with high intravenous dosage.

Hemolytic anemia, leukopenia, and thrombocytopenia have been reported rarely and were usually associated with high intravenous dosage.

Neutropenia resolved after penicillin was discontinued.

Coombs-positive hemolytic anemia (an uncommon reaction) was reported in patients treated with greater than 10 million units/day of intravenous penicillin G and who previously received large doses of the drug.

Genitourinary side effects have included hematuria, proteinuria, and eosinophiluria.

Dermatologic side effects have included rash and urticaria. Contact dermatitis has been reported in those who prepared penicillin solutions.

A 28-year-old female developed jaundice, fever, epidermolysis, abnormal liver function tests, and cholestasis several days after receiving a single dose of penicillin intramuscularly. Her liver dysfunction continued for up to 18 months. She had taken acetaminophen concurrently but denied alcohol use.