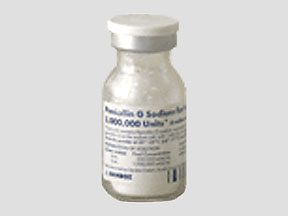 What is penicillin G sodium?

Penicillin G sodium is a fast-acting antibiotic that fights bacteria in your body.

Penicillin G sodium may also be used for purposes not listed in this medication guide.

You should not use penicillin G sodium if you are allergic to penicillin. Tell your doctor if you have ever had an allergic reaction to a cephalosporin antibiotic such as Ceftin, Cefzil, Omnicef, Keflex, and others.

To make sure penicillin G sodium is safe for you, tell your doctor if you have:

Penicillin G sodium is not expected to harm an unborn baby. Tell your doctor if you are pregnant or plan to become pregnant during treatment.

Penicillin G sodium can pass into breast milk and may harm a nursing baby. Tell your doctor if you are breast-feeding a baby.

How is penicillin G sodium given?

Penicillin G sodium is injected into a muscle or into a vein through an IV. You may be shown how to use an injection at home. Do not self-inject this medicine if you do not fully understand how to give the injection and properly dispose of used needles, IV tubing, and other items used to inject the medicine.

Penicillin G sodium is a powder medicine that must be mixed with a liquid (diluent) before using it. Shake the mixture well before you measure a dose. If you are using the injections at home, be sure you understand how to properly mix and store the medicine.

Prepare your dose only when you are ready to give yourself an injection. Do not use penicillin G sodium if it has changed colors or has particles in it. Call your pharmacist for new medication.

Use this medicine for the full prescribed length of time. Your symptoms may improve before the infection is completely cleared. Some infections may need to be treated for several weeks. Skipping doses may also increase your risk of further infection that is resistant to antibiotics. Penicillin G sodium will not treat a viral infection such as the flu or a common cold.

If you use penicillin G sodium long-term, your blood may need to be tested to make sure the medicine is not causing harmful effects. Your kidney or liver function may also need to be tested.

After you have finished your treatment with penicillin G sodium, your doctor may want to do tests to make sure your infection has completely cleared up.

Store the powder medicine at room temperature away from moisture and heat.

After mixing penicillin G sodium with a diluent, store in the refrigerator and use it within 3 days. Do not freeze.

What happens if I miss a dose of Penicillin g sodium?

Call your doctor for instructions if you miss a dose of penicillin G sodium.

Overdose symptoms may include confusion, agitation, hallucinations, or seizure (convulsions).

What should I avoid while taking penicillin G sodium?

Antibiotic medicines can cause diarrhea, which may be a sign of a new infection. If you have diarrhea that is watery or bloody, stop taking this medication and call your doctor. Do not use anti-diarrhea medicine unless your doctor tells you to.

Get emergency medical help if you have signs of an allergic reaction: hives, itching; feeling like you might pass out; difficulty breathing; swelling of your face, lips, tongue, or throat.

What other drugs will affect penicillin G sodium?

Other drugs may interact with penicillin G sodium, including prescription and over-the-counter medicines, vitamins, and herbal products. Tell each of your health care providers about all medicines you use now and any medicine you start or stop using.

Get emergency medical help if you have signs of an allergic reaction: hives, itching; feeling like you might pass out; difficulty breathing; swelling of your face, lips, tongue, or throat.

This is not a complete list of side effects and others may occur. Call your doctor for medical advice about side effects.

Allergic reactions have been reported with all penicillins and the incidence ranged from 0.7% to 10% in studies. Hypersensitivity reactions with penicillin were more common and more serious with IV therapy, but have also been reported with oral therapy. An initial sensitizing exposure is required to stimulate the production of antigen-specific IgE before clinical manifestations of hypersensitivity are seen on the second exposure. There are numerous "hidden" environmental or occupational exposures to penicillin including in utero exposure, breast milk exposure, and occupational exposure.

The Jarisch-Herxheimer reaction has been reported during penicillin treatment in patients with syphilis or other spirochetal infections. It has started 1 to 2 hours after initiation of therapy and has stopped within 12 to 24 hours. The Herxheimer reaction may be due to the release of heat-stable pyrogen from spirochetes.

Encephalopathy occurred after IV doses greater than 60 g. As the blood brain barrier became more permeable in meningitis, toxic symptoms were precipitated by lower doses of penicillin in patients with meningitis.

Severe neurologic reactions were most often seen with penicillin doses of 18 million to 80 million units daily. These reactions frequently abated after discontinuation of penicillin. In several cases, penicillin was restarted at a lower dose with no further sequelae. In 1 review, the authors found that cerebral spinal fluid (CSF) penicillin levels were higher in patients with seizures than in those without. CSF penicillin levels ranged from 12 to 61 units/mL in the seizure group with the highest CSF levels, compared to 7.8 units/mL in the group without seizures.

Hemolytic anemia, granulocytopenia (neutropenia), agranulocytosis, leukopenia, and thrombocytopenia have been reported with prolonged high doses of this drug.

Coombs-positive hemolytic anemia (an uncommon reaction) was reported in patients treated with more than 10 million units/day of IV penicillin G (benzylpenicillin) and who previously received large doses of the drug.

Interstitial nephritis has occurred after IV use of this drug at doses higher than 12 g/day.

Renal tubular damage and interstitial nephritis have been reported with large IV doses of penicillin G; symptoms of this reaction included fever, rash, eosinophilia, proteinuria, eosinophiluria, hematuria, and increased serum urea nitrogen and resolved in most patients after penicillin G was discontinued.

Nephropathy has been reported in patients administered 12 to 36 g of penicillin G for several days.

High doses of this drug have resulted in congestive heart failure due to high sodium intake.

Nausea, vomiting, stomatitis, black or hairy tongue, and other symptoms of GI irritation have been reported, especially during oral therapy.

Contact dermatitis has been reported in those who prepared penicillin solutions.

Skin eruptions (maculopapular to exfoliative dermatitis), pruritus, and urticaria have been associated with hypersensitivity reactions.

Serious and sometimes fatal electrolyte disturbances have been reported with large IV doses; 1 million units of this drug contains 1.68 mEq of sodium ion.

A 28-year-old female developed jaundice, fever, epidermolysis, abnormal liver function tests, and cholestasis several days after receiving a single IM penicillin dose. Her liver dysfunction continued for up to 18 months. She had taken acetaminophen concurrently but denied alcohol use.

Blurred vision and blindness have been associated with parenteral administration.