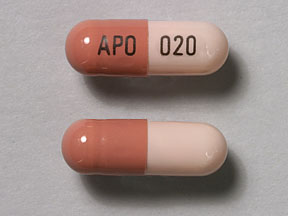 Omeprazole is a proton pump inhibitor that decreases the amount of acid produced in the stomach. Omeprazole is used to treat symptoms of gastroesophageal reflux disease (GERD) and other conditions caused by excess stomach acid. It is also used to promote healing of erosive esophagitis (damage to your esophagus caused by stomach acid). Omeprazole may also be given together with antibiotics to treat gastric ulcer caused by infection with Helicobacter pylori (H. pylori). Over-the-counter (OTC) omeprazole is used to help control heartburn that occurs 2 or more days per week. The OTC brand of omeprazole must be taken as a course on a regular basis for 14 days in a row. Learn more

How much is my Omeprazole co-pay with Medicare?

Ways to Save on Omeprazole

Here are some ways that may lower the cost of your omeprazole prescription.

Along with its needed effects, omeprazole may cause some unwanted effects. Although not all of these side effects may occur, if they do occur they may need medical attention.

Check with your doctor immediately if any of the following side effects occur while taking omeprazole:

Get emergency help immediately if any of the following symptoms of overdose occur while taking omeprazole:

The most commonly reported side effects included headache, abdominal pain, nausea, and diarrhea.

Otitis media occurred most frequently in patients 1 month to less than 1 year of age.

Fever most commonly occurred in patients 1 to less than 2 years of age.

Accidental injury most commonly occurred in patients 2 to 16 years of age.

Taste perversion most commonly occurred in patients given concomitant treatment with clarithromycin.

Hemorrhagic necrotic gastritis has been reported in pediatric patients.

Diarrhea most commonly occurred in patients given concomitant treatment with clarithromycin and amoxicillin.

Benign gastric fundic gland polyps appeared to be reversible when omeprazole was discontinued.

Severe hypomagnesemia may result in hypocalcemia, and this condition may be associated with hypokalemia.

Hypokalemia was reported in pediatric patients.

Irreversible visual impairment has been reported in critically ill patients who generally received high doses of the IV formulation as a bolus; however, no causal relationship has been established.

A causal relationship between this drug and impotence has not been established.

Gastroduodenal carcinoids have been reported in patients with Zollinger-Ellison syndrome on long-term therapy. This condition may be a manifestation of the underlying condition, which is known to be associated with tumors.