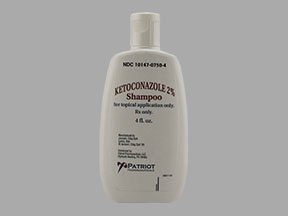 Prices and coupons of Nizoral

Nizoral (ketoconazole) is an antifungal medication that fights infections caused by fungus.

Nizoral should be used only when you cannot use other antifungal medications. Ketoconazole can cause serious harm to your liver that may result in liver transplant or cause death.

Nizoral should be used only when you cannot use other antifungal medications. Ketoconazole can cause serious harm to your liver that may result in liver transplant or cause death.

Call your doctor at once if you have any signs of liver damage, such as nausea, vomiting, stomach pain, fever, tiredness, loss of appetite, dark urine, clay-colored stools, or jaundice (yellowing of the skin or eyes).

Tell your doctor about all your current medicines and any you start or stop using. Many drugs can interact, and some drugs should not be used together.

Nizoral can also cause a serious heart problem. Call your doctor right away if you have fast or pounding heartbeats, shortness of breath, and sudden dizziness.

You should not use Nizoral if you are allergic to ketoconazole, or if you have liver disease.

Some medicines can cause unwanted or dangerous effects when used with ketoconazole. Your doctor may change your treatment plan if you also use:

To make sure Nizoral is safe for you, tell your doctor if you have:

It is not known whether this medicine will harm an unborn baby. Tell your doctor if you are pregnant.

How should I take Nizoral?

Take Nizoral exactly as it was prescribed for you. Follow all directions on your prescription label and read all medication guides or instruction sheets. Your doctor may occasionally change your dose.

Your doctor will perform blood tests to make sure you do not have conditions that would prevent you from safely using Nizoral.

You may need to use this medicine for up to 6 months.

Use this medicine for the full prescribed length of time, even if your symptoms quickly improve. Skipping doses can increase your risk of infection that is resistant to medication. Ketoconazole will not treat a viral infection such as the flu or a common cold.

While using Nizoral, you may need frequent blood tests to check your liver function.

Do not share this medicine with another person, even if they have the same symptoms you have.

What should I avoid while taking Nizoral?

Do not drink alcohol. Dangerous side effects could occur.

Ketoconazole could make you sunburn more easily. Avoid sunlight or tanning beds. Wear protective clothing and use sunscreen (SPF 30 or higher) when you are outdoors.

Get emergency medical help if you have signs of an allergic reaction to Nizoral (hives, fever, chest pain, difficult breathing, swelling in your face or throat) or a severe skin reaction (fever, sore throat, burning eyes, skin pain, red or purple skin rash with blistering and peeling).

Common Nizoral side effects may include:

What other drugs will affect Nizoral?

Some medicines can make it harder for your body to absorb ketoconazole. If you take an antacid, take it 1 hour before or 2 hours after you take Nizoral. Tell your doctor if you also take a stomach acid reducer, such as Nexium, Prevacid, Prilosec, Protonix, Zantac, and others.

Nizoral can cause a serious heart problem. Your risk may be higher if you also use certain other medicines for infections, asthma, heart problems, high blood pressure, depression, mental illness, cancer, malaria, or HIV.

Many drugs can interact with ketoconazole. This includes prescription and over-the-counter medicines, vitamins, and herbal products. Not all possible interactions are listed here. Tell your doctor about all your current medicines and any medicine you start or stop using.

Remember, keep this and all other medicines out of the reach of children, never share your medicines with others, and use Nizoral only for the indication prescribed.

Note: This document contains side effect information about ketoconazole. Some of the dosage forms listed on this page may not apply to the brand name Nizoral.

Ketoconazole tablets should only be used when other antifungal therapies are unavailable or not tolerated, and the potential benefits of treatment outweigh its risks. Serious hepatotoxicity, including cases with a fatal outcome or requiring liver transplantation has occurred with the use of oral ketoconazole, even in patients with no obvious risk factors for liver disease. Patients who receive this drug should be informed by the physician of the risk and should be closely monitored. Coadministration of ketoconazole with dofetilide, quinidine, pimozide, cisapride, methadone, disopyramide, dronedarone, and ranolazine is contraindicated, as ketoconazole can cause increased plasma concentrations of these drugs and may prolong QT intervals, sometimes resulting in life-threatening ventricular dysrhythmias such as torsades de pointes.

Along with its needed effects, ketoconazole (the active ingredient contained in Nizoral) may cause some unwanted effects. Although not all of these side effects may occur, if they do occur they may need medical attention.

Check with your doctor immediately if any of the following side effects occur while taking ketoconazole:

Ketoconazole therapy has commonly been associated with transient elevations in liver enzymes, which have resolved despite continued therapy.

Serious hepatotoxicity has been reported with both high doses for short durations and low doses for long therapy durations. Hepatic injury has usually (but not always) been reversible with discontinuation of ketoconazole (the active ingredient contained in Nizoral) therapy. Hepatitis has been reported in children.

Hepatotoxicity has been reported with oral ketoconazole rechallenge.

Severe hepatotoxicity (hepatocellular, cholestatic, or mixed) generally occurred after 1 or 2 months of therapy. Hepatic function usually returned to normal within 1 month, but cases of hepatic failure and death have occurred.

Ketoconazole inhibits hydroxylation of deoxycortisol, which results in diminished cortisol production, especially when given in divided doses. In some patients, symptomatic adrenal insufficiency may occur, presenting with hyponatremia, hyperkalemia, hypotension, lethargy, depression, and malaise.

A 77-year-old male with prostate cancer experienced adrenal crisis coincident with ketoconazole (the active ingredient contained in Nizoral) therapy. He presented with progressive right lower extremity weakness, debilitating low back pain, and a serum prostate-specific antigen level of 78.8 ng/mL. He was given ketoconazole 200 mg orally four times daily to reduce serum testosterone levels. Nine days after initiating ketoconazole therapy, he experienced generalized weakness, abdominal pain, nausea with vomiting, and severely diminished mentation. The urology service was advised of the patient's admission and suggested that adrenal insufficiency related to high-dose ketoconazole therapy should be considered in the differential diagnosis. However, a serum cortisol level was not obtained prior to steroid treatment. An ACTH stimulation test performed 2 days later showed no evidence of underlying adrenal insufficiency when the patient was no longer being given ketoconazole.

Gastrointestinal intolerance may resolve with continued therapy and may improve if ketoconazole is taken with food.

A 23-year-old female with vaginal discharge experienced fatal aplastic anemia coincident with ketoconazole (the active ingredient contained in Nizoral) therapy. She was admitted with widespread purpuric lesions on her face, arms, and legs. She had taken ketoconazole 200 mg twice daily for vaginal discharge for 4 days before admission. Ketoconazole was discontinued on admission. The patient was diagnosed with aplastic anemia based on clinical findings. The patient did not respond to therapy and died of disseminated candidiasis 2 months later.

A 72-year-old female with a Candida albicans infection experienced a severe reaction of refractory anaphylactic shock coincident with ketoconazole (the active ingredient contained in Nizoral) therapy. She was initially given oral ketoconazole 200 mg twice daily. She developed hypotension over the first 2 days of treatment (BP 136/82 mmHg at baseline; 90/50 mmHg on day 2). Severe hypotension (BP 90/49 mmHg) unresponsive to fluid therapy or high-dose dopamine developed on day 4 of treatment. When laboratory tests revealed a high level of plasma tryptase, anaphylactic redistribution shock was diagnosed. Her vital signs became more stable after therapy with hydrocortisone and epinephrine infusion.

Gynecomastia and breast tenderness have been reported in male patients. Gynecomastia in males resulted from decreased steroidogenesis and testosterone production, which led to an increased estrogen to testosterone ratio.

Postmarketing reports: Erectile dysfunction, azoospermia (with doses higher than recommended dose of 200 to 400 mg per day)

Paranoid delusions have been reported in a patient treated with ketoconazole (the active ingredient contained in Nizoral) for cutaneous leishmaniasis.