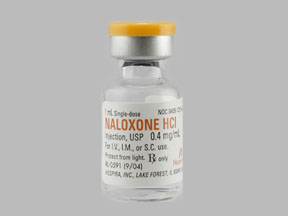 Naloxone blocks or reverses the effects of opioid medication, including extreme drowsiness, slowed breathing, or loss of consciousness. An opioid is sometimes called a narcotic. Naloxone nasal (for use in the nose) is used to treat a narcotic overdose in an emergency situation. naloxone should not be used in place of emergency medical care for an overdose. Naloxone nasal is also used to help diagnose whether a person has used an overdose of an opioid. Naloxone nasal may also be used for purposes not listed in this medication guide. Learn more

What is naloxone nasal?

Naloxone blocks or reverses the effects of opioid medication, including extreme drowsiness, slowed breathing, or loss of consciousness. An opioid is sometimes called a narcotic.

Naloxone nasal (for use in the nose) is used to treat a narcotic overdose in an emergency situation. naloxone should not be used in place of emergency medical care for an overdose.

Naloxone nasal is also used to help diagnose whether a person has used an overdose of an opioid.

Naloxone nasal may also be used for purposes not listed in this medication guide.

In an emergency situation it may not be possible to tell your caregivers about your health conditions. Make sure any doctor caring for you afterward knows you have received this medicine.

You should not be treated with naloxone if you are allergic to it.

If possible before you receive naloxone, tell your doctor if you have heart disease.

It is not known whether naloxone will harm an unborn baby. Tell your doctor if you are pregnant.

It is not known whether naloxone nasal passes into breast milk or if it could harm a nursing baby. Tell your doctor if you are breast-feeding a baby.

In an emergency situation it may not be possible to tell your caregivers if you are pregnant or breast-feeding. Make sure any doctor caring for your pregnancy or your baby knows you have received this medicine.

How should I use naloxone nasal?

Follow all directions on your prescription label. Do not use this medicine in larger or smaller amounts or for longer than recommended.

This medicine may be given by a healthcare provider, emergency medical provider, or a family member or caregiver who is trained to properly give naloxone nasal.

Naloxone nasal should be sprayed into the nose while the person is lying on his or her back.

If you are a caregiver or family member giving naloxone nasal to another person, read all instructions when you first get this medicine. Read all caregiver information, medication guides, and instruction sheets provided with this medicine. Ask your doctor or pharmacist if you have any questions.

Be sure you know how to recognize the signs of an opioid overdose in the person you are caring for. Overdose symptoms may include:

Even if you are not sure an opioid overdose has occurred, if the person is not breathing or is unresponsive, give naloxone nasal right away and then seek emergency medical care.

Do not assume that an overdose episode has ended if symptoms improve. You must get emergency help after giving naloxone nasal. You may need to perform CPR (cardiopulmonary resuscitation) on the person while you are waiting for emergency help to arrive.

After giving this medicine, stay with the person and watch for continued signs of overdose. You may need to give another dose every 2 to 3 minutes until emergency help arrives. Follow all medication instructions carefully.

Each single-use spray pump contains enough naloxone nasal for one use only. Throw away after one use, even if there is still some medicine left in the pump after using a dose.

Store at room temperature away from moisture and heat. Keep each spray pump in the box until you are ready to give a dose. Do not use this medicine if the expiration date on the label has passed.

What happens if I miss a dose of Naloxone hydrochloride?

Because you will receive naloxone in an emergency situation, you are not likely to miss a dose.

Since each spray pump contains only enough naloxone nasal for one dose, an overdose is unlikely to occur.

What should I avoid while taking naloxone nasal?

Avoid leaving a person alone after giving him or her a dose of naloxone nasal. An overdose can impair a person's thinking or reactions.

Because naloxone nasal reverses opioid effects, naloxone may cause sudden withdrawal symptoms such as:

What other drugs will affect naloxone nasal?

Other drugs may interact with naloxone, including prescription and over-the-counter medicines, vitamins, and herbal products. Tell your doctor about all your current medicines and any medicine you start or stop using.

Along with its needed effects, naloxone may cause some unwanted effects. Although not all of these side effects may occur, if they do occur they may need medical attention.

Check with your doctor immediately if any of the following side effects occur while taking naloxone:

Death, coma, and encephalopathy have been reported as a result of abrupt postoperative reversal of opioid depression, primarily in patients with preexisting cardiovascular disorders or in those who received other drugs with similar adverse cardiovascular effects.

It has been suggested that pulmonary edema may be due to a centrally mediated massive catecholamine response leading to a dramatic shift of blood volume into the pulmonary vascular bed resulting in increased hydrostatic pressures.

Musculoskeletal pain was one of the more commonly reported adverse reactions in clinical trials with naloxone nasal spray.