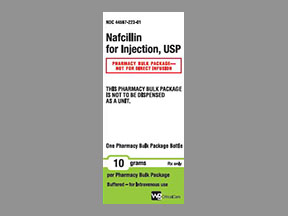 Nafcillin is a penicillin antibiotic is used to treat many different types of infections, especially those caused by staphylococcus bacteria ("staph" infections). Nafcillin may also be used for purposes not listed in this medication guide. You should not use Nafcillin if you are allergic to any penicillin antibiotic. You should not use this medicine if you are allergic to Nafcillin or similar antibiotics, such as: Amoxicillin (Amoxil, Augmentin, and others); Ampicillin; dicloxacillin; oxacillin; or Learn more

Nafcillin is a penicillin antibiotic is used to treat many different types of infections, especially those caused by staphylococcus bacteria ("staph" infections).

Nafcillin may also be used for purposes not listed in this medication guide.

You should not use nafcillin if you are allergic to any penicillin antibiotic.

You should not use this medicine if you are allergic to nafcillin or similar antibiotics, such as:

Nafcillin can pass into breast milk and may harm a nursing baby. Tell your doctor if you are breast-feeding a baby.

How is nafcillin given?

Nafcillin is given as an infusion into a vein, or injected into a muscle. A healthcare provider will give your first dose and may teach you how to properly use the medication by yourself.

Infusion into a vein can take 30 to 60 minutes to complete.

Read and carefully follow any Instructions for Use provided with your medicine. Ask your doctor or pharmacist if you don't understand all instructions.

Nafcillin powder must be mixed with a liquid (diluent) before using it.

If you inject into a muscle, give the injection right away after mixing the powder and diluent.

If you inject into a vein, you may store the mixture at room temperature for up to 3 days, or in a refrigerator for up to 7 days. Do not use if the mixture has changed colors or has particles in it. Call your pharmacist for new medicine.

Store unmixed nafcillin powder at room temperature away from moisture and heat.

Your medicine may also be supplied as a premixed solution that has been frozen in a plastic container.

Take the medicine out of the freezer and let it reach room temperature before injecting your dose. You may also thaw the medicine in a refrigerator. Do not use heat to thaw frozen nafcillin.

Use nafcillin for the full prescribed length of time, even if your symptoms quickly improve. Skipping doses can increase your risk of infection that is resistant to medication. Nafcillin will not treat a viral infection such as the flu or a common cold.

What happens if I miss a dose of Nafcillin sodium?

Use the medicine as soon as you can, but skip the missed dose if it is almost time for your next dose. Do not use two doses at one time.

What should I avoid while using nafcillin?

Get emergency medical help if you have signs of an allergic reaction: hives, itching; fever, stomach pain, muscle or joint pain; difficulty breathing; swelling of your face, lips, tongue, or throat.

A delayed allergic reaction to nafcillin can occur as few as 2 days to as many as 4 weeks after you use the medication.

What other drugs will affect nafcillin?

This list is not complete. Other drugs may affect nafcillin, including prescription and over-the-counter medicines, vitamins, and herbal products. Not all possible drug interactions are listed here.

Immediate allergic reactions usually occurred within 20 minutes of administration and ranged in severity from urticaria and pruritus to angioedema, laryngospasm, bronchospasm, hypotension, vascular collapse, and death; such immediate anaphylactic reactions were very rare and usually occurred after parenteral therapy but have occurred with oral therapy. An accelerated immediate allergic reaction has occurred between 20 minutes and 48 hours after administration and has included urticaria, pruritus, and fever; although laryngeal edema, laryngospasm, and hypotension occasionally occurred, fatality was uncommon.

Onset of pseudomembranous colitis symptoms have occurred during and after antibiotic therapy.

At least 3 cases of platelet dysfunction with prolonged bleeding times have been reported with this drug. All cases resolved after this drug was discontinued.

Elevated liver transaminases and cholestasis have been reported, especially with high doses.

Neurotoxic reactions (similar to those observed with penicillin G) have occurred with large IV or intraventricular doses, especially in patients with concurrent liver and renal dysfunction.