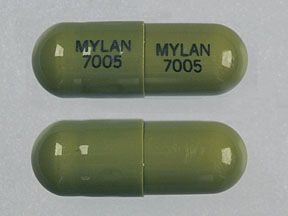 Loxapine is an antipsychotic medication. It affects the actions of chemicals in your brain.

Loxapine is used to treat schizophrenia.

Loxapine may also be used for purposes not listed in this medication guide.

You should not use loxapine if you have decreased alertness caused by taking certain medications or drinking alcohol.

Loxapine is not approved for use in psychotic conditions related to dementia. Loxapine may increase the risk of death in older adults with dementia-related conditions.

You should not use loxapine if you are allergic to loxapine or amoxapine, or if you have decreased alertness caused by taking certain medications or drinking alcohol.

Loxapine is not approved for use in psychotic conditions related to dementia. Loxapine may increase the risk of death in older adults with dementia-related conditions.

To make sure loxapine is safe for you, tell your doctor if you have:

Taking antipsychotic medication during the last 3 months of pregnancy may cause problems in the newborn, such as withdrawal symptoms, breathing problems, feeding problems, fussiness, tremors, and limp or stiff muscles. However, you may have withdrawal symptoms or other problems if you stop taking your medicine during pregnancy. If you become pregnant while taking loxapine, do not stop taking it without your doctor's advice.

It is not known whether loxapine passes into breast milk or if it could harm a nursing baby. Tell your doctor if you are breast-feeding a baby.

How should I take loxapine?

Follow all directions on your prescription label. Your doctor may occasionally change your dose. Do not take this medicine in larger or smaller amounts or for longer than recommended.

You may not start feeling better right away when you start taking loxapine. Call your doctor if your symptoms do not improve, or if they get worse while using loxapine.

What happens if I miss a dose of Loxapine succinate?

Overdose symptoms may include weak or shallow breathing, fainting, or seizure (convulsions).

What should I avoid while taking loxapine?

Loxapine may impair your thinking or reactions. Avoid driving or operating machinery until you know how loxapine will affect you. Avoid getting up too fast from a sitting or lying position, or you may feel dizzy. Dizziness or severe drowsiness can cause falls, fractures, or other injuries.

Avoid becoming overheated or dehydrated during exercise and in hot weather. Loxapine can decrease perspiration and you may be more prone to heat stroke.

High doses or long-term use of loxapine can cause a serious movement disorder that may not be reversible. Symptoms of this disorder include uncontrollable muscle movements of your lips, tongue, eyes, face, arms, or legs. The longer you take loxapine, the more likely you are to develop a serious movement disorder. The risk of this side effect is higher in women and older adults.

Stop using loxapine and call your doctor at once if you have:

Initial Dose: 10 mg orally twice a day
-Initial doses of up to 50 mg a day may be needed in severely disturbed patients
Titrate rapidly over the first 7 to 10 days until symptoms are effectively controlled
Maintenance Dose: 60 mg to 100 mg daily in divided doses, 2 to 4 times a day
Maximum dose: 250 mg/day

Comments:
-Daily dosage should be adjusted to the individual patient's needs based on severity of symptoms and previous antipsychotic drug response.
-Usual therapeutic and maintenance range is 60 to 100 mg daily; however, some patients may respond to lower, and others higher, doses.
-For maintenance therapy, 20 to 60 mg has been satisfactory for a majority of patients.

Use: For the treatment of schizophrenia

10 mg by oral inhalation once within a 24-hour period

Comments:
-To mitigate the risk of bronchospasm, all patients must undergo screening and examination prior to administration.
-This drug must be administered by a healthcare professional only in an enrolled healthcare facility.

Use: For the acute treatment of agitation associated with schizophrenia or bipolar I disorder

What other drugs will affect loxapine?

Taking loxapine with other drugs that make you sleepy or slow your breathing can cause dangerous or life-threatening side effects. Ask your doctor before taking a sleeping pill, narcotic pain medicine, prescription cough medicine, a muscle relaxer, or medicine for anxiety, depression, or seizures.

Other drugs may interact with loxapine, including prescription and over-the-counter medicines, vitamins, and herbal products. Tell each of your health care providers about all medicines you use now and any medicine you start or stop using.

Along with its needed effects, loxapine may cause some unwanted effects. Although not all of these side effects may occur, if they do occur they may need medical attention.

Check with your doctor immediately if any of the following side effects occur while taking loxapine:

Get emergency help immediately if any of the following symptoms of overdose occur while taking loxapine:

The most common adverse reactions reported with use of the inhaler were dysgeusia, sedation and throat irritation. Drowsiness, extrapyramidal reactions and akathisia have been reported frequently, especially during the first few days of oral therapy.

Sedation occurred in up to 12% of patients who used inhaled formulations.

Drowsiness has been frequently reported at the beginning of therapy or when the dosage is increased. It is generally mild and usually subsides with continued therapy. The incidence of sedation has been reported as less than certain aliphatic phenothiazines, and more than the piperazine phenothiazines.

A few cases of ECG changes similar to those seen with phenothiazines have been reported. It is not known if these were related to loxapine administration.

Uncommon (0.1% to 1%): Bronchospasm/shortness of breath

Use of the inhaler was shown to cause bronchospasm in clinical pulmonary safety trials as measured by FEV1 and respiratory signs and symptoms. Additionally, patients with asthma or other pulmonary diseases were shown to be at higher risk and the effect of FEV1 was greater following the second dose (administered 10 hours later).

Rare (less than 0.1%): Jaundice and/or hepatitis