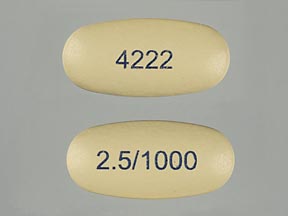 Prices and coupons of Kombiglyze xr

Kombiglyze XR contains a combination of metformin and saxagliptin. Metformin and saxagliptin are oral diabetes medicines that help control blood sugar levels. Metformin works by decreasing Glucose (sugar) production in the liver and decreasing absorption of Glucose by the intestines. Saxagliptin works by regulating the levels of insulin your body produces after eating. Kombiglyze XR is used together with diet and exercise to improve blood sugar control in adults with type 2 diabetes mellitus. Kombiglyze XR is not for treating type 1 diabetes. Learn more

What is Kombiglyze XR?

Metformin works by decreasing glucose (sugar) production in the liver and decreasing absorption of glucose by the intestines. Saxagliptin works by regulating the levels of insulin your body produces after eating.

Kombiglyze XR is used together with diet and exercise to improve blood sugar control in adults with type 2 diabetes mellitus.

Kombiglyze XR is not for treating type 1 diabetes.

You should not use Kombiglyze XR if you have severe kidney disease or diabetic ketoacidosis (call your doctor for treatment).

You should not use Kombiglyze XR if you are allergic to metformin or saxagliptin (Onglyza), or if you have severe kidney disease or diabetic ketoacidosis (call your doctor for treatment with insulin).

You may develop lactic acidosis, a dangerous build-up of lactic acid in your blood. This may be more likely if you have other medical conditions, a severe infection, chronic alcoholism, or if you are 65 or older. Ask your doctor about your risk.

If you need to have surgery or any type of x-ray or CT scan using a dye that is injected into your veins, you may need to temporarily stop taking Kombiglyze XR. Be sure your caregivers know ahead of time that you are using this medication.

Metformin may stimulate ovulation in a premenopausal woman and may increase the risk of unintended pregnancy. Talk to your doctor about your risk.

Kombiglyze XR is not approved for use by anyone younger than 18 years old.

How should I take Kombiglyze XR?

Take Kombiglyze XR exactly as prescribed by your doctor. Follow all directions on your prescription label and read all medication guides or instruction sheets. Use the medicine exactly as directed.

Your doctor may prescribe a glucagon injection kit in case you have severe hypoglycemia. Be sure your family or close friends know how to give you this injection in an emergency.

Also watch for signs of high blood sugar (hyperglycemia) such as increased thirst or urination.

Store Kombiglyze XR at room temperature away from moisture and heat.

Comments:
-Patients requiring saxagliptin 2.5 mg per day AND are either metformin-naive or require a dose of metformin greater than 1000 mg per day should use the individual components.
-Following a switch from metformin immediate-release to metformin extended release, glycemic control should be closely monitored and dosage adjustments made according.
-When used in combination with a sulfonylurea or insulin, a lower dose of the sulfonylurea or insulin may be considered to reduce the risk of hypoglycemia.
-Note: There are saxagliptin-metformin combination products available internationally that contain immediate-release metformin; saxagliptin-metformin products containing immediate-release metformin should be dosed twice a day.

Use: An adjunct to diet and exercise to improve glycemic control in adults with type 2 diabetes when treatment with both saxagliptin and metformin is appropriate.

Take the medicine (with food) as soon as you can, but skip the missed dose if it is almost time for your next dose. Do not take two doses at one time.

What should I avoid while taking Kombiglyze XR?

Avoid drinking alcohol. It lowers blood sugar and may increase your risk of lactic acidosis.

Get emergency medical help if you have signs of an allergic reaction to Kombiglyze XR: hives, itching, peeling skin; difficult breathing; swelling of your face, lips, tongue, or throat.

Stop taking this medicine and call your doctor right away if you have symptoms of pancreatitis: severe pain in your upper stomach spreading to your back, nausea and vomiting, loss of appetite, or fast heartbeats.

Some people using metformin develop lactic acidosis, which can be fatal. Get emergency medical help if you have even mild symptoms such as:

Call your doctor at once if you have any of these serious side effects:

Common Kombiglyze XR side effects may include:

What other drugs will affect Kombiglyze XR?

Many drugs can interact with metformin and saxagliptin, making this medicine less effective or increasing your risk of lactic acidosis.

This list is not complete. Other drugs may interact with metformin and saxagliptin, including prescription and over-the-counter medicines, vitamins, and herbal products. Not all possible drug interactions are listed here.

Remember, keep this and all other medicines out of the reach of children, never share your medicines with others, and use Kombiglyze XR only for the indication prescribed.

Note: This document contains side effect information about metformin / saxagliptin. Some of the dosage forms listed on this page may not apply to the brand name Kombiglyze XR.

More frequent side effects include: decreased vitamin b12 serum concentrate and hypoglycemia. See below for a comprehensive list of adverse effects.

Along with its needed effects, metformin/saxagliptin may cause some unwanted effects. Although not all of these side effects may occur, if they do occur they may need medical attention.

Check with your doctor immediately if any of the following side effects occur while taking metformin / saxagliptin:

In metformin-treated patients, lactic acidosis has been reported in approximately 0.03 cases per 1000 patient-years with approximately half these cases resulting in fatalities. In more than 20,000 patient-years exposure in clinical trials, there were no cases of lactic acidosis. Reported cases have occurred primarily in patients with significant renal insufficiency, often in the setting of multiple concomitant medical/surgical problems and multiple concomitant medications.

Very common (10% or more): Hypoglycemia (in combination with insulin or sulfonylurea)

Common (1% to 10%): Hypersensitivity-related events such as urticaria and facial edema

In a 5-study pooled analysis including patients receiving saxagliptin 2.5 mg, saxagliptin 5 mg, and placebo, hypersensitivity-related events were reported in 1.5%, 1.5%, and 0.4%, respectively. None of the events required hospitalization or were reported as life-threatening. One saxagliptin-treated patient discontinued treatment due to generalized urticaria and facial edema. Postmarketing, there have been serious hypersensitivity reactions including anaphylaxis, angioedema, and exfoliative skin conditions reported.

Frequently during treatment initiation of metformin gastrointestinal effects have occurred and these appear to resolve spontaneously in most cases. A slow increase in dose and dividing doses and taking during or after meals may improve gastrointestinal tolerability. In metformin extended-release monotherapy trials, diarrhea and nausea/vomiting were reported in 9.6% and 6.5% of patients compared with 2.6% and 1.5% of placebo patients, respectively.

Acute pancreatitis has been reported during postmarketing use of saxagliptin. In the SAVOR (Saxagliptin Assessment of Vascular Outcomes Recorded in Patients with Diabetes Mellitus-Thrombolysis in Myocardial infarction) Trial, the incidence of adjudicated pancreatitis events in the intention to treat population was 0.3% in both the saxagliptin treated patients as well as those receiving placebo.

A dose-related mean decrease in absolute lymphocyte count was observed during clinical trials. The proportion of patients with lymphocyte counts of 750 cells/microL or less was 0.5%, 1.5%, 1.4%, and 0.4% in patients receiving saxagliptin 2.5 mg, 5 mg, 10 mg (not an approved dosage), and placebo, respectively. In most patients, recurrence was not observed with repeated exposure, although some discontinuations were associated with recurrent decrease upon rechallenge. During clinical trials, these decreases in lymphocyte count were not associated with clinically relevant adverse reactions, but whether these decreases may become a concern is unknown. When clinically indicated, such as in settings of unusual or prolonged infection, lymphocyte count should be measured. The effect of saxagliptin on lymphocyte counts in patients with lymphocyte abnormalities (e.g., HIV) is unknown.

Rare (less than 0.1%): Megaloblastic anemia due to reduced vitamin B12 absorption

In the SAVOR (Saxagliptin Assessment of Vascular Outcomes Recorded in Patients with Diabetes Mellitus-Thrombolysis in Myocardial infarction) Trial, hospitalization for heart failure (secondary composite endpoint) occurred at a greater rate in the saxagliptin group (3.5%) compared with the placebo group (2.8%), however clinically relevant factors predictive of increased relative risk with saxagliptin could not be definitively identified. Known risk factors for heart failure such as baseline history of heart failure or impaired renal function did confer increased risk, irrespective of treatment assignment. The primary composite endpoints for all-cause mortality showed saxagliptin did not increase the cardiovascular (CV) risk(CV death, nonfatal myocardial infarction, or nonfatal ischemic stroke) in patients with type 2 diabetes mellitus compared to placebo when added to current background therapy.

Common (1% to 10%): Hospitalization for heart failure, hypertension, peripheral edema (in combination with a thiazolidinedione)

Among 4959 saxagliptin-treated patients in clinical trials, 6 cases of tuberculosis have been received; no reports of tuberculosis have been received among the 2868 comparator-treated patients. Causality has not been established and there are too few cases to date to determine any relation to saxagliptin use. None of the cases occurred in the U.S. or in Western Europe; 1 case occurred in Canada in a patient originally from Indonesia who had recently visited Indonesia.

One case of a potential opportunistic infection occurred in a saxagliptin-treated patient. Approximately 600 days after starting saxagliptin, this patient developed fatal salmonella sepsis.

Between October 2006 and December 2013, thirty-three cases of severe arthralgia have been reported to the FDA Adverse Event Reporting System Database. Each case involved the use of 1 or more dipeptidyl peptidase-4 (DPP-4) inhibitor. In all cases, substantial reduction in prior activity level was reported, 10 patients were hospitalized due to disabling joint pain. In 22 cases, symptoms appeared within 1 month of starting therapy, in 23 cases symptoms resolved less than 1 month after discontinuation. A positive rechallenge was reported in 8 cases, with 6 cases involving use of a different DPP-4 inhibitor. Sitagliptin had the greatest number of cases reported (n=28) followed by saxagliptin (n=5), linagliptin (n=2), alogliptin (n=1), and vildagliptin (n=2).