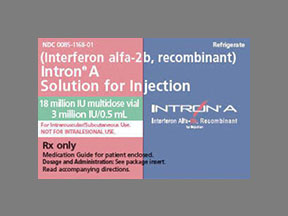 Intron A is made from human proteins. Interferons help your body's immune system respond to bacteria, viruses, cancer, or other invading substances. Intron A is used to treat hairy cell leukemia, malignant melanoma, follicular lymphoma, Kaposi's sarcoma caused by AIDS, and certain types of genital warts. This medicine is also used to treat chronic hepatitis B or C in adults, and to treat chronic hepatitis B in children who are at least 1 year old. Intron A may also be used for purposes not listed in this medication guide. Learn more

Buy Intron a Online and Intron a Delivery

What is Intron A?

Intron A is made from human proteins. Interferons help your body's immune system respond to bacteria, viruses, cancer, or other invading substances.

Intron A may also be used for purposes not listed in this medication guide.

You should not use Intron A if you have autoimmune hepatitis, or severe liver problems from causes other than hepatitis B or C.

Do not use Intron A together with ribavirin if you are pregnant, or if you are a man and your sexual partner is pregnant. Prevent pregnancy while using Intron A, and for at least 6 months after you stop using it.

Intron A can cause life-threatening infections, autoimmune disorders, serious mood or behavior problems, or a stroke.

Call your doctor at once if you have: unusual changes in mood or behavior, chest pain, trouble breathing, sudden numbness or weakness, or signs of infection (fever, chills, cough with mucus, or burning when you urinate).

Before Taking Intron a

You should not use Intron A if you are allergic to it, or if you have:

You should not use the combination of interferon alfa-2b and ribavirin if you have:

Tell your doctor if you have ever had

Intron A can harm an unborn baby or cause a miscarriage. Do not use this medicine with ribavirin (Rebetol) if you are pregnant. The combination of these medicines can cause birth defects. Use 2 forms of effective birth control to prevent pregnancy while you are using this drug combination and for at least 6 months after your last dose.

If a man fathers a child while using Intron A and ribavirin, the baby may have birth defects. Use a condom to prevent pregnancy during your treatment. Continue using condoms for at least 6 months after you stop using this drug combination.

Tell your doctor right away if a pregnancy occurs while either the mother or the father is using Intron A and ribavirin.

The powder form of interferon alfa-2b is made from human plasma (part of the blood) which may contain viruses and other infectious agents. Donated plasma is tested and treated to reduce the risk of it containing infectious agents, but there is still a small possibility it could transmit disease. Talk with your doctor about the risks and benefits of using this medication.

How is Intron A given?

Intron A is injected into a muscle, under the skin, as an infusion into a vein, or directly into a genital wart. A healthcare provider will give your first dose and may teach you how to properly use the medication by yourself.

Your dose needs may change if you switch to a different brand, strength, or form of Intron A. Avoid medication errors by using only the form and strength your doctor prescribes.

Read and carefully follow any Instructions for Use provided with your medicine. Do not use Intron A if you don't understand all instructions for proper use. Ask your doctor or pharmacist if you have questions.

Intron A powder must be mixed with a liquid (diluent) before using it. When using injections by yourself, be sure you understand how to properly mix and store the medicine.

Prepare your injection only when you are ready to give it. Do not use if the medicine looks cloudy, has changed colors, or has particles in it. Call your pharmacist for new medicine.

Intron A can increase your risk of bleeding or infection by changing the way your immune system works. You will need frequent medical tests. Your heart, lung, and liver function may also need to be checked.

Each mixture or single-use vial (bottle) of this medicine is for one use only. Throw it away after one use, even if there is still medicine left inside. Throw away any leftover medicine in a multi-dose vial 30 days after the first use.

What happens if I miss a dose of Intron a?

Use the medicine as soon as you remember, and then go back to your regular injection schedule. Do not use two doses at one time.

If several days pass after you miss a dose, call your doctor for instructions.

What should I avoid while using Intron A?

Using Intron A will not prevent your disease from spreading. Follow your doctor's instructions about how to prevent passing the disease to another person.

Avoid drinking alcohol. It may increase your risk of liver damage.

Intron A side effects

Get emergency medical help if you have signs of an allergic reaction: hives, skin rash with blistering and peeling; anxiety, chest pain, difficult breathing; swelling of your face, lips, tongue, or throat.

Your cancer treatments may be delayed or permanently discontinued if you have certain side effects.

Intron A with ribavirin can affect growth in children. Talk with your doctor if you think your child is not growing at a normal rate while using this medicine.

What other drugs will affect Intron A?

This list is not complete. Other drugs may affect Intron A, including prescription and over-the-counter medicines, vitamins, and herbal products. Not all possible drug interactions are listed here.

Intron A Side Effects

Note: This document contains side effect information about interferon alfa-2b. Some of the dosage forms listed on this page may not apply to the brand name Intron A.

Common side effects of Intron A include: hemolytic anemia, abdominal pain, cough, depression, dyspnea, fever, flu-like symptoms, nausea, thrombocytopenia, and vomiting. See below for a comprehensive list of adverse effects.

Alpha interferons, including interferon alfa-2b, cause or aggravate fatal or life-threatening neuropsychiatric, autoimmune, ischemic, and infectious disorders. Patients should be monitored closely with periodic clinical and laboratory evaluations. Patients with persistently severe or worsening signs or symptoms of these conditions should be withdrawn from therapy. In many but not all cases these disorders resolve after stopping interferon alfa-2b therapy.

Along with its needed effects, interferon alfa-2b (the active ingredient contained in Intron A) may cause some unwanted effects. Although not all of these side effects may occur, if they do occur they may need medical attention.

Check with your doctor immediately if any of the following side effects occur while taking interferon alfa-2b:

Clinical trials were conducted for various indications using a wide range of doses (from 6 million international units/m2/week in hairy cell leukemia up to 100 million international units/m2/week in melanoma). Most side effects reported during clinical trials were mild to moderate in severity and manageable. Some side effects were transient and most diminished with continued therapy. Influenza-like symptoms (mainly fever, headache, rigors/chills, myalgia, malaise, and fatigue) were reported most often; these side effects were reversible within 72 hours after interrupting or stopping therapy. Side effects were dose-related. In general, more severe toxicities were observed at higher doses; hematologic, hepatic, cardiovascular, and neurologic toxicities were more common with higher doses.

The manufacturer product information for ribavirin should be consulted, if applicable.

Myositis has also been reported during postmarketing experience.

Pancreatitis has also been reported during postmarketing experience.

Worsening liver disease, including jaundice, hepatic encephalopathy, hepatic failure, and death have been reported after use of this drug in patients with decompensated liver disease, autoimmune hepatitis, or history of autoimmune disease, and in immunosuppressed transplant recipients.

Frontal subcortical dysfunction and choreic movements of the limbs appeared in a 68-year-old woman almost 2 years after the start of interferon alfa-2b (the active ingredient contained in Intron A) (3 x 10[6] units/day) for chronic myeloid leukemia. She had no history of psychiatric disorders and no hereditary neurodegenerative disease with long-term recombinant interferon therapy. Symptoms of personality changes, short memory loss, and choreic movements progressively worsened over a 4 month period until she became bedridden. One month after this drug was discontinued, patient's cognitive performance had improved and choreic movements had disappeared. Clinical examination of her cognitive performances at six and 12 months later were normal.

Peripheral neuropathy and hearing loss have also been reported during postmarketing experience.

Psychosis (including hallucinations) has also been reported during postmarketing experience.

Rare (0.01% to 0.1%): Aggressive behavior (sometimes directed against others), psychosis (including hallucinations)

Case reports of aseptic necrosis of the skin and ulceration have been described in patients with Kaposi's sarcoma associated with HIV infection treated with this drug.

Severe asthma developed in 2 patients as soon as 8 weeks after the start of this drug in patients diagnosed with chronic hepatitis C and mild asthma.

Pulmonary fibrosis has also been reported during postmarketing experience.

Injection site necrosis has also been reported during postmarketing experience.

Serous retinal detachment has also been reported during postmarketing experience.

Cardiovascular side effects (especially arrhythmia) appeared to be associated with preexisting cardiovascular disease and prior use of cardiotoxic agents.

Sarcoidosis and exacerbation of sarcoidosis have also been reported during postmarketing experience.

Latest News for Intron a