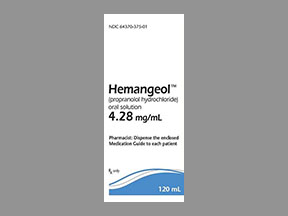 Hemangeol is a beta-blocker. Beta-blockers affect the heart and circulation (blood flow through arteries and veins). Hemangeol is used to treat tremors, angina (chest pain), hypertension (high blood pressure), heart rhythm disorders, and other heart or circulatory conditions. It is also used to treat or prevent heart attack, and to reduce the severity and frequency of migraine headaches. Hemangeol (Hemangeol oral liquid 4.28 milligrams) is given to infants who are at least 5 weeks old to treat a genetic condition called infantile hemangiomas. Hemangiomas are caused by blood vessels grouping together in an abnormal way. These blood vessels form benign (non-cancerous) growths that can develop into ulcers or red marks on the skin. Hemangiomas can also cause more serious complications inside the body (in the liver, brain, or digestive system). Learn more

Hemangeol is a beta-blocker. Beta-blockers affect the heart and circulation (blood flow through arteries and veins).

Hemangeol is used to treat tremors, angina (chest pain), hypertension (high blood pressure), heart rhythm disorders, and other heart or circulatory conditions. It is also used to treat or prevent heart attack, and to reduce the severity and frequency of migraine headaches.

Hemangeol (Hemangeol oral liquid 4.28 milligrams) is given to infants who are at least 5 weeks old to treat a genetic condition called infantile hemangiomas. Hemangiomas are caused by blood vessels grouping together in an abnormal way. These blood vessels form benign (non-cancerous) growths that can develop into ulcers or red marks on the skin. Hemangiomas can also cause more serious complications inside the body (in the liver, brain, or digestive system).

Hemangeol may also be used for purposes not listed in this medication guide.

You should not use Hemangeol if you have asthma, very slow heart beats, or a serious heart condition such as "sick sinus syndrome" or "AV block" (unless you have a pacemaker).

Babies who weigh less than 4.5 pounds should not be given Hemangeol oral liquid.

You should not use Hemangeol if you are allergic to it, or if you have:

Babies who weigh less than 4.5 pounds should not be given Hemangeol oral liquid.

To make sure Hemangeol is safe for you, tell your doctor if you have:

It is not known whether Hemangeol will harm an unborn baby. Tell your doctor if you are pregnant or plan to become pregnant while using this medicine.

Propranolol can pass into breast milk and may harm a nursing baby. Tell your doctor if you are breast-feeding a baby.

How should I take Hemangeol?

Follow all directions on your prescription label. Your doctor may occasionally change your dose to make sure you get the best results. Do not take Hemangeol in larger or smaller amounts or for longer than recommended.

Adults may take Hemangeol with or without food, but take it the same way each time.

Take this medicine at the same time each day.

Do not crush, chew, break, or open an extended-release capsule. Swallow it whole.

Hemangeol must be given to an infant during or just after a feeding. Doses should be spaced at least 9 hours apart. Make sure your child gets fed regularly while taking this medicine. Tell your doctor when the child has any changes in weight. Hemangeol doses are based on weight in children, and any changes may affect your child's dose.

Call your doctor if a child taking Hemangeol is sick with vomiting, or has any loss of appetite.

Measure liquid medicine with the dosing syringe provided, or with a special dose-measuring spoon or medicine cup. If you do not have a dose-measuring device, ask your pharmacist for one.

Do not shake Hemangeol liquid.

Your blood pressure will need to be checked often.

If you need surgery, tell the surgeon ahead of time that you are using Hemangeol. You may need to stop using the medicine for a short time.

Do not skip doses or stop using Hemangeol suddenly. Stopping suddenly may make your condition worse. Follow your doctor's instructions about tapering your dose.

This medicine can cause unusual results with certain medical tests. Tell any doctor who treats you that you are using Hemangeol.

Hemangeol is only part of a complete program of treatment for hypertension that may also include diet, exercise, and weight control. Follow your diet, medication, and exercise routines very closely if you are being treated for hypertension.

Store at room temperature away from moisture and heat. Do not allow liquid medicine to freeze. Throw away any unused Hemangeol 2 months after you first opened the bottle.

For extended-release Hemangeol (Inderal LA, InnoPran XL and others): Take the missed dose as soon as you remember. Skip the missed dose if your next dose is less than 8 hours away.

Do not take extra medicine to make up the missed dose.

Overdose symptoms may include slow or uneven heartbeats, dizziness, weakness, or fainting.

What should I avoid while taking Hemangeol?

Avoid drinking alcohol. It may increase your blood levels of propranolol.

What other drugs will affect Hemangeol?

Tell your doctor about all medicines you use, and those you start or stop using during your treatment with Hemangeol, especially:

This list is not complete. Other drugs may interact with propranolol, including prescription and over-the-counter medicines, vitamins, and herbal products. Not all possible interactions are listed in this medication guide.

Note: This document contains side effect information about propranolol. Some of the dosage forms listed on this page may not apply to the brand name Hemangeol.

Along with its needed effects, propranolol (the active ingredient contained in Hemangeol) may cause some unwanted effects. Although not all of these side effects may occur, if they do occur they may need medical attention.

Check with your doctor immediately if any of the following side effects occur while taking propranolol:

Use of a nonselective beta-blocker like propranolol (the active ingredient contained in Hemangeol) may at least blunt cardiac output in some patients, especially those with preexisting left ventricular systolic dysfunction and during exertion. Data have shown that cardiac conditioning can delay or attenuate this side effect of propranolol.

Abrupt cessation of propranolol therapy may result in hypertension, myocardial infarction, and angina pectoris in some patients.

Paradoxical hypertension may occur in patients with pheochromocytoma, unless alpha-adrenergic blockade is already instituted.

Rare (less than 0.1%): Exacerbation of claudication, postural hypotension (which may be associated with syncope)

Rare (less than 0.1%): Dizziness, paresthesia (especially of the hands)

Rare (less than 0.1%): Dyspnea, worsening of reactive airways diseases, bronchospasm in patients with bronchial asthma or a history of asthmatic complaints (sometimes fatal)

Limited data have shown a mean fall in maximal midexpiratory flow rate (MMFR) during propranolol therapy relative to placebo in nine of ten patients whose lung function was assessed. Interestingly, the fall was not related to smoking or to atopic status, suggestive of resting beta-adrenergic bronchodilator activity in nonasthmatic subjects.

Non-selective beta-blockers, such as propranolol, are used with caution in patients with asthma and chronic obstructive pulmonary disease due to inhibition of bronchodilation.

Beta-blockers, such as propranolol (the active ingredient contained in Hemangeol) are used with caution in patients with diabetes due to masking of the catecholamine response to hypoglycemia. Propranolol may also mask the signs of hyperthyroidism by the same mechanism.

A 72-year-old retired college professor with no history of affective disorders developed progressive sadness, tearfulness, hopelessness, decreased energy, social withdrawal, anhedonia, insomnia, and decreased memory and concentration within two weeks after beginning propranolol monotherapy for hypertension. The signs and symptoms of depression resolved upon substitution with a thiazide diuretic. Interestingly, the patient later was treated for recurrent depression while not receiving propranolol.

Rare cases of psychoses associated with propranolol have been reported.

Propranolol can enhance the immune system by causing an increase in the number of circulating T cells, increased interleukin-2 (IL-2) secretion, increased expression of IL-2 receptors, and increased lymphocyte production in response to the T cell mitogen Con A. Interestingly, NK (natural killer) cell activity may be decreased during propranolol therapy, although the number of circulating NK cells may remain unchanged. These results are consistent with previous data showing decreased immunologic function during periods of elevated sympathetic activity, such as congestive heart failure, uremia, or life-threatening events.

The mechanism by which propranolol induces weight gain is unknown. Some investigators have reported a 4% to 9% reduction in total energy expenditure and a 25% reduction in thermogenic response to food during beta-blocker treatment.