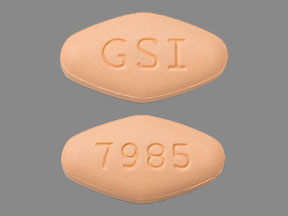 Harvoni is used to treat chronic hepatitis C in adults and children who are at least 12 years old or who weigh at least 77 pounds (35 kilograms). Ledipasvir and sofosbuvir is sometimes given in combination with another medicine called ribavirin.

Harvoni treats specific genotypes of hepatitis C, and only in certain people. Use only the medications prescribed for you. Do not share your medicine with other people.

Harvoni is sometimes used in people who also have HIV. This medicine is not a treatment for HIV or AIDS.

You should not use Harvoni if you are also taking sofosbuvir tablets (Sovaldi).

If you've ever had hepatitis B, using Harvoni can cause this virus to become active or get worse. Tell your doctor if you don't feel well and you have right-sided upper stomach pain, vomiting, loss of appetite, or yellowing of your skin or eyes.

Harvoni is sometimes used in combination with other medication. Read the medication guide or patient instructions provided with each medication in your combination therapy. Do not change your doses or medication schedule without your doctor's advice.

You should not use Harvoni if you are allergic to ledipasvir or sofosbuvir.

If you take Harvoni with ribavirin: There may be other reasons you should not take this combination treatment. Tell your doctor about all your medical conditions.

To make sure Harvoni is safe for you, tell your doctor if you have ever had:

Both men and women using Harvoni with ribavirin should use at least 2 effective forms of birth control to prevent pregnancy. Ribavirin can cause birth defects or death in an unborn baby if the mother or father is using this medicine.

Keep using 2 forms of birth control while using ribavirin, and for at least 6 months after your last dose. Tell your doctor right away if a pregnancy occurs while either the mother or the father is using ribavirin.

It may not be safe to breastfeed while using this medicine. Ask your doctor about any risk.

Harvoni is not approved for use by anyone younger than 3 years old.

How should I take Harvoni?

Take Harvoni exactly as prescribed by your doctor. Follow all directions on your prescription label and read all medication guides or instruction sheets.

Your doctor will perform blood tests to make sure you do not have conditions that would prevent you from safely using Harvoni.

You may take Harvoni with or without food. Take the medicine at the same time each day.

Do not chew the oral pellets.

Harvoni doses are based on weight (especially in children and teenagers). Your dose needs may change if you gain or lose weight.

You will need frequent blood tests to check your liver function.

If you've ever had hepatitis B, using Harvoni can cause this virus to become active or get worse. You may need frequent liver function tests while using this medicine and for several months after you stop.

Use all medications as directed and read all medication guides you receive. Do not change your dose or dosing schedule without your doctor's advice. Every person with chronic hepatitis C should remain under the care of a doctor.

Store this medicine in the original container at room temperature away from moisture and heat. Do not open the packet of oral pellets until you are ready to use the medicine.

You should not stop using Harvoni suddenly. Stopping suddenly could make your condition harder to treat with hepatitis C antiviral medicine.

What should I avoid while taking Harvoni?

If you also take an antacid, do not take it for at least 4 hours after you have taken your dose of Harvoni.

Using this medicine will not prevent your disease from spreading. Do not have unprotected sex or share razors or toothbrushes. Talk with your doctor about safe ways to prevent hepatitis C transmission during sex. Sharing drug or medicine needles is never safe, even for a healthy person.

Get emergency medical help if you have signs of an allergic reaction to Harvoni: hives; difficult breathing; swelling of your face, lips, tongue, or throat.

Call your doctor at once if you have new or worsening symptoms such as:

If you take Harvoni and you also take a heart rhythm medicine called amiodarone: This combination of medicines can cause dangerous side effects on your heart. Get medical help right away if you take these medicines and you have:

Common Harvoni side effects may include:

What other drugs will affect Harvoni?

When you start or stop taking Harvoni, your doctor may need to adjust the doses of any other medicines you take on a regular basis.

Many drugs can interact with ledipasvir and sofosbuvir. This includes prescription and over-the-counter medicines, vitamins, and herbal products. Not all possible interactions are listed here. Tell your doctor about all your current medicines and any medicine you start or stop using.

Remember, keep this and all other medicines out of the reach of children, never share your medicines with others, and use Harvoni only for the indication prescribed.

Note: This document contains side effect information about ledipasvir / sofosbuvir. Some of the dosage forms listed on this page may not apply to the brand name Harvoni.

Test all patients for evidence of current or prior hepatitis B virus (HBV) infection before initiating treatment with ledipasvir / sofosbuvir. HBV reactivation has been reported in HCV/HBV coinfected patients who were undergoing or had completed treatment with HCV direct acting antivirals and were not receiving HBV antiviral therapy. Some cases have resulted in fulminant hepatitis, hepatic failure, and death. Monitor HCV/HBV coinfected patients for hepatitis flare or HBV reactivation during HCV treatment and post-treatment follow-up. Initiate appropriate patient management for HBV infection as clinically indicated.

Along with its needed effects, ledipasvir / sofosbuvir may cause some unwanted effects. Although not all of these side effects may occur, if they do occur they may need medical attention.

Check with your doctor immediately if any of the following side effects occur while taking ledipasvir / sofosbuvir:

Among 174 liver transplant recipients with compensated liver disease using this drug with ribavirin for 12 weeks, 1% permanently discontinued this drug due to a side effect.

Among 162 patients with decompensated liver disease (pretransplant or posttransplant) using this drug with ribavirin for 12 weeks, 4% died, 2% had a liver transplantation, and less than 1% had a liver transplantation and died during therapy or within 30 days after stopping therapy. Due to the advanced liver disease in these patients (who had increased risk of disease progression leading to liver failure and death), the contribution of drug effect to outcomes could not be reliably assessed. This drug was permanently discontinued due to a side effect in 2% of patients.

If this drug is used with ribavirin, the manufacturer product information for ribavirin should be consulted for associated side effects.

Decreased hemoglobin (less than 10 g/dL: up to 39%; less than 8.5 g/dL: up to 13%) has been reported in liver transplant recipients and/or patients with decompensated liver disease using this drug with ribavirin for 12 or 24 weeks. Ribavirin was permanently discontinued in up to 19% of patients. Immunosuppressive agents were modified in up to 10% of liver transplant recipients (modified dose due to improved organ function in at least 7%).

Increased lipase (greater than 3 times the upper limit of normal [3 x ULN]) was reported in less than 1%, 2%, and 3% of patients using this drug for 8, 12, and 24 weeks, respectively. Increased lipase (greater than 3 x ULN) was reported in 1%, 3%, and 9% of patients with compensated cirrhosis using placebo, this drug plus ribavirin for 12 weeks, and this drug for 24 weeks, respectively. Lipase elevation was transient and asymptomatic.

Severe bradycardia and heart block have been reported when this drug was used with concomitant amiodarone and/or other agents that lower heart rate.

Serious symptomatic bradycardia has been reported in patients taking amiodarone who started therapy with this drug.

Creatine kinase was not evaluated in some phase 3 clinical trials for this drug, but was evaluated in at least 1 trial. Isolated, asymptomatic creatine kinase elevations (at least 10 x ULN) were reported in 1% of patients using this drug for 12 weeks; such elevations were previously reported in patients using sofosbuvir with ribavirin or peginterferon/ribavirin in other clinical trials.