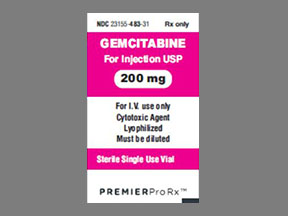 Gemcitabine is used to treat cancers of the pancreas, lung, ovary, and breast. Gemcitabine is sometimes given with other cancer medicines, or when other cancer treatments did not work or have stopped working. Gemcitabine may also be used for purposes not listed in this medication guide. Gemcitabine can increase your risk of bleeding or infection. Call your doctor if you have unusual bruising or bleeding, or new signs of infection (fever, chills, tiredness, bruising or bleeding, pale skin). Gemcitabine can also affect your liver, kidneys, or lungs. Tell your doctor if you have stomach pain, dark urine, yellow skin or eyes, little or no urinating, swelling, rapid weight gain, severe shortness of breath, wheezing, or cough with foamy mucus. Learn more

Gemcitabine is used to treat cancers of the pancreas, lung, ovary, and breast.

Gemcitabine is sometimes given with other cancer medicines, or when other cancer treatments did not work or have stopped working.

Gemcitabine may also be used for purposes not listed in this medication guide.

Gemcitabine can also affect your liver, kidneys, or lungs. Tell your doctor if you have stomach pain, dark urine, yellow skin or eyes, little or no urinating, swelling, rapid weight gain, severe shortness of breath, wheezing, or cough with foamy mucus.

If you receive gemcitabine during or after radiation treatment, tell your doctor right away if you have severe skin redness, swelling, oozing, or peeling.

You should not use gemcitabine if you are allergic to it.

Both men and women using gemcitabine should use effective birth control to prevent pregnancy. Gemcitabine can harm an unborn baby if the mother or father is using this medicine.

This medicine may affect fertility (ability to have children) in men. However, it is important to use birth control to prevent pregnancy because gemcitabine can harm an unborn baby.

You should not breastfeed while you are using gemcitabine, and for at least 1 week after your last dose.

How is gemcitabine used?

Gemcitabine is given as an infusion into a vein. A healthcare provider will give you this injection.

Tell your caregivers if you feel any burning, pain, or swelling around the IV needle when gemcitabine is injected.

If any of this medicine accidentally gets on your skin, wash the area thoroughly with soap and warm water.

Gemcitabine can increase your risk of bleeding or infection. You will need frequent medical tests.

What happens if I miss a dose of Gemcitabine hcl?

Call your doctor for instructions if you miss an appointment for your gemcitabine injection.

What should I avoid while using gemcitabine?

Avoid being near people who are sick or have infections. Avoid activities that may increase your risk of bleeding or injury.

Do not receive a "live" vaccine while using gemcitabine, and avoid coming into contact with anyone who has recently received a live vaccine. There is a chance that the virus could be passed on to you. Live vaccines include measles, mumps, rubella (MMR), polio, rotavirus, typhoid, yellow fever, varicella (chickenpox), zoster (shingles), and nasal flu (influenza) vaccine.

gemcitabine can pass into body fluids (urine, feces, vomit). For at least 48 hours after you receive a dose, avoid allowing your body fluids to come into contact with your hands or other surfaces. Caregivers should wear rubber gloves while cleaning up a patient's body fluids, handling contaminated trash or laundry or changing diapers. Wash hands before and after removing gloves. Wash soiled clothing and linens separately from other laundry.

Your cancer treatments may be delayed or permanently discontinued if you have certain side effects.

What other drugs will affect gemcitabine?

Other drugs may affect gemcitabine, including prescription and over-the-counter medicines, vitamins, and herbal products. Tell your doctor about all your current medicines and any medicine you start or stop using.

More frequently reported side effects include: signs and symptoms of injection site. See below for a comprehensive list of adverse effects.

Along with its needed effects, gemcitabine may cause some unwanted effects. Although not all of these side effects may occur, if they do occur they may need medical attention.

Check with your doctor or nurse immediately if any of the following side effects occur while taking gemcitabine:

Myelosuppression is the major dose-limiting factor associated with gemcitabine therapy.

Dosage adjustments for hematologic toxicity are frequently necessary. Less than 1% of patients have had to discontinue therapy for either anemia, leukopenia, or thrombocytopenia. Grade 3/4 thrombocytopenia was more common in the elderly, especially older women.

The risk for thrombotic thrombocytopenic purpura increases as the cumulative dose of gemcitabine approaches 20,000 mg/m2.

If the patient is not vomiting due to their disease state, nausea can generally be prevented by administration of prochlorperazine or low-dose oral serotonin antagonists and glucocorticoid therapy. One study of 790 patients found the rate of WHO grade 3 nausea and vomiting at a frequency of 22% in patients under 65 years of age, and 12% in patients 65 years of age or older.

No evidence of increased hepatic toxicity has been reported with longer duration or greater total cumulative dose.

Renal failure may not be reversible, even upon discontinuation of therapy.

The flu-like symptoms usually take place a few hours after drug administration. The symptoms are usually self-limiting and recovery is generally within 24 to 48 hours. Less than 1% of patients discontinued use due to flu-like symptoms. Some patients get relief from nonsteroidal anti-inflammatory drugs or acetaminophen.

Out of the five reported cases of distal ischemic changes, four of those case related to combination chemotherapy with cisplatin and gemcitabine, while one case was of gemcitabine as a single agent in first-line therapy.

Rash was generally a macular or finely granular maculopapular pruritic eruption, mild to moderate in severity, involving the trunk and extremities. Alopecia is usually minimal.

Some of the dyspnea reported may have been due to underlying disease. Forty percent of the study population consisted of lung cancer patients, while some of the other study patients had pulmonary manifestations of other malignancies.

Different patterns of lung injury may be related to gemcitabine. A rapid response following the administration of corticosteroids would mean the respiratory problem was probably due to a hypersensitivity reaction.

Less than 1% of the paresthesias have been severe.