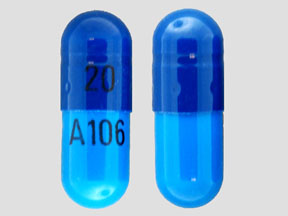 Fluoxetine is a selective serotonin reuptake inhibitor (SSRI) antidepressant. Fluoxetine affects chemicals in the brain that may be unbalanced in people with depression, panic, anxiety, or obsessive-compulsive symptoms. Fluoxetine is used to treat major depressive disorder, bulimia nervosa (an eating disorder), obsessive-compulsive disorder, panic disorder, and premenstrual dysphoric disorder (PMDD). Fluoxetine is sometimes used together with another medication called Olanzapine (Zyprexa) to treat manic depression caused by bipolar disorder. This combination is also used to treat depression after at least 2 other medications have been tried without successful treatment of symptoms. Learn more

Antidepressants can increase the risk of suicidal thinking and behavior in children, adolescents, and young adults with major depressive disorder. Closely monitor patients of all ages for clinical worsening and emergence of suicidal thoughts and behaviors. When using fluoxetine hydrochloride and olanzapine in combination, also refer to the Boxed Warning section of the package insert for fluoxetine hydrochloride/olanzapine.

Antidepressants can increase the risk of suicidal thinking and behavior in children, adolescents, and young adults with major depressive disorder (MDD). Closely monitor patients of all ages for clinical worsening and emergence of suicidal thoughts and behaviors. Fluoxetine oral solution is approved for use in pediatric patients with MDD and obsessive compulsive disorder.

Antidepressants can increase the risk of suicidal thinking and behavior in children, adolescents, and young adults with major depressive disorder. Closely monitor patients of all ages for clinical worsening and emergence of suicidal thoughts and behaviors. Fluoxetine hydrochloride oral tablets are not approved for use in pediatric patients.

Along with its needed effects, fluoxetine may cause some unwanted effects. Although not all of these side effects may occur, if they do occur they may need medical attention.

Check with your doctor immediately if any of the following side effects occur while taking fluoxetine:

The most commonly reported side effects included insomnia, asthenia, and headache.

Potentially life-threatening serotonin syndrome has been reported with SSRIs and SNRIs as monotherapy, but particularly with concomitant use of other serotonergic drugs and drugs that impair the metabolism of serotonin.

A study of 26,005 antidepressant users has reported 3.6 times more upper GI bleeding episodes with the use of SSRIs relative to the population who did not receive antidepressant medications. Upper gastrointestinal tract bleeding was observed in 3.9 times more frequently in patients receiving this drug.

Decreased weight gain has been observed in association with use in children and adolescents.

Urinary retention and galactorrhea have been reported with other SSRIs.

The estimates of the incidence of untoward sexual experience and performance may underestimate their actual incidence, partly because patients and physicians may be reluctant to discuss this issue. In placebo-controlled clinical trials ejaculation disorder (primarily ejaculation delay) was reported as a treatment-emergent side effect at an incidence of 6% and at least twice the incidence in placebo-treated male patients.

Patients have developed QT prolongation of at least 450 msec.