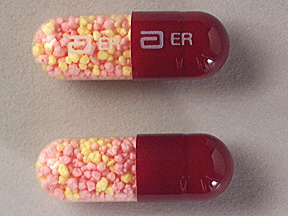 Erythromycin belongs to a group of drugs called macrolide antibiotics. Macrolide antibiotics slow the growth of, or sometimes kill, sensitive bacteria by reducing the production of important proteins needed by the bacteria to survive. Erythromycin is used to treat or prevent many different types of infections caused by bacteria. Erythromycin may also be used for purposes not listed in this medication guide. Some medicines can cause unwanted or dangerous effects when used with erythromycin. Your doctor may need to change your treatment plan if you use cisApride, Pimozide, ergotamine, or dihydroergotamine. Learn more

Erythromycin is used to treat or prevent many different types of infections caused by bacteria.

Erythromycin may also be used for purposes not listed in this medication guide.

Some medicines can cause unwanted or dangerous effects when used with erythromycin. Your doctor may need to change your treatment plan if you use cisapride, pimozide, ergotamine, or dihydroergotamine.

Before you take erythromycin, tell your doctor if you have liver disease, myasthenia gravis, a heart rhythm disorder, a history of Long QT syndrome, or low levels of potassium or magnesium in your blood.

Take this medicine for the full prescribed length of time. Your symptoms may improve before the infection is completely cleared. Skipping doses may also increase your risk of further infection that is resistant to antibiotics. Erythromycin will not treat a viral infection such as the common cold or flu.

Antibiotic medicines can cause diarrhea, which may be a sign of a new infection. If you have diarrhea that is watery or bloody, stop taking erythromycin and call your doctor. Do not use anti-diarrhea medicine unless your doctor tells you to.

You should not use erythromycin if you are allergic to it.

Some medicines can cause unwanted or dangerous effects when used with erythromycin. Your doctor may change your treatment plan if you also use:

It is not known whether erythromycin will harm an unborn baby. Tell your doctor if you are pregnant or plan to become pregnant.

How should I use erythromycin?

Take erythromycin exactly as prescribed by your doctor. Follow all directions on your prescription label and read all medication guides or instruction sheets. Your doctor may occasionally change your dose. Use the medicine exactly as directed.

Erythromycin injection is given as an infusion into a vein, for a severe infection. A healthcare provider will give your first dose and may teach you how to properly use the medication by yourself.

Read and carefully follow any Instructions for Use provided with your medicine. Do not use erythromycin if you don't understand all instructions for proper use. Ask your doctor or pharmacist if you have questions.

Prepare your injection only when you are ready to give it. Do not use if the medicine looks cloudy, has changed colors, or has particles in it. Call your pharmacist for new medicine.

You must chew the chewable tablet before you swallow it.

Do not crush, chew, or break a delayed-release capsule or tablet. Swallow it whole.

Use this medicine for the full prescribed length of time, even if your symptoms quickly improve. Skipping doses can increase your risk of infection that is resistant to medication. Erythromycin will not treat a viral infection such as the flu or a common cold.

This medicine can affect the results of certain medical tests. Tell any doctor who treats you that you are using erythromycin.

What happens if I miss a dose of Erythromycin?

Use the medicine as soon as you can, but skip the missed dose if it is almost time for your next dose. Do not use two doses at one time.

What happens if I overdose of Erythromycin?

What should I avoid while using erythromycin?

Get emergency medical help if you have signs of an allergic reaction to erythromycin (hives, difficult breathing, swelling in your face or throat) or a severe skin reaction (fever, sore throat, burning eyes, skin pain, red or purple skin rash with blistering and peeling).

Serious side effects may be more likely in older adults, including hearing loss, or a life-threatening fast heart rate.

Common erythromycin side effects may include:

What other drugs will affect erythromycin?

Many drugs can interact with erythromycin, and some drugs should not be used at the same time. Tell your doctor about all your current medicines and any medicine you start or stop using. This includes prescription and over-the-counter medicines, vitamins, and herbal products. Not all possible interactions are listed here.

Remember, keep this and all other medicines out of the reach of children, never share your medicines with others, and use erythromycin only for the indication prescribed.

Erythromycin estolate is contraindicated in patients with preexisting liver disease. Hepatic dysfunction with or without jaundice has occurred, mainly in adults. It may be accompanied by malaise, nausea, vomiting, abdominal colic, fever, and in some instances, severe abdominal pain may lead to an abdominal surgical emergency. Discontinue erythromycin promptly if the above findings occur.

Along with its needed effects, erythromycin may cause some unwanted effects. Although not all of these side effects may occur, if they do occur they may need medical attention.

Check with your doctor immediately if any of the following side effects occur while taking erythromycin:

The most common side effects associated with oral erythromycin were gastrointestinal and were dose-related.

QT prolongation has been reported both in otherwise healthy patients and in patients with a history of heart disease or who were on other potentially arrhythmogenic drugs. Most affected patients were receiving erythromycin intravenously. In a recent retrospective study of 278 consecutive patients who had received IV erythromycin lactobionate, 39% of 49 evaluable patients developed moderate to severe delay in ventricular repolarization (QTc interval greater than or equal to 500 msec) during treatment. Of the 278 patients, torsade de pointes was observed in one patient (less than 0.4%).

Arrhythmias and hypotension have been reported following IV administration.

One case of erythromycin-related polymorphous ventricular tachycardia reported in a patient treated for pneumonia was characterized by a normal QT interval.

Hepatic dysfunction (including increased liver enzymes) and hepatocellular and/or cholestatic hepatitis (with or without jaundice) have been reported with oral erythromycin.

Reversible hearing loss was reported primarily in patients with renal dysfunction and in patients receiving high doses of erythromycin.

A case of hemolytic anemia has been reported in a patient with severe underlying diseases and erythromycin-associated hepatitis.

Slow infusion of diluted erythromycin (continuously or intermittently over no less than 20 to 60 minutes) almost invariably alleviated venous irritation.