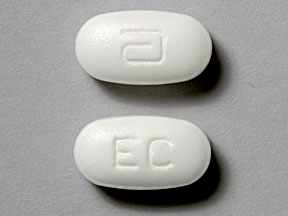 Ery-Tab is a delayed release tablet containing either 250 mg, 333 mg, or 500 mg of Erythromycin as the free base. Erythromycin belongs to a group of drugs called macrolide antibiotics. Macrolide antibiotics slow the growth of, or sometimes kill, sensitive bacteria by reducing the production of important proteins needed by the bacteria to survive. Ery-Tab is used to treat or prevent many different types of infections caused by bacteria. Ery-Tab may also be used for purposes not listed in this medication guide. Learn more

Note: This document contains side effect information about erythromycin. Some of the dosage forms listed on this page may not apply to the brand name Ery-Tab.

Erythromycin estolate is contraindicated in patients with preexisting liver disease. Hepatic dysfunction with or without jaundice has occurred, mainly in adults. It may be accompanied by malaise, nausea, vomiting, abdominal colic, fever, and in some instances, severe abdominal pain may lead to an abdominal surgical emergency. Discontinue erythromycin promptly if the above findings occur.

Along with its needed effects, erythromycin (the active ingredient contained in Ery-Tab) may cause some unwanted effects. Although not all of these side effects may occur, if they do occur they may need medical attention.

Check with your doctor immediately if any of the following side effects occur while taking erythromycin:

The most common side effects associated with oral erythromycin (the active ingredient contained in Ery-Tab) were gastrointestinal and were dose-related.

QT prolongation has been reported both in otherwise healthy patients and in patients with a history of heart disease or who were on other potentially arrhythmogenic drugs. Most affected patients were receiving erythromycin intravenously. In a recent retrospective study of 278 consecutive patients who had received IV erythromycin lactobionate, 39% of 49 evaluable patients developed moderate to severe delay in ventricular repolarization (QTc interval greater than or equal to 500 msec) during treatment. Of the 278 patients, torsade de pointes was observed in one patient (less than 0.4%).

Arrhythmias and hypotension have been reported following IV administration.

One case of erythromycin-related polymorphous ventricular tachycardia reported in a patient treated for pneumonia was characterized by a normal QT interval.

Hepatic dysfunction (including increased liver enzymes) and hepatocellular and/or cholestatic hepatitis (with or without jaundice) have been reported with oral erythromycin.

Reversible hearing loss was reported primarily in patients with renal dysfunction and in patients receiving high doses of erythromycin.

A case of hemolytic anemia has been reported in a patient with severe underlying diseases and erythromycin-associated hepatitis.

Slow infusion of diluted erythromycin (the active ingredient contained in Ery-Tab) (continuously or intermittently over no less than 20 to 60 minutes) almost invariably alleviated venous irritation.