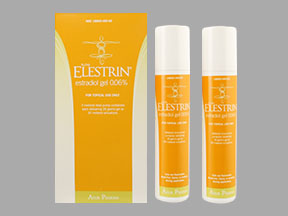 Elestrin is Estradiol 0.06% in a colorless, non-staining gel supplied in a non-aerosol, metered-dose pump container. Estradiol is a form of estrogen, a female sex hormone made in the ovaries that regulates many processes in the body. Elestrin is used after menopause to reduce moderate to severe hot flashes. Ovaries normally stop making estrogens when a woman is between 45 to 55 years old. This drop in body estrogen levels causes the “change of life” or menopause (the end of monthly menstrual periods). When estrogen levels begin dropping, some women develop very uncomfortable symptoms, such as feelings of warmth in the face, neck, and chest, or sudden strong feelings of heat and sweating (“hot flashes”). In some women, the symptoms are mild, and they will not need estrogens. In other women, symptoms can be more severe and treatment with products such as Elestrin may help. Learn more

Note: This document contains side effect information about estradiol. Some of the dosage forms listed on this page may not apply to the brand name Elestrin.

Common side effects of Elestrin include: cerebrovascular accident, infection, and malignant neoplasm of breast. Other side effects include: abdominal pain, nausea, pruritus, skin rash, and vaginitis. See below for a comprehensive list of adverse effects.

Estrogens increase the risk of endometrial cancer; monitor for abnormal vaginal bleeding. Estrogens with or without progestins should not be used for the prevention of cardiovascular disease or dementia. Increased risks of myocardial infarction, stroke, invasive breast cancer, pulmonary emboli, and deep vein thrombosis in postmenopausal women (50 to 79 years of age) have been reported. An increased risk of developing probable dementia in postmenopausal women 65 years of age or older has also been reported in women receiving estrogen alone or estrogen combined with progestins. Risks should be assumed to be similar for other doses, combinations, and dosage forms of estrogens and progestins. Estrogens, with or without progestins, should be prescribed at the lowest effective doses and for the shortest duration possible.

Use of unopposed estrogens increases the risk of endometrial cancer, while addition of a progestin decreases the risk of endometrial hyperplasia. Rule out malignancy if abnormal vaginal bleeding develops. Do not use estrogen alone or in combination with progestin to prevent cardiovascular disease or dementia. There is an increased risk of cardiovascular disorders (ie, DVT, pulmonary embolism, stroke, myocardial infarction) with combination therapy in women 50 years or older, and an increased risk of dementia in women 65 years or older with estrogen monotherapy or combination therapy. Combination therapy also increases the risk of invasive breast cancer. Prescribe estrogens with or without progestins at the lowest effective dose and for the shortest duration consistent with risks and treatment goals.

Along with its needed effects, estradiol (the active ingredient contained in Elestrin) may cause some unwanted effects. Although not all of these side effects may occur, if they do occur they may need medical attention.

Check with your doctor immediately if any of the following side effects occur while taking estradiol:

Get emergency help immediately if any of the following symptoms of overdose occur while taking estradiol:

Rare (less than 0.1%): Aggravation of epilepsy

Rare (less than 0.1%): Anaphylactic reaction (with a past history of allergic reaction)