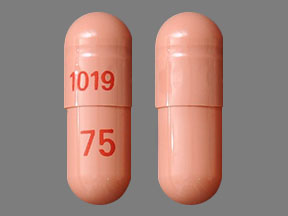 Effexor (venlafaxine) is an antidepressant belonging to a group of drugs called selective serotonin and norEpinephrine reuptake inhibitors (SSNRIs). Venlafaxine affects chemicals in the brain that may be unbalanced in people with depression. Venlafaxine is used to treat major depressive disorder, anxiety and panic disorder. You should not take Effexor if you have uncontrolled narrow-angle glaucoma, or if you are being treated with Methylene Blue injection. Do not use Effexor within 7 days before or 14 days after you have used a MAO inhibitor, such as isocarboxazid, Linezolid, Methylene Blue injection, phenelzine, rasagiline, selegiline, or tranylcypromine. Learn more

How much is my Effexor xr co-pay with Medicare?

Ways to Save on Effexor xr

Here are some ways that may lower the cost of your effexor xr prescription.

Note: This document contains side effect information about venlafaxine. Some of the dosage forms listed on this page may not apply to the brand name Effexor.

Antidepressants increased the risk of suicidal thinking and behavior in children, adolescents, and young adults in short-term studies with major depressive disorder (MDD) and other psychiatric disorders. Short-term studies did not show an increase in the risk of suicidality with antidepressants compared to placebo in adults older than 24 years, and there was a reduction in risk with antidepressants compared with placebo in adults aged 65 or older. This risk must be balanced with the clinical need. Monitor patients closely for clinical worsening, suicidality, or unusual changes in behavior. Families and caregivers should be advised of the need for close observation and communication with the prescriber. Not approved for use in pediatric patients

Along with its needed effects, venlafaxine (the active ingredient contained in Effexor) may cause some unwanted effects. Although not all of these side effects may occur, if they do occur they may need medical attention.

Check with your doctor immediately if any of the following side effects occur while taking venlafaxine:

The most commonly reported side effects were nausea, headache, somnolence, and dizziness.