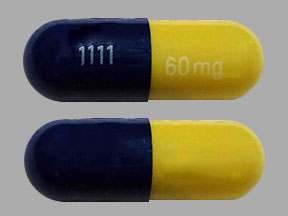 Duloxetine is a selective serotonin and norepinephrine reuptake inhibitor antidepressant (SSNRI). Duloxetine affects chemicals in the brain that may be unbalanced in people with depression.

Duloxetine is also used in adults to treat fibromyalgia (a chronic pain disorder), or chronic muscle or joint pain (such as low back pain and osteoarthritis pain).

Do not take duloxetine within 5 days before or 14 days after you have used an MAO inhibitor, such as isocarboxazid, linezolid, methylene blue injection, phenelzine, rasagiline, selegiline, or tranylcypromine. A dangerous drug interaction could occur.

Some young people have thoughts about suicide when first taking an antidepressant. Stay alert to changes in your mood or symptoms. Report any new or worsening symptoms to your doctor.

Do not stop using duloxetine without first talking to your doctor.

You should not use duloxetine if you are allergic to it.

Be sure your doctor knows if you also take stimulant medicine, opioid medicine, herbal products, or medicine for depression, mental illness, Parkinson's disease, migraine headaches, serious infections, or prevention of nausea and vomiting. These medicines may interact with duloxetine and cause a serious condition called serotonin syndrome.

Duloxetine is not approved for use by anyone younger than 7 years old.

Some young people have thoughts about suicide when first taking an antidepressant. Your doctor should check your progress at regular visits. Your family or other caregivers should also be alert to changes in your mood or symptoms.

If you are pregnant, your name may be listed on a pregnancy registry to track the effects of duloxetine on the baby.

How should I take duloxetine?

Take duloxetine exactly as prescribed by your doctor. Follow all directions on your prescription label and read all medication guides or instruction sheets. Your doctor may occasionally change your dose.

Taking duloxetine in higher doses or more often than prescribed will not make it more effective, and may increase side effects.

Swallow the capsule whole and do not crush, chew, break, or open it.

You may take duloxetine with or without food.

It may take up to 4 weeks before your symptoms improve. Keep using the medication as directed and tell your doctor if your symptoms do not improve.

Your blood pressure will need to be checked often.

What happens if I miss a dose of Duloxetine hydrochloride?

What happens if I overdose of Duloxetine hydrochloride?

What should I avoid while taking duloxetine?

Avoid driving or hazardous activity until you know how duloxetine will affect you. Your reactions could be impaired. Avoid getting up too fast from a sitting or lying position, or you may feel dizzy. Dizziness or fainting can cause falls, accidents, or severe injuries.

Avoid drinking alcohol. It may increase your risk of liver damage.

Ask your doctor before taking a nonsteroidal anti-inflammatory drug (NSAID) such as aspirin, ibuprofen (Advil, Motrin), naproxen (Aleve), celecoxib (Celebrex), diclofenac, indomethacin, meloxicam, and others. Using an NSAID with duloxetine may cause you to bruise or bleed easily.

Get emergency medical help if you have signs of an allergic reaction to duloxetine (hives, difficult breathing, swelling in your face or throat) or a severe skin reaction (fever, sore throat, burning eyes, skin pain, red or purple skin rash with blistering and peeling).

Common duloxetine side effects may include:

What other drugs will affect duloxetine?

Many drugs can affect duloxetine. This includes prescription and over-the-counter medicines, vitamins, and herbal products. Not all possible interactions are listed here. Tell your doctor about all your current medicines and any medicine you start or stop using.

Remember, keep this and all other medicines out of the reach of children, never share your medicines with others, and use duloxetine only for the indication prescribed.

Along with its needed effects, duloxetine may cause some unwanted effects. Although not all of these side effects may occur, if they do occur they may need medical attention.

Orthostatic hypotension and syncope tend to occur within the first week of therapy; however, they may occur at any time during treatment, particularly after dose increases. The risk of blood pressure decreases may be greater when duloxetine is given concomitantly with drugs that may induce orthostatic hypotension, such as antihypertensives, with potent CYP450 1A2 inhibitors, or with duloxetine doses above 60 mg per day.

Concomitant use of aspirin, NSAIDs, warfarin, and other anticoagulants may increase the risk of bleeding events associated with duloxetine.