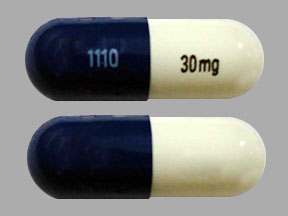 Along with its needed effects, duloxetine may cause some unwanted effects. Although not all of these side effects may occur, if they do occur they may need medical attention.

Orthostatic hypotension and syncope tend to occur within the first week of therapy; however, they may occur at any time during treatment, particularly after dose increases. The risk of blood pressure decreases may be greater when duloxetine is given concomitantly with drugs that may induce orthostatic hypotension, such as antihypertensives, with potent CYP450 1A2 inhibitors, or with duloxetine doses above 60 mg per day.

Concomitant use of aspirin, NSAIDs, warfarin, and other anticoagulants may increase the risk of bleeding events associated with duloxetine.