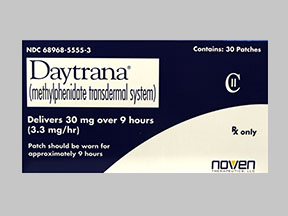 Daytrana is a skin patch that contains methylphenidate, a central nervous system stimulant. Methylphenidate affects chemicals in the brain and nerves that contrIbute to hyperactivity and impulse control. Daytrana patches are used to treat attention deficit hyperactivity disorder (ADHD) . Daytrana may also be used for purposes not listed in this medication guide. You should not use Daytrana if you have glaucoma, tics or Tourette's syndrome, or severe anxiety, tension, or agitation. Do not use methylphenidate if you have taken an MAO inhibitor in the past 14 days, including isocarboxazid, Linezolid, Methylene Blue injection, phenelzine, rasagiline, selegiline, tranylcypromine, and others. Learn more

Daytrana is a skin patch that contains methylphenidate, a central nervous system stimulant. Methylphenidate affects chemicals in the brain and nerves that contribute to hyperactivity and impulse control.

Daytrana may also be used for purposes not listed in this medication guide.

You should not use Daytrana if you have glaucoma, tics or Tourette's syndrome, or severe anxiety, tension, or agitation. Do not use methylphenidate if you have taken an MAO inhibitor in the past 14 days, including isocarboxazid, linezolid, methylene blue injection, phenelzine, rasagiline, selegiline, tranylcypromine, and others.

Methylphenidate may be habit forming. Never share this medicine with another person, especially someone with a history of drug abuse or addiction.

Using Daytrana improperly can cause death or serious side effects on the heart.

Do not use Daytrana if you have taken an MAO inhibitor in the past 14 days. A dangerous drug interaction could occur. MAO inhibitors include isocarboxazid, linezolid, methylene blue injection, phenelzine, rasagiline, selegiline, and tranylcypromine.

You should not use Daytrana patches if you are allergic to methylphenidate (Ritalin, Concerta, Metadate, and others), or if you have:

Daytrana is not approved for use by anyone younger than 6 years old.

Some stimulants have caused sudden death in certain people. Tell your doctor if you have:

To make sure Daytrana is safe for you, tell your doctor if you or anyone in your family has ever had:

Tell your doctor if you are pregnant or breast-feeding.

How should I use Daytrana?

Use Daytrana exactly as prescribed by your doctor. Using this medicine improperly can cause death or serious side effects on the heart.

Read all patient information, medication guides, and instruction sheets provided to you. Daytrana skin patches come with a dosing schedule that shows when to apply and remove the skin patch based on 9 hour time frames. Ask your doctor or pharmacist if you have any questions.

Methylphenidate may be habit-forming. Never share this medicine with another person, especially someone with a history of drug abuse or addiction. Selling or giving away this medicine is against the law.

Apply the Daytrana patch to a clean and dry area on your hip. Press firmly onto the skin with the palm of your hand for about 30 seconds. The patch should stay on while swimming or bathing. The effects of this medicine may not be noticeable until 2 hours after applying the skin patch.

Wash your hands after applying a Daytrana skin patch.

Remove the patch 9 hours after it was applied. Peel off slowly and fold the Daytrana patch in half so it sticks together. Flush the folded patch down the toilet or place it into a waste can with a lid. Use baby oil or lotion to remove any adhesive residue that stays on your skin.

If you discontinue using Daytrana, ask your pharmacist where to locate a drug take-back disposal program. If there is no take-back program, fold the used patch together and flush any unused patches at that time down the toilet. Disposal of medicines by flushing is recommended to reduce the danger of accidental overdose causing death. This advice applies to a very small number of medicines only. The FDA, working with the manufacturer, has determined this method to be the most appropriate route of disposal and presents the least risk to human safety.

Apply a new patch to the opposite hip. Do not wear a Daytrana patch on the same side of the body two days in a row.

If a patch falls off, replace it with a new one. Then remove the new patch after it has been 9 hours since you applied the first patch. Do not wear a patch longer than 9 hours per day, even if you apply a new Daytrana patch to replace one that has fallen off. Use the dosing schedule provided to track your patch wearing time.

Over time, Daytrana transdermal can cause your skin to lighten around areas where the patches are worn. This effect may be permanent. Check your skin often. Tell your doctor if you see new areas of lighter color under or around a skin patch. Do not change your doses or medication schedule without your doctor's advice.

If you have trouble sleeping or loss of appetite in the evenings, try removing the skin patch earlier in the day. Never cut the Daytrana skin patch to try and reduce the amount of medicine you receive while wearing it.

Children using this medicine should be warned never to remove the skin patch and place it onto another person. Serious side effects may result.

While using Daytrana, your doctor will need to check your progress at regular visits. Your heart rate, blood pressure, height and weight may also need to be checked often.

Keep each Daytrana patch in its sealed pouch until you are ready to use it. Store at room temperature away from heat and moisture. Do not refrigerate or freeze. Throw away any unused patches if it has been more than 2 months since you opened the original package.

Keep track of the amount of medicine used from each new package. Methylphenidate is a drug of abuse and you should be aware if anyone is using your medicine improperly or without a prescription.

What happens if I miss a dose of Daytrana?

Apply a patch as soon as you remember, and do not wear the patch for longer than 9 hours. You may need to shorten the wearing time to less than 9 hours if you apply a patch later than usual and you have sleep problems. Do not apply two patches at the same time to make up the missed dose.

What happens if I overdose of Daytrana?

Seek emergency medical attention or call the Poison Help line at 1-800-222-1222. Remove the patch right away and clean the skin area with soap and water. An overdose of methylphenidate can be fatal.

What should I avoid while using Daytrana?

Avoid placing a patch on skin that is oily, irritated, or damaged. Avoid a skin area that will be rubbed by a waistband or tight clothing.

Get emergency medical help if you have signs of an allergic reaction to Daytrana: hives; difficulty breathing; swelling of your face, lips, tongue, or throat.

Stop using Daytrana and call your doctor at once if you have:

Methylphenidate can affect growth in children. Tell your doctor if your child is not growing at a normal rate while using this medicine.

Common Daytrana side effects may include:

What other drugs will affect Daytrana?

This list is not complete. Other drugs may interact with methylphenidate, including prescription and over-the-counter medicines, vitamins, and herbal products. Not all possible drug interactions are listed here.

Remember, keep this and all other medicines out of the reach of children, never share your medicines with others, and use Daytrana only for the indication prescribed.

Commonly reported side effects of methylphenidate include: insomnia, nausea, headache, vomiting, decreased appetite, and xerostomia. Other side effects include: anxiety, tic disorder, hyperhidrosis, and irritability. See below for a comprehensive list of adverse effects.

Along with its needed effects, methylphenidate may cause some unwanted effects. Although not all of these side effects may occur, if they do occur they may need medical attention.

Among patients 7 to 10 years old, consistently medicated (i.e., receiving methylphenidate for 7 days per week) for over 14 months, as well as in naturalistic subgroups of newly methylphenidate-treated patients over 36 months (ages of 10 to 13 years), a temporary slowing in growth rate (on average, a total of about 2 cm less growth in height and 2.7 kg less growth in weight over 3 years), has been observed compared to non-medicated patients. This slowing in growth rate has been observed without evidence of growth rebound.