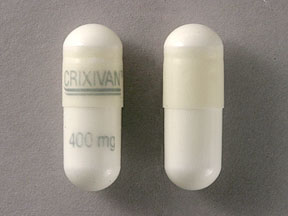 Crixivan is an antiviral medicine that prevents human immunodeficiency virus (HIV) from multiplying in your body. Crixivan is used to treat HIV, the virus that can cause acquired immunodeficiency syndrome (AIDS). This medicine is not a cure for HIV or AIDS. Crixivan may also be used for purposes not listed in this medication guide. Tell your doctor about all your current medicines and any you start or stop using. Many drugs can interact with Crixivan, and some drugs should not be used together. You should not use Crixivan if you are allergic to it. Learn more

Note: This document contains side effect information about indinavir. Some of the dosage forms listed on this page may not apply to the brand name Crixivan.

Common side effects of Crixivan include: nephrolithiasis and urolithiasis. See below for a comprehensive list of adverse effects.

Along with its needed effects, indinavir (the active ingredient contained in Crixivan) may cause some unwanted effects. Although not all of these side effects may occur, if they do occur they may need medical attention.

Check with your doctor immediately if any of the following side effects occur while taking indinavir:

Asymptomatic hyperbilirubinemia (total bilirubin at least 2.5 mg/dL [43 mcmol/L]) has been reported in about 14% of patients, primarily as elevated indirect bilirubin; this was associated with elevated ALT, AST, or alkaline phosphatase in less than 1% of patients. Most patients continued therapy without dose reduction and bilirubin values gradually declined towards baseline. Hyperbilirubinemia was reported more often at doses greater than 2.4 g/day compared to doses up to 2.4 g/day.

Very common (10% or more): Nephrolithiasis/urolithiasis (including flank pain with or without hematuria [including microscopic hematuria]; about 12.4%)

The cumulative frequency of nephrolithiasis events increased with duration of drug exposure; however, risk over time remained relatively constant. Of patients who developed nephrolithiasis/urolithiasis in clinical trials, 7 of 246 developed hydronephrosis and 11 of 246 underwent stent placement; after the acute episode, 12 of 246 patients discontinued therapy. In general, nephrolithiasis (including flank pain with or without hematuria [including microscopic hematuria]) was not associated with renal dysfunction and resolved with hydration and temporary interruption of therapy (e.g., 1 to 3 days). Nephrolithiasis/urolithiasis was reported more often at doses greater than 2.4 g/day compared to doses up to 2.4 g/day.

Increased creatinine (greater than 300% ULN) has been reported in up to 0.2% of patients.

During postmarketing experience, interstitial nephritis did not resolve after some patients stopped this drug.

Increased glucose (greater than 250 mg/dL) has been reported in up to 1.6% of patients.

Drug deposition in synovial fluid may have resulted in monoarthritis in a patient. Intraarticular drug levels of 1.36 mcg/mL were measured in the patient's knee joint.