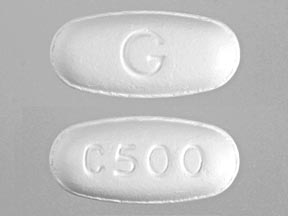 Clarithromycin is a macrolide antibiotic that fights bacteria in your body. Clarithromycin is used to treat many different types of bacterial infections affecting the skin and respiratory system. Clarithromycin is also used together with other medicines to treat stomach ulcers caused by Helicobacter pylori. Take clarithromycin for the full prescribed length of time. Your symptoms may improve before the infection is completely cleared. Skipping doses may also increase your risk of further infection that is resistant to antibiotics. This medicine will not treat a viral infection such as the common cold or flu. Learn more

Commonly reported side effects of clarithromycin include: dysgeusia. See below for a comprehensive list of adverse effects.

Along with its needed effects, clarithromycin may cause some unwanted effects. Although not all of these side effects may occur, if they do occur they may need medical attention.

Check with your doctor immediately if any of the following side effects occur while taking clarithromycin:

The most common side effects were abdominal pain/discomfort, diarrhea, nausea, vomiting, and dysgeusia/taste perversion.

Deafness was reported mainly in elderly women and was usually reversible.

The incidence of dry mouth was similar for patients treated with 1 to 2 g/day, but was generally about 3 to 4 times as frequent for those treated with 4 g/day.

Severity of pseudomembranous colitis has ranged from mild to life-threatening.

Tooth discoloration was usually reversible with professional dental cleaning after the drug was stopped.

These side effects are specific to the IV formulation.

Frequency not reported: Hepatocellular and/or cholestatic hepatitis (with or without jaundice), drug-induced hepatotoxicity, fulminant hepatic failure

Hepatic dysfunction (sometimes severe and usually reversible), including increased liver enzymes, and hepatocellular and/or cholestatic hepatitis, with or without jaundice have been reported. In some instances, hepatic failure with fatal outcome has been reported and generally has been associated with serious underlying diseases (e.g., preexisting liver disease) and/or concomitant medications (e.g., hepatotoxic agents).

Drug-induced hepatotoxicity was rare and typically associated with higher doses (1 to 2 g/day) and high serum drug levels. The enzyme elevation pattern was usually cholestatic with minimal elevations of AST and ALT.

Allergic reactions have ranged from urticaria and mild skin eruptions to rare cases of anaphylaxis.

A 92-year-old female admitted for heart failure and a right upper lobe infiltrate was started on clarithromycin 500 mg. The following day, this drug was discontinued and IV antibiotics were initiated due to persisting fever. She received only 1 dose of this drug. On day 6 of the hospitalization, the patient was afebrile, IV antibiotics were stopped, and this drug was again started. Two hours after the dose, the patient developed swelling in her lips, jaw, tongue, mouth, and face. The patient was given diphenhydramine and the clarithromycin was discontinued. She was discharged the following day.

Many reports of extended-release tablets in the stool occurred in patients with anatomic (including ileostomy or colostomy) or functional gastrointestinal disorders with shortened gastrointestinal transit times. In several reports, tablet residues occurred in the context of diarrhea.

Colchicine toxicity has been reported with concomitant use of this drug and colchicine, especially in the elderly; some occurred in patients with renal dysfunction. Death occurred in some such patients.

The incidence of insomnia was similar for patients treated with 1 to 2 g/day, but was generally about 3 to 4 times as frequent for those treated with 4 g/day.

Increased alkaline phosphatase (greater than 5 x ULN) was reported in up to 2% of patients.

Hypoglycemia has been reported in patients receiving oral hypoglycemic agents or insulin.

The incidence of dyspnea was similar for patients treated with 1 to 2 g/day, but was generally about 3 to 4 times as frequent for those treated with 4 g/day.

Uveitis was reported primarily in patients treated with concomitant rifabutin; most cases were reversible.

A case of corneal opacities was reported in a patient with AIDS and Mycobacterium avium complex bacteremia. The patient's ocular signs and symptoms resolved upon substitution with azithromycin.

Elevated BUN (greater than 50 mg/dL) was reported in less than 1% of patients.

In some cases of rhabdomyolysis, this drug was coadministered with statins, fibrates, colchicine, or allopurinol.