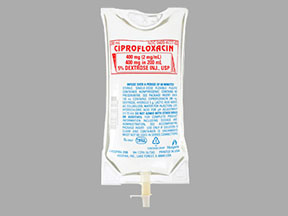 Ciprofloxacin is also used to treat people who have been exposed to anthrax or certain types of plague.

Ciprofloxacin should be used only for infections that cannot be treated with a safer antibiotic.

Fluoroquinolone antibiotics can cause serious or disabling side effects that may not be reversible, such as tendon rupture or nerve problems.

Ciprofloxacin can cause serious side effects, including tendon problems, nerve damage, serious mood or behavior changes, or low blood sugar.

Stop using this medicine and call your doctor at once if you have symptoms such as: headache, hunger, irritability, numbness, tingling, burning pain, confusion, agitation, paranoia, problems with memory or concentration, thoughts of suicide, or sudden pain or movement problems in any of your joints.

In rare cases, ciprofloxacin may cause damage to your aorta, which could lead to dangerous bleeding or death. Get emergency medical help if you have severe and constant pain in your chest, stomach, or back.

You may not be able to use ciprofloxacin if you have a muscle disorder. Tell your doctor if you have a history of myasthenia gravis.

You should not use ciprofloxacin if you are allergic to it, or if:

Ciprofloxacin may cause swelling or tearing of a tendon (the fiber that connects bones to muscles in the body), especially in the Achilles' tendon of the heel. This can happen during treatment or up to several months after you stop taking this medicine. Tendon problems may be more likely in certain people (children and older adults, or people who use steroid medicine or have had an organ transplant).

It is not known whether this medicine will harm an unborn baby. Tell your doctor if you are pregnant.

How should I take ciprofloxacin?

Take ciprofloxacin exactly as prescribed by your doctor. Follow all directions on your prescription label and read all medication guides or instruction sheets.

You may take ciprofloxacin with or without food, at the same time each day.

Shake the oral suspension (liquid) for 15 seconds before you measure a dose. Use the dosing syringe provided, or use a medicine dose-measuring device (not a kitchen spoon). Do not give ciprofloxacin oral suspension through a feeding tube.

Swallow the extended-release tablet whole and do not crush, chew, or break it.

Use ciprofloxacin for the full prescribed length of time, even if your symptoms quickly improve. Skipping doses can increase your risk of infection that is resistant to medication. This medicine will not treat a viral infection such as the flu or a common cold.

Store at room temperature away from moisture and heat. Do not allow the liquid medicine to freeze. Throw away any unused liquid after 14 days.

What should I avoid while taking ciprofloxacin?

Do not take ciprofloxacin with dairy products such as milk or yogurt, or with calcium- fortified juice. You may eat or drink these products with your meals, but do not use them alone when taking ciprofloxacin. They could make the medication less effective.

Using caffeine while taking ciprofloxacin can increase the effects of the caffeine.

Ciprofloxacin could make you sunburn more easily. Avoid sunlight or tanning beds. Wear protective clothing and use sunscreen (SPF 30 or higher) when you are outdoors. Tell your doctor if you have severe burning, redness, itching, rash, or swelling after being in the sun.

Get emergency medical help if you have signs of an allergic reaction to ciprofloxacin (hives, difficult breathing, swelling in your face or throat) or a severe skin reaction (fever, sore throat, burning in your eyes, skin pain, red or purple skin rash that spreads and causes blistering and peeling).

Ciprofloxacin can cause serious side effects, including tendon problems, side effects on your nerves (which may cause permanent nerve damage), serious mood or behavior changes (after just one dose), or low blood sugar (which can lead to coma).

Stop taking this medicine and call your doctor at once if you have:

In rare cases, ciprofloxacin may cause damage to your aorta, the main blood artery of the body. This could lead to dangerous bleeding or death. Get emergency medical help if you have severe and constant pain in your chest, stomach, or back.

Also, stop using this medicine and call your doctor at once if you have:

Common ciprofloxacin side effects may include:

What other drugs will affect ciprofloxacin?

Some medicines can make ciprofloxacin much less effective when taken at the same time. If you take any of the following medicines, take your dose 2 hours before or 6 hours after you take the other medicine.

This list is not complete. Other drugs may interact with ciprofloxacin, including prescription and over-the-counter medicines, vitamins, and herbal products. Not all possible drug interactions are listed here.

Remember, keep this and all other medicines out of the reach of children, never share your medicines with others, and use ciprofloxacin only for the indication prescribed.

Commonly reported side effects of ciprofloxacin include: pyelonephritis, arthralgia, and musculoskeletal signs and symptoms. Other side effects include: myalgia, and pain. See below for a comprehensive list of adverse effects.

Along with its needed effects, ciprofloxacin may cause some unwanted effects. Although not all of these side effects may occur, if they do occur they may need medical attention.

Check with your doctor immediately if any of the following side effects occur while taking ciprofloxacin:

The most common side effects (from clinical trials of all formulations, doses, durations of therapy, and indications) were nausea, diarrhea, abnormal liver function tests, vomiting, and rash. The most common side effects reported with the IV formulation were nausea, diarrhea, vomiting, injection and infusion site reactions, rash, and increased transaminases (transient).

The onset of pseudomembranous colitis symptoms has been reported during or after antimicrobial treatment.

Photosensitivity was seen most often when patients were exposed to intense sun (e.g., as when used to treat or prevent travelers' diarrhea).

A 27-year-old woman with mild systemic erythematosus developed toxic epidermal necrolysis (TEN) after starting a second oral course of this drug after a prior 5-day course. She developed a rash, high fever, and diarrhea after taking the 2nd dose and presented with diffuse rash, epidermal sloughing of 60% of the skin, desquamation of the lips, shock, and respiratory distress. She died on the 28th hospital day of TEN, right ventricular failure, and acute respiratory distress syndrome. As of 2003, 9 cases of TEN, including 5 fatalities, had been reported in the literature.

Seizures have been reported in 2 patients given this drug and foscarnet. The temporal association between the onset of seizures and drug administration suggests a possible drug interaction; causal relationship was not established in either case. Both drugs are individually epileptogenic; concurrent use may potentiate risk of seizures.

Cases of sensory or sensorimotor axonal polyneuropathy (affecting small and/or large axons) resulting in paresthesias, hypoesthesias, dysesthesias, and weakness have been reported.

Depression and psychotic reactions (both potentially culminating in self-injurious behavior such as suicidal ideations/thoughts and attempted or completed suicide) have been reported.

Agitation, confusion, and toxic psychosis have also been reported during postmarketing experience.

Crystalluria has been reported in patients with alkaline urine and did not necessarily lead to nephrotoxicity. At physiological urinary pH, the risk of crystalluria was considered minor.

Vaginal candidiasis has also been reported during postmarketing experience.

Local IV site reactions occurred more often if the infusion time was 30 minutes or less. These reactions have appeared as local skin reactions and resolved quickly when infusion was completed.

Injection site irritation and induration have been reported with IV infusion time 30 minutes or less (instead of the recommended 1 hour) or when a small vein in the back of the hand was used.

Arthropathy has primarily been a concern in pediatric patients; however, at least 1 case was described in an adult cystic fibrosis patient receiving this drug. Although cystic fibrosis arthropathy and hypertrophic pulmonary osteoarthropathy typically occur in 7% to 8% of cystic fibrosis adults and adolescents, the arthropathy exhibited in this patient did not resemble either. Several elements in its presentation strongly supported the diagnosis of ciprofloxacin-induced arthropathy, such as: a consistent time of onset with other reported cases of suspected quinolone-induced arthropathy (usually 3 weeks after starting therapy); a lack of history of arthralgia in the patient; reoccurrence upon rechallenge; and resolution of symptoms upon discontinuation of therapy (usually 2 weeks after therapy stopped).

Tendinitis with subsequent tendon rupture has been documented in numerous case reports. One patient with chronic renal failure developed bilateral Achilles tendon rupture after 4 days of ciprofloxacin therapy. Although renal transplant patients and those with end-stage renal disease tend to have an increased risk of Achilles tendinitis and rupture over the general population, quinolone use has been shown to further increase that risk (12% in quinolone-treated patients versus 7% in nonquinolone-treated patients).

As of October 1994, 25 cases of Achilles tendon rupture had been reported to the US FDA. Some ruptures have also occurred in the hand or shoulder. Other risk factors identified included age and corticosteroid use.

There had been 23 reports of tendinitis submitted to the Australian Adverse Drug Reactions Committee (ADRAC) between 2006 and 2008, including reports of Achilles tendinitis, tendon rupture, and tendon pain and swelling. The reports were primarily in male patients (15 cases) older than 56 years who used this drug for 2 to 14 days. In 19 of the reported cases, a fluoroquinolone (generally ciprofloxacin) was the primary suspect; however, details of concomitant serious medical conditions were not documented in most of the reports.

Myalgia, tendinitis, and tendon rupture have also been reported during postmarketing experience.

Vasculitis has also been reported during postmarketing experience.

Gait disturbance and elevated serum potassium have also been reported during postmarketing experience.

Quinolone class antibiotics have been associated with symptomatic hypoglycemia.

Quinolone class antibiotics have been associated with cataracts and multiple punctate lenticular opacities.

At least 2 cases have been reported of patients developing a cutaneous vasculitis related to use of this drug. The vasculitis resolved without medical intervention after the drug was discontinued.

Oral ciprofloxacin has been associated with a case of Jarisch-Herxheimer reaction (characterized by hypotension, tachycardia, and disseminated intravascular coagulation) in a 14-year-old female with tickborne relapsing fever.