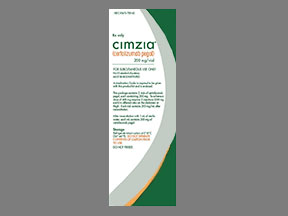 Cimzia (certolizumab)reduces the effects of a substance in the body that can cause inflammation. Cimzia is used to treat the symptoms of Crohn's disease after other treatments have failed. Cimzia is also used to treat rheumatoid arthritis, psoriatic arthritis, ankylosing spondylitis, plaque psoriasis, and non-radiographic axial spondyloarthritis. Cimzia affects your immune system. Serious and sometimes fatal infections may occur. Your risk of infection may be higher if you have Diabetes, HIV, a weak immune system, hepatitis B, chronic infections, if you use certain medications, or if you live in or travel to certain areas. Learn more

Note: This document contains side effect information about certolizumab. Some of the dosage forms listed on this page may not apply to the brand name Cimzia.

Common side effects of Cimzia include: infection and viral infection. Other side effects include: skin rash. See below for a comprehensive list of adverse effects.

Along with its needed effects, certolizumab (the active ingredient contained in Cimzia) may cause some unwanted effects. Although not all of these side effects may occur, if they do occur they may need medical attention.

Check with your doctor immediately if any of the following side effects occur while taking certolizumab:

Uncommon (0.1% to 1%): Hepatopathy (including cirrhosis), cholestasis

Rare (less than 0.1%): Reactivation of hepatitis B virus (HBV), including fatalities

Rare (less than 0.1%): Nephropathy (including nephritis)

Common (1% to 10%): Back pain, arthralgia, muscle spasms, pain in extremity