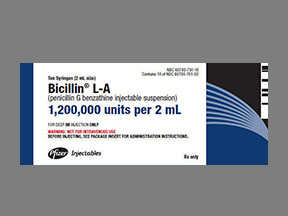 Prices and coupons of Bicillin l-a

Bicillin L-A is a slow-onset antibiotic that is used to treat many types of mild to moderate infections caused by bacteria, including strep infections or syphilis. This medicine is also used to prevent the symptoms of rheumatic fever. Bicillin L-A may also be used for purposes not listed in this medication guide. You should not be treated with Bicillin L-A if you are allergic to penicillin. You should not be treated with this medicine if you are allergic to penicillin. Tell your doctor if you have ever had: Learn more

What is Bicillin L-A?

Bicillin L-A is a slow-onset antibiotic that is used to treat many types of mild to moderate infections caused by bacteria, including strep infections or syphilis. This medicine is also used to prevent the symptoms of rheumatic fever.

Bicillin L-A may also be used for purposes not listed in this medication guide.

You should not be treated with Bicillin L-A if you are allergic to penicillin.

You should not be treated with this medicine if you are allergic to penicillin.

Tell your doctor if you are pregnant or breastfeeding.

How is Bicillin L-A given?

Bicillin L-A is injected into a muscle. A healthcare provider can teach you how to properly use the medication by yourself.

Read and carefully follow any Instructions for Use provided with your medicine. Ask your doctor or pharmacist if you don't understand all instructions.

Bicillin L-A must be injected slowly and deeply into a muscle of the buttock or hip.

Do not inject Bicillin L-A near or into an artery, vein, or nerve. Dangerous or fatal side effects could occur.

Prepare an injection only when you are ready to give it. Do not use if the medicine has changed colors or has particles in it. Call your pharmacist for new medicine.

Bicillin L-A is sometimes given as a single injection. In some cases you may need an injection once every 2 to 4 weeks, or once a week for only 3 weeks. How often you receive an injection will depend on the type of infection you have.

Be sure to receive all doses your doctor has prescribed, even if your symptoms quickly improve. Skipping doses can increase your risk of infection that is resistant to medication. Bicillin L-A will not treat a viral infection such as the flu or a common cold.

After you have finished all doses, your doctor may want to do tests to make sure your infection has completely cleared up.

Store in the refrigerator, do not freeze.

Call your doctor for instructions if you miss an appointment for your Bicillin L-A.

Overdose may cause a seizure.

What should I avoid while receiving Bicillin L-A?

Get emergency medical help if you have signs of an allergic reaction: hives; fever, chills, joint pain; difficult breathing; swelling of your face, lips, tongue, or throat.

Some side effects may occur if the medicine has been accidentally injected near a vein or nerve. Tell your doctor right away if you have:

What other drugs will affect Bicillin L-A?

Other drugs may affect Bicillin L-A, including prescription and over-the-counter medicines, vitamins, and herbal products. Tell your doctor about all your current medicines and any medicine you start or stop using.

Note: This document contains side effect information about penicillin g benzathine. Some of the dosage forms listed on this page may not apply to the brand name Bicillin L-A.

Severe reactions (including myoclonus, seizures, auditory and visual hallucinations, decreased mentation) have been reported with high-dose penicillin therapy or in patients with renal dysfunction. Severe neurologic reactions were most often seen with penicillin doses of 18 million to 80 million units daily. These reactions frequently abated after discontinuation of penicillin. In several cases, penicillin was restarted at a lower dose with no further sequelae. In 1 review, the authors found that cerebral spinal fluid (CSF) penicillin levels were higher in patients with seizures than in those without. CSF penicillin levels ranged from 12 to 61 units/mL in the seizure group with the highest CSF concentrations, compared to 7.8 units/mL in the group without seizures. Neurologic reactions occurred frequently in patients with renal dysfunction.

Onset of pseudomembranous colitis symptoms have been reported during or after antibacterial therapy.

A 28-year-old female developed jaundice, fever, epidermolysis, abnormal liver function tests, and cholestasis several days after receiving a single dose of penicillin IM. Her liver dysfunction continued for up to 18 months. She had taken acetaminophen concurrently but denied alcohol use.

Quadriceps femoris fibrosis and atrophy have been reported after repeated IM injections into the anterolateral thigh.

The Jarisch-Herxheimer reaction has been reported during syphilis treatment.