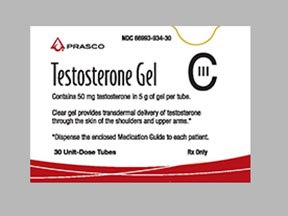 AndroGel contains Testosterone, a naturally occurring male hormone necessary for many processes in the body. It works by replacing or supplementing the Testosterone that is naturally made in the body. AndroGel is used to treat conditions in men that result from a lack of natural Testosterone. AndroGel will not enhance athletic performance and should not be used for this purpose. You should not use AndroGel if you have prostate cancer, male breast cancer, are pregnant, or are breastfeeding. Testosterone can cause birth defects in an unborn baby. A pregnant woman should avoid coming into contact with this medicine, or with a man's skin where the medicine has been applied. Learn more

How much is my Androgel co-pay with Medicare?

Ways to Save on Androgel

Here are some ways that may lower the cost of your androgel prescription.

AndroGel is used to treat conditions in men that result from a lack of natural testosterone.

AndroGel will not enhance athletic performance and should not be used for this purpose.

You should not use AndroGel if you have prostate cancer, male breast cancer, are pregnant, or are breastfeeding.

Testosterone can cause birth defects in an unborn baby. A pregnant woman should avoid coming into contact with this medicine, or with a man's skin where the medicine has been applied.

Topical testosterone is absorbed through the skin and can cause side effects or symptoms of male features in a child or woman who comes into contact with this medicine. Call your doctor if a person who has close contact with you develops enlarged genitals, premature pubic hair, increased libido, aggressive behavior, male-pattern baldness, excessive body hair growth, increased acne, irregular menstrual periods, or any signs of male characteristics.

Misuse of AndroGel can cause dangerous or irreversible effects. Never use more than your prescribed dose. Do not share this medicine with another person.

You should not use Androgel if you are allergic to testosterone patches or gels, or if you have;

To make sure AndroGel is safe for you, tell your doctor if you have ever had:

Older men who use AndroGel may have an increased risk of prostate enlargement or cancer. If you are over 65, talk with your doctor about your specific risk.

AndroGel should not be used by a woman. Testosterone can cause birth defects in an unborn baby. A pregnant woman should avoid coming into contact with testosterone gel, or with a man's skin areas where the gel has been applied. If contact does occur, wash with soap and water right away.

Do not use AndroGel on anyone younger than 18 years old.

How should I use AndroGel?

Use AndroGel exactly as it was prescribed by your doctor. Follow all directions on your prescription label. Do not use this medicine in larger or smaller amounts or for longer than prescribed.

This medicine comes with patient instructions for safe and effective use. Follow these directions carefully. Ask your doctor or pharmacist if you have any questions.

Apply AndroGel only to your shoulders, upper arms, and/or abdomen that will be covered by a short sleeve t-shirt. Wash your hands right away with soap and water after applying the gel. Keep the area covered until you have washed the application area well or have showered. If you expect to have skin-to-skin contact with another person, first wash the application area well with soap and water.

Do not apply AndroGel to your penis or scrotum.

Cover treated skin areas with clothing to keep from getting this medicine on other people. If someone else does come into contact with a treated skin area, they must wash the contact area right away with soap and water.

While using AndroGel, you may need frequent blood tests.

Use AndroGel regularly to get the most benefit. Get your prescription refilled before you run out of medicine completely.

What happens if I miss a dose of Androgel?

What happens if I overdose of Androgel?

What should I avoid while using AndroGel?

Do not apply this medicine to your penis or your scrotum.

Avoid swimming, bathing, or showering for 2 to 5 hours after applying testosterone gel. Follow the directions provided with your specific brand.

Testosterone gel may be flammable. Avoid using near open flame, and do not smoke until the gel has completely dried on your skin.

Get emergency medical help if you have any signs of an allergic reaction to Androgel: hives; difficulty breathing; swelling of your face, lips, tongue, or throat.

Stop using AndroGel and call your doctor at once if you have:

Topical testosterone is absorbed through the skin and can cause symptoms of male features in a woman or child who comes into contact with the medication. Call your doctor if your female partner has male-pattern baldness, excessive body hair growth, increased acne, irregular menstrual periods, or any other signs of male characteristics.

Common Androgel side effects may include:

What other drugs will affect AndroGel?

Tell your doctor about all your current medicines and any you start or stop using during your treatment with AndroGel, especially:

This list is not complete. Other drugs may interact with testosterone, including prescription and over-the-counter medicines, vitamins, and herbal products. Not all possible interactions are listed in this medication guide.

Remember, keep this and all other medicines out of the reach of children, never share your medicines with others, and AndroGel only for the indication prescribed.

Note: This document contains side effect information about testosterone. Some of the dosage forms listed on this page may not apply to the brand name AndroGel.

Along with its needed effects, testosterone (the active ingredient contained in AndroGel) may cause some unwanted effects. Although not all of these side effects may occur, if they do occur they may need medical attention.

The most frequently reported side effects with testosterone (the active ingredient contained in AndroGel) topical are skin reaction (16.1%) and allergic contact dermatitis (up to 37%).

Common (1% to 10%): Back pain, hemarthrosis (testosterone (the active ingredient contained in AndroGel) topical)