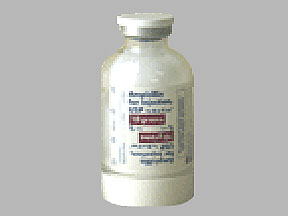 Ampicillin is a penicillin antibiotic that is used to treat or prevent many different types of infections such as bladder infections, pneumonia, gonorrhea, meningitis, or infections of the stomach or intestines. Ampicillin may also be used for purposes not listed in this medication guide. Follow all directions on your medicine label and package. Tell each of your healthcare prOviders about all your medical conditions, allergies, and all medicines you use. You should not use Ampicillin if you are allergic to Ampicillin or any similar antibiotic, such as Amoxicillin (Amoxil, Augmentin, Moxatag, and others), dicloxacillin, Nafcillin, or penicillin. Learn more

Ampicillin is a penicillin antibiotic that is used to treat or prevent many different types of infections such as bladder infections, pneumonia, gonorrhea, meningitis, or infections of the stomach or intestines.

Ampicillin may also be used for purposes not listed in this medication guide.

You should not use ampicillin if you are allergic to ampicillin or any similar antibiotic, such as amoxicillin (Amoxil, Augmentin, Moxatag, and others), dicloxacillin, nafcillin, or penicillin.

Tell your doctor if you are pregnant.

You should not breast-feed while using ampicillin.

How should I take ampicillin?

Take this medicine with a full glass of water.

Take ampicillin on an empty stomach, at least 30 minutes before or 2 hours after a meal.

Do not share this medicine with another person, even if they have the same symptoms you have.

If you are being treated for gonorrhea, your doctor may also have you tested for syphilis, another sexually transmitted disease.

If you use this medicine long-term, your kidney function, liver function, and blood cells may need to be checked.

Use this medicine for the full prescribed length of time, even if your symptoms quickly improve. Skipping doses can increase your risk of infection that is resistant to medication. Ampicillin will not treat a viral infection such as the flu or a common cold.

Very severe infections may need to be treated for several weeks.

Ampicillin can cause unusual results with certain medical tests. Tell any doctor who treats you that you are using ampicillin.

Store at room temperature away from moisture and heat. Keep the bottle tightly closed when not in use.

What happens if I miss a dose of Ampicillin sodium?

What should I avoid while taking ampicillin?

What other drugs will affect ampicillin?

Other drugs may affect ampicillin, including prescription and over-the-counter medicines, vitamins, and herbal products. Tell your doctor about all your current medicines and any medicine you start or stop using.

Commonly reported side effects of ampicillin include: eosinophilia and skin rash. See below for a comprehensive list of adverse effects.

Acute pancreatitis has been reported and confirmed by rechallenge with this drug in a patient in whom there was no other obvious cause of pancreatitis.

Common (1% to 10%): Swelling and pain, exanthema and enanthem in the oral region

Uncommon (0.1% to 1%): Infection with fungi/resistant bacteria (especially during prolonged and/or repeated use), drug fever

Neutropenia was described in a case report of 3 pediatric patients who received high doses (150 to 400 mg/kg) of this drug IV. In all 3 cases, white blood cell and neutrophil counts returned to normal after discontinuation of therapy.

Seizures have been reported with renal dysfunction or at very high IV doses.

Seizures have been reported in patients with high serum drug levels, although these patients were otherwise very ill. High cerebral spinal fluid (CSF) levels of some penicillins were known to be potentially neurotoxic, and the CSF level of this drug increased significantly in meningitis.

Generalized seizures have been described in 2 patients during use of this drug, although in both cases, there were underlying disease factors that may have predisposed the patients to seizure activity.

Mild, temporary elevation in AST reported in patients who received larger (2 to 4 times) and more frequent IM injections than usual. Evidence indicated AST was released at IM injection sites for this drug and increased AST did not necessarily indicate liver involvement.

Crystalluria has been reported with high-dose IV administration.