Home  ›  Blog  ›  Wellness  ›  Everything You Need to Know About Wormwood

Wormwood Intro | Active Ingredient | What does it treat | Scientifically Verified? | Side effects

Wormwood is a plant that has been used for thousands of years as a natural remedy.

Its name comes from the Anglo-Saxon word wermode and Old English wormoda, which both translate to "vermicide" or "worm killer."

In traditional medicine, wormwood's bitter taste has been used to flavor wines and spirits and as a preventative measure against lice, mites, and fleas for chickens.

Please continue reading to find the other uses of this herbal medicine.

Wormwood, also called Artemisia absinthium, grand wormwood, absinthe, and absinthe wormwood, is a type of plant that can be used for many different purposes.

It has been around since the time of ancient Greeks and Romans and has been used in folk medicine ever since.

Wormwood is a perennial shrub that can grow up to six feet tall with green leaves shaped like lances and it contains a high percentage of essential oil.

It is native to Europe and North Africa but is now grown in many other parts of the world and is considered naturalized in the USA and Canada.

Wormwood can be easily cultivated and has different cultivars or varieties that are made by selective breeding.

It is a common ingredient in certain alcoholic beverages including absinthe, bitters, and vermouth. 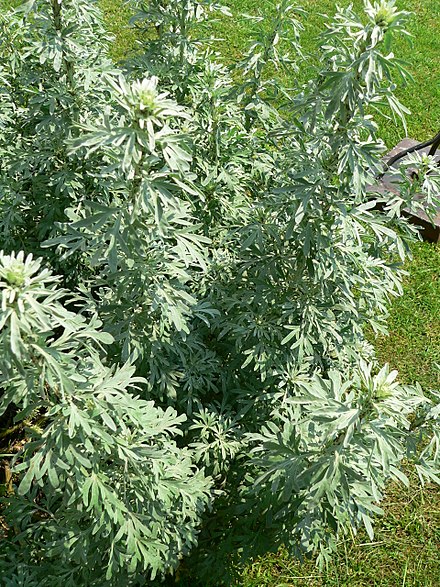 What is the active ingredient in wormwood?

The active ingredient in wormwood is called thujone, which gives it its distinctive smell.

Thujone is a chemical that has been shown to have toxic effects; albeit, in very large amounts for a lethal dose which can cause convulsions and even death.

It should be noted that there has only been one documented case of poisoning from wormwood, and that was a 31-year-old man who mistook wormwood oil for absinthe.

Despite the rumors, there have been no cases of toxicity due to ingesting absinthe.

Thujone works by stimulating your nervous system using the GABA receptors in the brain, which are responsible for calming activity.

This is why wormwood oil is thought to be helpful in treating anxiety and tension headaches.

What does wormwood treat?

Wormwood has been traditionally used for its curative effects on a number of different conditions.

Let's take a look at the most common benefits below.

Wormwood has been shown to be helpful in treating Crohn's disease, a type of inflammatory bowel disease (IBD).

The reason that wormwood is thought to be helpful in treating Crohn's disease is because of its ability to reduce inflammation.

Wormwood oil has been found to be helpful in reducing pain, both chronic and acute.

This is because the thujone content helps to stimulate the GABA receptors, which are responsible for inhibiting pain signals from the brain. For this reason, it is thought to help with osteoarthritis.

Wormwood is a carminative, which means it helps to relieve gas and bloating.

It is thought to do this by stimulating the production of gastric juices, which speeds up digestion and helps with digestive disorders.

It has been shown to be helpful in treating kidney disease. This is because it is believed to protect the kidneys from toxic substances by stimulating the production of enzymes that help filter oxygen out of the blood and remove toxins.

Early results of a study show that it helps reduce blood pressure in people suffering from IgA nephropathy.

Wormwood has been shown to have antioxidant properties, meaning it can help reduce free radical damage in the body.

Free radicals are produced when your cells convert food into energy and by breathing oxygen which can lead to oxidative stress.

Antioxidant activity stops these harmful substances from damaging healthy tissue inside your body which can possibly have anticancer and antiaging effects as well as helping with heart disease and Alzheimer's too.

As noted above with Crohn's disease, wormwood has been shown to be helpful in reducing inflammation.

This is thought to be due to the compound artemisinin, which has been shown to prevent your body from producing cytokines that lead to inflammation.

Wormwood oil has been shown to have antiparasitic activity by being effective in killing different types of parasites.

This is because the thujone content helps to stimulate the production of certain enzymes that are toxic to parasites.

Are any of these claims scientifically verified?

At this point, most of these claims come from anecdotal evidence so the effectiveness of wormwood is uncertain.

There have been some studies conducted on wormwood oil and its benefits, the problem is that many were done using a synthetic type of synthetic chemical thujone called "santonin."

The reason for this is that thujone is not approved by the FDA in certain countries (including Australia and the United States) for human consumption.

Until more peer-reviewed human studies are done none of these benefits can be claimed with any sort of certainty.

Please talk to your doctor or healthcare provider if you have questions about using wormwood.

What are the side effects of wormwood?

Wormwood without thujone has been shown to be relatively safe to both eat and drink and to apply to the skin.

Wormwood with thujone, however, has been shown to have some adverse side effects from the thujone content. Thujone can be toxic and even fatal in large amounts.

For this reason, wormwood with thujone should not be taken for health benefits.

When applied to the skin, wormwood can also cause an allergic reaction with redness and a burning sensation.

From around the web: what is wormwood.

Pregnant women and breastfeeding mothers should not take wormwood because it can be toxic to the baby.

Children under the age of 12 should also avoid taking wormwood because it has not been studied in this population and there is a risk for adverse effects.

People who have a history of epilepsy or are epileptic or suffer from seizure disorders should not take wormwood because it can trigger seizures.

If you have a kidney disorder, you should avoid taking wormwood because there is a possible risk of kidney failure. If you are allergic to plants, specifically ragweed or any other members of the Asteraceae, also known as the Compositae family of plants, you may have an allergic reaction to wormwood too.

If you suffer from the blood condition porphyria, you should not take wormwood as it might worsen conditions.

Wormwood oil is poisonous and should be kept away from pets, as they may lick themselves after getting into the oil.

If you have any further questions about who should or should not take wormwood, please talk to your doctor or healthcare provider.

How do I take wormwood?

Wormwood is available in many forms of extracts of wormwood including pills, tinctures, topical oils, and dried for use in a wormwood tea.

There are no dosage guidelines as none of these forms have been studied enough to give proper doses for wormwood.

Please ensure that you speak to your doctor or healthcare provider before taking wormwood in any form.

Where can I get wormwood?

Wormwood is available online and at many health food stores. It is also sometimes grown as a garden herb.

Check with your local store or grower to see if they have it in stock. If not, online retailers are a good option.

Wormwood is an aromatic plant that has been used as a spice and medicine for centuries. It is thought to be beneficial for many different things including osteoporosis, Crohn's disease, and alleviating inflammation among other conditions.

The active ingredient in wormwood, thujone, has been shown to be toxic and deadly in large amounts.

Wormwood should not be taken by pregnant women, breastfeeding mothers, children under 12, people with epilepsy or kidney disorders, those allergic to plants in the Asteraceae family, or those with porphyria.

It is available in many forms as a wormwood extract including pills, tinctures, topical oils, and dried for use in tea. If you think wormwood is right for you, please talk to your doctor or healthcare provider.