What Is Nystatin Cream Used For?

None of us like to think about it, but fungus is everywhere, and the potential for fungal infections is lurking around us constantly.

Fungal infections can be more than uncomfortable, however - they can be deadly. What may start as a simple yeast infection of the skin, known as candidiasis, can become a severe invasive infection within the bloodstream.

Yeast infections are the cause of more than 3.6 million U.S. healthcare visits each year, resulting in an estimated 3 billion dollars in direct medical costs, according to the Centers for Disease Control and Prevention (CDC).

Some species of fungus are becoming increasingly resistant to antifungal treatment because patients do not complete their recommended course of treatment, allowing the fungus to adapt and change to improve its immunity to the medication.

However, if caught early, most fungal infections of the skin can be treated with topical medications like nystatin cream and other similar drugs.

If you find yourself wondering what is nystatin cream used for, you may be surprised by the applications it has to a very common problem affecting infants and adults alike.

What Is Nystatin Cream?

Nystatin cream is a topical medication that belongs to a class of drugs called antifungals. Antifungal medications are used to kill a fungus that may be infecting the skin and to prevent the growth of the fungus.

It can be used on its own, but it is often combined with corticosteroid creams that are used for inflammation treatments.

When sold as nystatin topical cream, it is for use as an antifungal medication only.

Combination medications, such as nystatin and triamcinolone, are sold under brand names like Mycolog-II, Mytrex, and Quenalog. 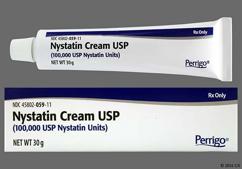 What Is Nystatin Cream Used For?

Nystatin cream is an antifungal medication that is used to treat certain fungal infections and conditions, including Candida (Monilia), or yeast infections.

It can also be used to treat diaper rash in infants.

Fungal infections, called mycosis, are caused by an infestation of fungus on the skin. Fungi can be found everywhere in our environment, including on household surfaces, in dirt, on plants, and on the skin.

Nystatin cream treats a type of fungal infection called cutaneous candidiasis, which is caused by yeast.

Yeast infections aren’t contagious, but they can be uncomfortable. They are most commonly found in warm areas of the body that are creased and are regularly moist, such as the armpits or groin.

People who are obese and have folds of skin that are difficult to clean may experience yeast infections within the folds.

People with diabetes and those taking antibiotics are also considered to be at a higher risk of yeast infection. Signs of a yeast infection on the skin include:

Yeast infections can also occur in the nail beds, in the mouth (called thrush), or in the vagina.

However, nystatin cream is only used for the treatment of yeast infections on the skin.

In some cases, fungal infections can become severe and become more serious.

You should seek medical attention if you notice any of the following symptoms in addition to those listed above:

Who Is Considered at Risk for a Fungal Infection?

Because we are always surrounded by fungus, anyone can get a fungal infection at any time.

However, fungal infections are most common in people with weakened immune systems or certain other characteristics. People considered at increased risk of a fungal infection include:

In addition to skin infections, fungi can also cause other types of illnesses, including asthma or allergies, lung infections, infections of the nail bed, bloodstream infections, meningitis, and more.

However, most fungal infections are minor in their early stages and can be treated effectively if caught early.

How Does Nystatin Cream Work?

In order to kill the fungal cells and stop the growth of new cells, medications like nystatin cream specifically attempt to destroy cellular structures and functions that are critical to fungal cells but not to human cells.

This way, fungal medications do not cause additional damage to your skin or other parts of the body.

Fungal medications commonly target the cell membrane and cell wall of the fungus, both of which are responsible for the protection of the cell.

Nystatin cream belongs to a specific subclass of antifungal medications called polyenes, which work by attacking the cell wall of the fungus to make it more porous.

Over time, the cells of the fungus burst and die.

How Much Does Nystatin Cream Cost?

Because nystatin cream is produced by a variety of manufacturers in both brand-name and generic forms and in a variety of strengths, it is relatively inexpensive.

A 15-gram tube of nystatin cream costs anywhere from 7 to 8 dollars, while a 30-gram tube would cost approximately 13 dollars.

It is covered by many insurance plans. Patients who have difficulty affording their prescriptions of nystatin cream may receive additional savings by using a pharmacy discount card like USA Rx, which offers savings on all brand name and generic FDA-approved medications at more than 60,000 participating pharmacies.

USA Rx is not insurance, and no personal information or medical history is needed besides your name and contact information.

Participants in the USA Rx pharmacy discount program pay a negotiated rate that USA Rx arranges which each drug manufacturer in order to offer the maximum possible discount without complicated paperwork, copays, or coverage limits.

What Are the Benefits of Nystatin Cream?

Nystatin cream is generally well tolerated by most patients, so there are many benefits associated with its use:

What Risks Are Associated With Nystatin Cream Use?

What Dose of Nystatin Cream Should I Use?

The dosage of nystatin cream recommended for use will vary depending on the patient and the severity of the infection.

No airtight bandages should be used to cover the treated area, but a sterile gauze dressing or bandage is ok.

The average length of treatment is between two to eight weeks and is determined by the severity and type of infection.

It is important that patients do not skip doses of their medication and wash their hands before and after use in order to prevent further fungal spread and increased resistance of the fungus to medication.

Approximately seven percent of bloodstream infections caused by yeast are resistant to antifungals, and one in four patients hospitalized with a bloodstream yeast infection dies of the infection.

Therefore, it is absolutely critical that patients apply their medication as directed, do not skip any doses, and continue their treatment until directed to stop by their doctor.

What Side Effects Are Associated With Nystatin Cream?

Very few side effects are associated with nystatin cream, and the medication is well tolerated by most people.

Skin irritation is the most common possible side effect associated with nystatin cream, and it usually does not require medical attention.

Patients should report adverse effects like skin irritation to their doctor or healthcare professional if it continues, gets worse, or becomes bothersome. Some people may experience mild itching.

Patients who experience severe burning, itching, rash, pain, or other serious side effects on the application site should discontinue the use of nystatin cream immediately and contact their healthcare professional.

Can Women Who Are Pregnant or Breastfeeding Use Nystatin Cream?

Nystatin cream is currently classified by the Food and Drug Administration as a Category C medication, meaning that it is not known whether the medication will harm an unborn baby.

Because the effects of nystatin cream on unborn babies are unknown, it is important that women who are pregnant or planning to become pregnant speak with their doctors before applying nystatin cream.

It is also unknown whether nystatin cream passes through breast milk and could affect a nursing infant. Women considering using nystatin cream should talk to their doctors before breastfeeding and using the cream.

Do Any Other Drugs Interact With Nystatin Cream?

Nystatin cream carries a low risk of interaction with other drugs taken orally or injected. However, it is important that you give your doctor a comprehensive list of all medications that you are currently taking, including prescription drugs, over the counter medications, vitamins, supplements, and herbal products.

You should not start a new medication without checking with your doctor first.

How Do I Know If Nystatin Cream Is Right for Me?

Nystatin cream is generally well-tolerated, but it is not right for everyone, including those patients who are allergic to the medication or its ingredients.

You should get medical advice from your healthcare provider about any prescription drugs, over-the-counter medications, supplements, or herbs that you are taking prior to using nystatin cream.

No studies have been conducted regarding the impacts of nystatin cream on pregnant or nursing mothers and their children, so patients should speak to their doctors if they are pregnant, planning to become pregnant, or nursing prior to using nystatin cream.

Nystatin cream must be applied multiple times per day consistently, and patients should not skip any doses or end their treatment early.

Doing so may cause the fungal infection to get worse, so patients should not use nystatin cream if they cannot commit to applying it appropriately.

View Printer Friendly Version
Tweet
5 out of 6 found this helpful.