Home  ›  Blog  ›  Wellness  ›  What Are Sea Lice? The Tiny Sea Critter That Could Ruin Your Vacation

What Are Sea Lice? The Tiny Sea Critter That Could Ruin Your Vacation

Imagine the sea louse as a tiny, sea-dwelling parasite that is the larvae of other sea life and can cause a painful bite.

Sea lice are so small they can go unnoticed until you come in contact with them.

If a sea louse bites a human, it can cause intense itching, which is often misdiagnosed as an allergic reaction to jellyfish stings or other ocean creatures. Here are some ways to identify, treat, and prevent sea lice bites.

What are sea lice?

There are numerous different species of sea lice that affect ocean creatures and they are all ectoparasites, meaning they are external parasites who feed on the mucus, skin, and blood of other marine animals.

These are NOT the ones we are going to be discussing because although these are sea lice, they are not the ones that bite humans.

The ones that bite humans are actually the larvae of thimble jellyfish and sea anemones.

Sea lice are tiny sea creatures that can ruin your vacation. Sea lice are animals that live in seawater and pose a risk to swimmers.

They cause an intense skin reaction that is similar to having poison ivy or a rash which is called seabather's eruption.

The sea lice that bite humans are known for their painful bites which can lead to itchy welts and infection.

Infections usually occur due to itchiness and scratching the affected area. These sea creatures are found in saltwater, including the ocean but also freshwater near beaches or coastal waters with high levels of pollution.

Sea lice have been on the rise over the past few years due to climate change and warmer sea temperatures, which makes sea lice more likely to thrive.

They are found in many different parts of the world that have a warm climate, including the coasts of Florida, South America, and Australia. 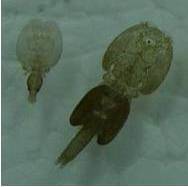 What are the symptoms of sea lice bites?

The symptoms of sea lice include red welts or bumps, called papules, around the bite area that later become raised blisters filled with pus and the red rash is commonly found in a line or curve.

The rash will typically last for a few days to a couple of weeks although a few days is the most common.

Seabather's eruption is the medical term for sea lice dermatitis, with dermatitis referring to an irritation on the skin.

The symptoms of red blotches are typically found in an area of skin exposed to seawater. The sea lice dermatitis may be accompanied by an itchy rash with no blisters or tiny blisters containing clear fluid or pus.

Other symptoms besides the rash include:

It is not common but if you are bitten enough you can also run the risk of a high fever, a symptom being especially prevalent in children.

If your fever becomes high enough we recommend that you seek medical attention.

What's the difference between a sea lice bite and a jellyfish sting?

Sea lice seabather's eruption has blisters that can contain pus, whereas jellyfish stings only have clear fluid blisters.

The most common sea lice are the larvae of the thimble jellyfish and anemones and when the currents and wind patterns change these creatures are brought closer to shore where they can interact with humans.

They are most common in the Atlantic Ocean, Caribbean, and the Gulf of Mexico.

They can be found in sea urchins, sea anemones, and coral reefs. Sea creatures such as sea stars, sea cucumbers, and sea sponges do not cause sea lice bites.

How do you treat sea lice?

Treating sea lice is fairly easy and straightforward and is similar to treating jellyfish stings.

Sea lice are so small they can get trapped inside your bathing suit so it is recommended that you not shower in freshwater after you leave the saltwater until you have taken your suit off and any other clothing you wore in the saltwater.

Once your suit is off, rinse it with fresh water and place it in the washer and run the washer with hot water to kill them.

You can treat sea lice bites with over-the-counter ointments like hydrocortisone cream and antihistamines to ease symptoms of sea lice dermatitis.

Apply the cream or use the antihistamines until the itching stops and the bumps go away. You can also take ibuprofen for swelling, pain, and inflammation.

There are a couple of do-it-yourself home remedies that you can apply to your sea lice bites, too.

These are similar to some of the methods used on jellyfish stings and include:

Both of these are believed to ease the itchiness and have been thought to make symptoms subside.

Something as simple as placing an ice pack, or ice in a towel on the affected area may have a soothing effect, too.

How do you prevent sea lice?

People have tried many methods to avoid sea lice but none seem to work due to their minuscule size. No matter the thickness of wetsuits or rashguards, people still get bitten.

The season typically runs from March through August and beaches most affected by sea lice seem to be where the Gulf Stream comes closest to shore.

Please pay attention to your local lifeguards when they have any announcements regarding sea lice outbreaks.

Also, remember to take off your bathing suit, rashguard, wetsuit, t-shirt, or any clothing you wore into the ocean or saltwater before rinsing in a freshwater bath or shower.

If you get bitten by sea lice, expect small red bumps called papules to appear for a few days to a couple of weeks. The red bumps can be itchy, but try not to scratch them as this can lead to infection.

Sea lice season runs from March through August and mostly affects areas along the Gulf Stream (Atlantic Ocean, Caribbean Ocean, and the Gulf of Mexico), especially where the Gulf Stream comes closest to shore.

Sea lice bites typically go away on their own, but should you become very itchy or need treatment there are several options available to you.

These include over-the-counter hydrocortisone creams, ice packs on the affected areas, and even vinegar or rubbing alcohol, along with others.

If your symptoms become worse, especially if you are running a fever, it is recommended you seek medical attention.

There is no way to prevent sea lice but pay attention to any announcements from your local lifeguards or beach patrol regarding outbreaks.