What Exactly is a Smelling Salt?

What exactly are smelling salts? People often ask this question and the answer may surprise you.

A smelling salt is a type of chemical compound that is typically stored in a container such as an ampule, capsule, or vial. It's used to treat fainting, dizziness, and unconsciousness caused by many different factors including head injuries.

Smelling salts work because they contain ammonia which stimulates the nervous system and clears out carbon dioxide from your lungs which can cause lightheadedness or fainting.

This article hopes to explain them further, their benefits, and any adverse effects they may have on you.

What are smelling salts?

They are still widely used today by athletes, medical practitioners and have many other practical applications as well.

Smelling salts are also commonly referred to as smelling bottles, ammonia ampules, an ampule being a small glass vial containing a concentrated solution of ammonium carbonate in water, or ammonia inhalants.

Ammonium carbonate is a salt that's made up of ammonia and carbonic acid.

Smelling salts are a chemical compound that is used to temporarily revive people who have fainted or those who have been made unconscious for various reasons, including head trauma from sports.

They are usually found in small vials and can be inhaled through the nose.

They typically look like round smelling salts capsules and come in a container that has a small opening at the end. The typical smelling salt capsule contains about one ounce of smelling salts. 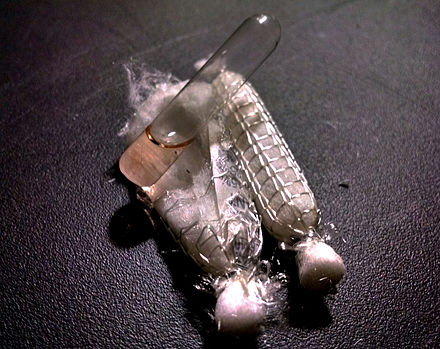 How do smelling salts work?

Smelling salts are used when someone is suffering from low blood pressure, the person had fainted, or an unconscious person.

They work by smelling the ammonia gas created by the capsule, which stimulates your inhalation reflex and can help to improve oxygen flow in your body.

When you smell smelling salts' ammonia fumes, it will cause a sudden inhalation that triggers an increase of carbon dioxide levels in your lungs. This action will restore normal breathing reflex function.

Smelling salts are widely used by athletes to keep them going during strenuous physical activity or exercise since smelling salts help many people with catching their breath and clearing the mind of distractions before continuing on in sports or other activities that require intense concentration.

What are the benefits of using smelling salts?

The main benefit and use of smelling salts are to wake up someone unconscious, whether through fainting or physical trauma.

This is the only scientifically proven function of smelling salts. However, other athletes have been using them for years for some of their supposed, and we might add unproven, benefits for their athletic performance.

All the benefits mentioned below in this section are based on anecdotal evidence and have no basis in science yet.

There are many other supposed benefits to smelling salts including their ability to increase alertness, improve moods, reduce anxiety, stimulate circulation, relieve headaches and migraines, prevent nausea and vomiting due to motion sickness or morning sickness during pregnancy.

Smelling salts are thought to be a powerful tool in the gym bag of any athlete by those who believe in their other effects besides waking unconscious people.

They can be used for multiple purposes, including increasing blood flow to the brain and muscles before exercising or sports activity.

This is supposed to increase energy levels allowing athletes to maximize their workouts with additional stamina resulting in reduced fatigue which thereby reduces the risk of injury while working out at high intensity.

Smelling salts can also be used to stimulate smelling senses, which will heighten your awareness of the surroundings.

Some people may find it useful for relieving stress or depression by inhaling smelling salts on a regular basis as this action stimulates brain functions that are responsible for controlling emotions and moods.

Are there any negative side effects to smelling salts?

The use of smelling salt is not without risks or dangers that range from mild irritation to even more serious health problems such as lung disease, asthma attacks, respiratory failure, and cardiovascular damage.

They can also cause damage to your nasal passages and even loss of smelling ability if misused or abused.

Smelling salts are considered safe for use under medical supervision but should never be used by people with asthma, since smelling salt inhalation may trigger an attack in sensitive individuals.

Can there be any long-term effects from using smelling salts?

There are no long-term effects of smelling salts, but they should only be used when necessary.

Smelling salts can cause serious damage to your body if misused or abused.

Exercise caution when reviving anyone out of unconsciousness who has a head, neck, or spine injury. Using smelling salts this way may cause them to move suddenly which could result in further injury.

It should also be noted that the use of smelling salts on concussed patients may temporarily mask certain conditions which will make it difficult for a doctor or medical professional to give an accurate assessment of the patient's condition.

Smelling salts are used to quickly restore normal breathing function in someone who has fainted or is unconscious for various reasons, as well as increase alertness levels of athletes before strenuous exercise.

There are many benefits attributed to smelling salts but some negative effects include reinjuring or exacerbating already existing head or neck trauma from the patient jerking their head and neck when waking up from being unconscious and smelling salts triggering an asthma attack in those with breathing sensitivities.

It can also worsen or trigger symptoms from those who already suffer from preexisting respiratory conditions.

There are many other supposed benefits to smelling salts including increased energy, increased awareness of surroundings, reduced stress or depression.

Other unproven benefits include an increased blood flow to the brain and muscles before exercising or sports activity which increases stamina resulting in less fatigue leading to injury prevention while working out at higher intensity.

Smelling salts can also be used to stimulate smelling senses which are thought to heighten awareness of the surroundings.

Some people may find it useful for relieving stress or depression by inhaling smelling salts on a regular basis as this action stimulates brain functions that control emotions and moods.

Please talk to your doctor, pharmacist, or medical provider should you have any other questions.