Shungite Stones: All You Need to Know

Shungite 101 | Different Types | How are they formed? | Health Benefits | Should I Use?

Shungite stones are a type of rock that is mined from the earth.

They are known for their therapeutic properties and have been used for centuries to help heal the human body.

Shungite crystals can be found in different shapes, sizes, and colors.

This article will answer all your questions about these unique healing crystals so you can decide if they're right for you.

What are shungite stones?

Shungite, also called black shales or black coal is a mineral that can be found primarily as a raw material in Siberia and is named after a place called Shunga where the first shungite samples were recovered.

There are many claims about its powers and has been said to be the most powerful mineral on earth. It was even used by Russian Czar Nicolas II for its medicinal properties.

Shungite minerals are black rocks that you can find in many shapes, sizes, and patterns.

Most notably, these stones are considered to have natural absorption properties of electromagnetic radiation; this includes high-frequency waves like microwaves which is why it has been linked with health benefits although none of this has been scientifically verified.

Shungite stones are a natural rock that has one primary natural source: Karelia, Russia, which is a region between Finland and Russia.

The shungite stone itself has been used for centuries and was thought to have magical powers against evil spirits and could even protect the wearer from black magic.

People still believe in the supposed amazing powers used by our ancestors and we can still enjoy the benefits of shungite stones. 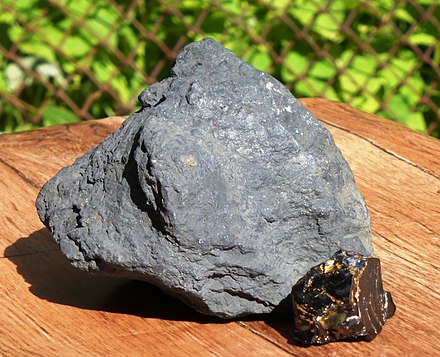 What are the different types of shungite stones?

According to many people, they wrongly believe that there are three different types of shungite stones and they are elite or noble shungite, Petrovsky shungite, and regular or raw shungite.

These classifications are all based on the amount of carbon in the stone.

It should be noted that the percent carbon listed in various sources are rough estimates as there is no definitive authority that is setting the standard for this classification system.

In reality, there is a system in place for rating shungite rocks based on their carbon content and they are ranked from 1-5, with 1 being the form with the most carbon. Shungite-1 has an over 98% while shungite-2 is in the 35-80% range.

How are shungite stones formed?

Shungites are formed as a result of the cooling and solidification process of a black or dark gray, organic, carbonaceous material.

They are formed over thousands of years by layers upon layers of organic carbon such as plants, animals, and microbes being compressed together with volcanic ash to create this stone.

Shungite is formed in the area with ultra-high pressure from rocks that have been crushed deep within the earth’s crust under temperatures reaching up to 700°C, or almost 1300°F.

Shungite is a naturally occurring ore that contains fullerenes, also known as buckyballs because they resemble small spheres.

What are the health benefits of shungite stones?

There are a number of reported health benefits for shungite stones but it should be noted that none of these are scientifically verified.

It has been claimed that shungite stones have been known to help with a number of conditions and ailments.

Some benefits include regulating the immune system, reducing inflammation, strengthening bones and teeth while also preventing them from decaying or becoming brittle, purifying water naturally by removing heavy metals such as lead and cadmium that pollute it when mined for industrial purposes in factories, and many more.

Using shungite stones falls under the umbrella of complementary medicine or alternative medicine.

That being said, there are a number of unverified health benefits people claim to receive from shungite stones.

The most common being:

This last point is an increasingly popular opinion today as it is claimed that shungite can protect you from 5g waves and devices.

None of these are proven facts but many claim the beneficial properties of this stone have worked for them. Should I use shungite stones?

Shungite stones are safe for anyone to use.

That being said, people who suffer from severe allergies or sensitive skin may want to avoid using the black type of shungite stone because it can irritate their skin when in direct contact with them.

It is also important to note that shungite stones are not to be used as a primary medicine.

As we stated above, shungite stones fall under complementary medicine meaning that it is used alongside conventional medicine.

For example, if you are receiving chemotherapy treatments for cancer you should not stop these treatments to rely on the unverified health benefits of shungite stones.

Please continue your normal treatment options while adding this one if you believe it can help you.

Shungite stones are a type of rock that was originally found in only one region of Siberia, Russia.

They have been thought to have healing or protective powers for centuries although none of this is scientifically verified.

The rocks were formed over thousands of years using pressure and organic matter that eventually turned into carbon.

They are rumored to have a slew of health benefits ranging from protection from microwaves and 5g waves to purifying water.

These stones have not been proven to have little to no benefits in scientific studies yet so it is important to only use them in a complementary way not as your primary treatment.