Sea moss, also called Chondrus crispus, is a type of algae that is found on rocks around saltwater.

It has been used for centuries as a food source, and more recently, it has become popular as a natural remedy for various health problems.

Sea moss is high in nutrients, including protein, fiber, vitamins, and essential minerals.

It also contains antioxidants and other compounds that offer health benefits.

In this article, we will explore the uses, nutrients, health claims, and benefits of sea moss.

What is sea moss?

Sea moss, also called Irish moss or carrageen moss, is a type of seaweed algae that grows on rocks in either an intertidal zone or a subtidal zone.

This means it is submerged part of the time and exposed to the air at other times.

It has been used for centuries as a food source and medicinal herb. It is technically not an animal, plant, or fungus as it is a protist.

This means it is a single-celled organism that does not have a true nucleus. It is a small species of red algae that can grow up to 8 inches long and have several branches that are fan-like, resembling some fan corals.

Sea moss is high in nutrients, including protein, vitamins, minerals, and antioxidants.

It has a variety of health benefits, including helping your heart, thyroids, and even promoting weight loss. 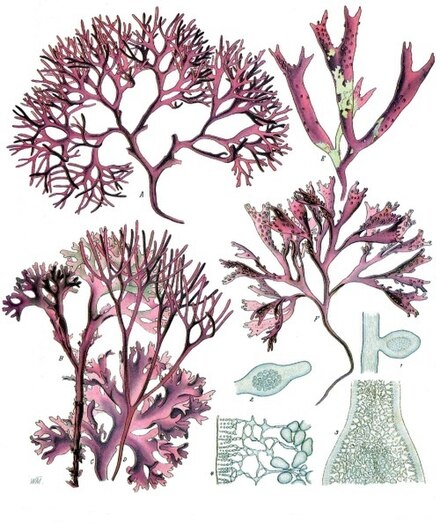 What are the uses of sea moss?

Sea moss is used as a food source and as a medicinal herb. It can be eaten fresh or dried.

The dried sea moss can be added to soups, stews, smoothies, or other recipes. It has a slightly salty taste and is sometimes chewed like gum.

Sea moss is also available in capsule form or as an extract. Commercially it is also used as a thickening agent called carrageenan.

It is the lone natural source for it and it is often used in ice cream, yogurt, cream, ricotta cheese, and now in many vegetarian foods too as a natural alternative to gelatin.

What are the nutrients in sea moss?

Sea moss is high in nutrients including vitamins, minerals, and antioxidants, and even has a little bit of protein.

Below is a table listing of the nutrients in sea moss according to the USDA.

As you can see, sea moss is high in B vitamins, iron, magnesium, manganese, phosphorus, and zinc while providing a little protein and very little fat.

From around the web: Sea moss benefits, What is sea moss

What are the health benefits of sea moss?

Sea moss has been used for centuries and there are many sea moss benefits.

Below is a table listing some of the potential health benefits of sea moss.

Sea moss is a probiotic that helps improve gut health. It contains beneficial bacteria and also fiber, both of which help to promote gut health.

It is also high in magnesium, which can help to lower blood pressure and keep the heart healthy. There have also been studies that reveal it helps lower LDL, or the bad cholesterol in your body.

Sea moss contains fiber which also helps you feel full among its other benefits. This means you can eat less and stay full longer than other foods lower in fiber.

Along with the other benefits, sea moss may also boost immune health. It does this by improving the immune modulation and immune response, but it has only been studied in fish to date.

It does this due to it being a great source of iodine which is needed to help your thyroid function properly.

This is purely anecdotal and has not been studied but some people have been using it to help with their fertility as a potential benefit. Peer-reviewed studies on humans need to be done before this can be stated as a fact.

There have been two studies that show sea moss can help with blood sugar management.

The other study was done on pigs and showed that a substance called alginate helped to prevent blood sugar spikes.

Although there have been studies, many more need to be done to verify all the benefits. Some of these benefits are anecdotal while others haven't had enough studies done on humans or have only had animal studies.

Are there any adverse side effects to sea moss?

So far, there are no known adverse side effects to sea moss. Due to its high iodine content which, when consumed in large quantities, can cause hypothyroidism.

This can cause your thyroid to not function properly. Due to sea moss being submerged in ocean waters, you could also be exposing yourself to heavy metals but it would only be toxic in very large doses at high levels.

Lastly, the taste and texture may not be pleasant to some people's personal preferences. When eaten raw, sea moss has a taste similar to raw clams or oysters which can be offputting for some people.

Its texture can also be similar to a sea moss gel which you may not like. As with any herb or supplement, it is always best to speak with a healthcare professional before starting to take sea moss if you are pregnant, breastfeeding, have a medical condition, or are taking medication.

How do you take sea moss?

There are many ways to take sea moss and it can be eaten raw or dried. When it isn't raw, it is typically available as a capsule, powder, or gel form.

The most common is to either drink it in a juice or smoothie, add it to food, or take it as a supplement in pill form. You can also find sea moss in tea form but this is not as common.

If you are taking sea moss for the first time, start with a small dose and work your way up as you get used to the taste and texture.

Speak with a healthcare professional before taking sea moss if you are pregnant, breastfeeding, have a medical condition, or are taking medication.

Sea moss is a type of algae that has many benefits for your health. It is high in nutrients, including magnesium and iodine, and could possibly help with weight loss, fertility, blood sugar management, and more.

So far, there are no known adverse side effects to sea moss but it is always best to speak with a healthcare professional before starting to take sea moss if you are pregnant, breastfeeding, have a medical condition, or are taking medication.

Due to its high levels of iodine, there may be a risk for iodine toxicity.

There also may be a risk for heavy metals since it is submerged in the ocean part of the time although the risk will vary depending on how polluted the ocean is where it is grown.

There are many ways to take sea moss and it can be eaten raw or dried. When it isn't raw, it is typically available as a capsule, gel, or powder.