What is the Perineum?

The perineum is a region of the body located between the anus and the scrotum in males, and between the anus and the vulva in females. The perineum is made up of several muscles, including the levator ani muscle, bulbocavernosus muscle, and ischiocavernosus muscle among others. A variety of medical conditions can affect your perineum, such as pelvic floor dysfunction and childbirth. In this article, we will discuss all you need to know about the perineum and the causes of the medical conditions that can affect it.

What is the perineum?

The perineum is the region of your body that both males and females have between your legs that forms a diamond-shaped area between the anus and the genitals, the vulva in females, and the scrotum in males. It lies between the pubic arch, also called the pubic symphysis, and the tailbone, which is also called the coccyx. A ridge of skin is also visible on the perineum that runs the length of it from the genitals to the anus, called the perineal raphe. The region can be an erogenous zone for both males and females, which means that it can be sexually pleasurable to stimulate. The perineum is near the perineal nerve, which is a branch of the pudendal nerve which innervates, or provides nerves to the perineum and produces sensation. 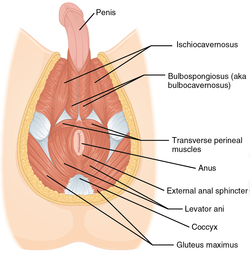 What muscles are a part of the perineum?

The gluteus maximus is another name for your buttocks and these are the muscles that form it.

The levator ani muscle is a large, triangular, group of muscles that supports the organs in the pelvic cavity. It surrounds the anus and the perineal body, which is a ligament located in the perineum that supports the pelvic muscles and helps to prevent the prolapse of these organs. It is the muscles that contract during orgasm and during vaginismus, which is the involuntary contraction of these muscles during vaginal intercourse that can cause unwanted pain.

The urogenital triangle is the front half, or anterior half, of the perineum and contains the vagina in females but ends at the scrotum in males. It contains several muscles including:

The superficial transverse perineal muscle is a thin, sheet-like muscle that lies horizontally across the perineum. It helps to support the perineal body and the pelvic organs and aids in the expulsion of semen in males and is the muscle you flex to squeeze out the last drops of urine in both sexes.

The ischiocavernosus muscle is a diamond-shaped muscle just below the surface of the perineum. Its function in males is to compress the veins of the penis, which helps to maintain an erection by trapping blood in the penis and stabilizing it while erect. In females, its function is to tense during orgasm.

The bulbospongiosus muscle is a triangular muscle located in the middle of the perineum. In males, it runs the length of the middle of the perineum to the base of the penis and surrounds the spongy urethra where its main function is to contract during orgasm to help keep the urethra open during ejaculation and to push semen out of the penis. In females, both sides of this muscle do not meet in the middle as it is separated by the vagina. The function of this muscle in females is to help with a clitoral erection as it contracts during orgasm and helps to close the vagina.

What medical conditions affect the perineum for both males and females?

The pudendal nerve is a nerve that originates in the lower back and runs down through the perineum to the genitals. If this nerve is compressed or trapped, it can cause pain in the perineum.

Interstitial cystitis, also called painful bladder syndrome, is a condition that causes inflammation and pain in the bladder and perineum. Symptoms can include frequent urination, pelvic pain, and pain during sexual intercourse.

An abscess is a collection of pus that is usually caused by an infection. Abscesses can form in any part of the body, but they are commonly found in the perineum.

What medical conditions affect the perineum for males?

There is one medical condition that can affect the perineum in males which is the following:

Prostatitis is an infection or inflammation of the prostate gland. The prostate is a small, walnut-sized gland located just below the bladder that helps to produce semen. Prostatitis can cause pain in the perineum, difficulty urinating, and pain while ejaculating.

What medical conditions affect the perineum for females?

There are medical conditions that are specific to the female perineum too and these include:

Childbirth is a natural process that occurs when a baby is born and it can be an extremely physically and emotionally demanding experience for the mother. Childbirth by vaginal delivery can cause perineal tearing, which is when your perineum tears or stretches during labor and delivery of the baby from the birth canal. A perineum laceration can range from a small tear to a large laceration that goes all the way through the perineum to the anus. Please note that this is normal during vaginal delivery but should not happen during cesarean delivery (C-section).

Vulvodynia is a condition that causes pain in your vulva, which is the external tissue around the vagina. The pain can be burning, stinging, throbbing, or aching and it can occur at any time, sometimes it is only felt when your vulva is touched or irritated which can cause pain during sex.

The perineum is a sensitive area located between the legs that can be affected by a variety of medical conditions. These conditions can cause pain in the perineum, difficulty controlling your bladder and bowels, and even prolapse of the pelvic organs. If you are experiencing any symptoms related to these conditions, it is important to seek medical help. If you have any more questions concerning the perineum, please talk to your doctor or health care provider for medical advice.