Nummular Eczema: The Facts and Tips for Prevention

What is nummular eczema? | Causes | Who gets it? | Symptoms | Diagnosis | Treatments | Prevention

The name nummular comes from the Latin word "nummus" meaning coin because nummular shapes are similar to coins.

Nummular eczema is a type of eczema that can affect people of all ages and both sexes but it is most common in adults.

In this article, we will explain the symptoms and how to prevent this skin condition.

What is nummular eczema?

Nummular eczema, also known as nummular dermatitis or discoid eczema, is a skin condition that appears on the surface of your skin in coin-shaped patches.

The most common areas for nummular eczema to appear are the upper arms and lower legs although it can also appear on your face, torso, limbs, and hands.

It can also occur on other parts of the body such as the back and scalp.

These nummular eczema patches are itchy and often cause redness or irritation and usually occur in clusters.

Nummular eczema can be chronic or relapsing and remitting, which means it comes back over time.

Nummular eczema also has a tendency to go through phases of being active, meaning there is a flare-up, with periods where the nummular rash goes away only to return again at a later time.

The nummular rash, which is also referred to as discoid dermatitis or nummular eczema, can affect any part of the body including the folds, which are the armpits and groin area, where skin touches skin.

However, nummular eczema never appears on mucous membranes such as inside your mouth or nose.

Osmosis -What is atopic dermatitis? Atopic dermatitis, also known as eczema, is a type of skin rash that's most common among children, but can also happen in adults.

Nummular eczema is a type of dermatitis or inflammation that causes red, itchy patches on your skin. Its cause is unknown but is believed nummular dermatitis is often brought on by external factors such as harsh soaps or skin irritants.

There seem to be genetic links to being prone to nummular eczema as people with family histories of atopic dermatitis, asthma, and allergies are more likely to suffer from it.

Nummular dermatitis can also be caused by internal factors like emotional stress.

While nummular dermatitis can occur on any part of the body, it most often appears in areas where there is sensitive skin and where it tends to fold or crease such as the armpits and groin area.

One study showed that it is more common during pregnancy and in menopausal women, although nummular eczema can appear at any age.

Who can get nummular eczema?

Almost anyone at any age is susceptible to nummular dermatitis, but it does tend to appear more often in adults.

Nummular eczema in children is rare.

In addition, nummular eczema tends to run in families so there appears to be a genetic link as well.

What are the symptoms of nummular eczema?

The nummular rash is a raised, inflamed patch or coin-shaped lesion that appears on the surface of your skin.

It can itch or burn and there will be dry skin which is scaly with redness around it.

These annular lesions, meaning circular, can also ooze fluid like pus, which is typically clear or white in color.

When nummular eczema appears on the folds of your skin, it can cause irritated skin and chafing, which is why nummular dermatitis in the armpits or groin area can worsen eczema outbreaks.

Skin discoloration is not common with nummular eczema, but it may appear in certain cases.

When should I see a doctor?

If nummular eczema is not treated, the rash will continue to get worse. It can be very itchy and sometimes nummular dermatitis causes pain or bleeding when you touch the affected area of skin.

Nummular eczema may also cause your inflamed skin to peel or look like a burn because of excessive scratching.

Untreated nummular eczema rashes can also lead to a secondary infection like a bacterial infection.

Please see your healthcare provider or dermatologist if you believe you are suffering from nummular eczema. 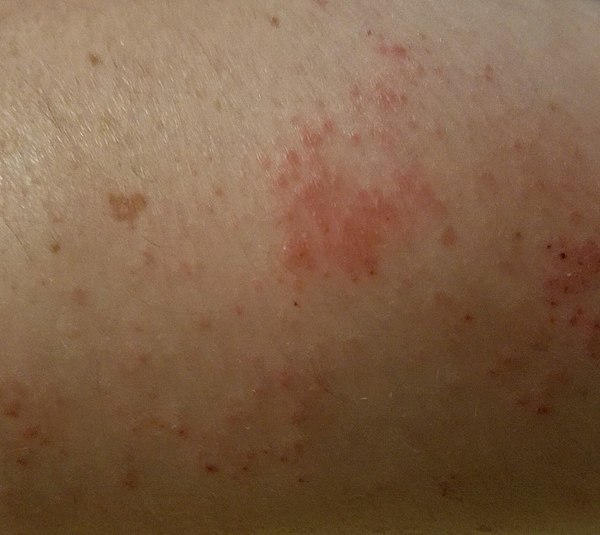 How do dermatologists diagnose nummular eczema?

You should see a doctor or dermatologist if nummular eczema is not getting better or if you are experiencing any of the symptoms listed above.

To make a diagnosis of nummular eczema, your doctor may ask you questions about your medical history and take a look at your skin to identify any nummular rashes.

Your doctor will be able to diagnose nummular dermatitis by looking at your rash and asking questions about your medical history, past outbreaks, other skin conditions you have had in the past, allergies that affect your immune system, medications you are taking, and any other environmental factors that may be causing nummular dermatitis.

To confirm the nummular diagnosis, your dermatologist may perform a skin biopsy, which means there is an examination of skin scrapings under a microscope to determine the diagnosis, on nummular eczema patches to rule out other possible causes of nummular rash.

What are some common treatments for nummular eczema?

The best way to treat nummular eczema is with prescription topical corticosteroid medications, which are anti-inflammatory drugs.

These treatments can be taken in the form of a cream or ointment to apply on nummular rash patches and will take about two weeks before the nummular eruptions begin to disappear.

In addition, your doctor may also prescribe medicated antihistamine tablets to help with your symptoms.

Is there a cure for nummular eczema?

Unfortunately, nummular eczema is not curable. However, this inflammatory skin condition can be treated to prevent outbreaks from occurring and reduce the severity of nummular eruptions when they  flare-up again.

How can you prevent nummular eczema?

The best way to treat nummular eczema is by preventing outbreaks from happening in the first place.

The National Eczema Association (NEA) suggests avoiding triggers that cause inflammation, such as household cleaners, harsh soaps, hot water, stress, and irritating fabrics. If nummular dermatitis is caused by an allergen or irritant, avoiding it will help to prevent nummular outbreaks including using fragrance-free detergents for your clothes and bedding.

If you are uncertain whether something is an irritant, it's best to do patch testing. For example, when staying in a hotel you rub the sheets and bedding on a small portion of your arm and wait a few hours to see if you suffer from a contact allergy.

It’s also important for those with nummular dermatitis to avoid scratching your rash patches because that can lead to bacterial infections.

Furthermore, nummular eczema is often painful and rash patches are frequently itchy. Applying eczema treatment creams or ointments can also help nummular eruptions from itching which will prevent you from scratching the area to relieve itchiness.

Nummular dermatitis is a condition that can be a chronic condition and relapsing but there are treatment options available for those who suffer from eczema.

Proper skin care is key to avoiding eruptions and controlling nummular dermatitis and this includes moisturizing nummular rashes up to three times a day.

Currently there are no prescription medications approved by the U.S. Food and Drug Administration (FDA) to treat nummular dermatitis.

However several treatments are available over the counter (OTC) including creams, lotions, and moisturizers which can be found at your local pharmacy or drugstore.

Nummular eczema is one of the kinds of dermatitis which appears as a rash on the arms, legs, neck, and trunk and that has no known cause but the symptoms are exacerbated by allergens and irritants.

It can occur in anyone, however, it most frequently occurs in adults and people with a family history of atopic eczema, asthma, and allergic contact dermatitis.

There are treatments available in the form of creams and ointments but nummular dermatitis is not curable.

Preventing nummular eruptions from occurring will be the most effective treatment. To prevent nummular dermatitis, you should avoid triggers that cause inflammation and allergens or irritants if it is caused by them.

Furthermore, nummular eruptions are often painful and the rash patches are frequently itchy. Nummular dermatitis sufferers should also regularly moisturize any affected areas with creams or ointments that are fragrance-free.

Should you have any more questions regarding nummular dermatitis, please consult your dermatologist or healthcare professional about proper treatment.