If you're a woman, nipples are a part of your anatomy that can't be ignored. They provide milk for your baby and they have to look good in order for breastfeeding to work out well. If you're a man, nipples serve an entirely different function, that being sexual arousal. In this article, we'll discuss nipples from all angles so that you know what's going on with yours and what problems might arise if something is wrong.

Nipples are the small bumps that stick out from the chest on both men and women. They are used to feed babies milk from the breast and are made up of different parts that have different functions. In mammals, when not on a human, they are called teats.

What are the different parts of the nipple?

The nipples are actually made up of several different parts that have various functions. These include:

What are the nipples used for in women? 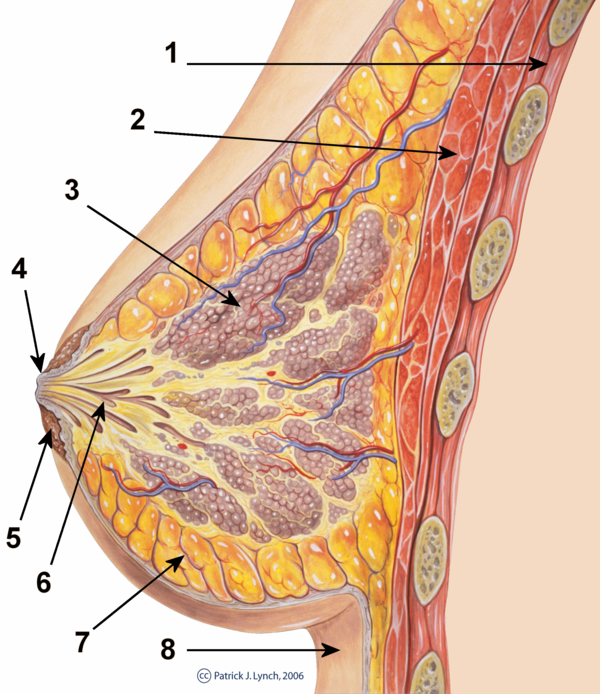 The breast: cross-section scheme of the mammary gland:

The female nipple can also be used as a sexual organ. The nipples can be stimulated during sex which can cause sexual arousal in both men and women. It is also possible for nipples to be stimulated with clothes on.

What are nipples used for in men?

In men, nipples do not really have a function because they don't use their nipples to breastfeed babies. Men, just like women, can use their nipples for pleasure during sexual activity. This is called nipple play. They can still be very sensitive and it is possible that nipple stimulation could cause sexual excitement but this does not always happen with everyone. In men, they contain the mammary gland tissue and milk ducts which can help to develop breasts during puberty if stimulated by hormones such as estrogen or progesterone. If nipples on a male continue growing after puberty it is usually harmless and not cancerous. It is thought that men still have nipples because there is no evolutionary advantage gained by losing them, this is also called spandrel.

What are the different types of nipples?

It should be noted that men and women can have two different kinds of nipples at the same time so both nipples do not have to be the same.

What problems can happen to your nipples while breastfeeding?

Women nipple pain is most often caused by continued breastfeeding. While breastfeeding, you can get chafed or sore nipples. The nipples are made of very sensitive skin and it is easy to damage them during the first few weeks as they adjust to being used for feeding a baby. When nipples become engorged with breast milk this can also cause pain but not much else because there isn't anything that you could do about it. There are other problems that nipples can have such as being cracked, dry, bleeding, or scabbing which can lead to discomfort and nipple pain. If any of these symptoms of nipple soreness persist for more than a few days, then it is best to consult with a doctor to see what could be wrong.

The baby may also not latch properly to the nipple, this can cause nipples to become sore, chafed, or cracked and is a common breastfeeding difficulty. When nipples are not latching properly it is usually because the baby has a shallow latch where they don't get very much nipple in their mouth and when the milk begins to flow they cannot control how fast it comes out so sometimes milk sprays everywhere instead of just coming out slowly as it should. If the baby has a shallow latch it is usually because they are not opening their mouth wide enough or they are tilting their head back which causes the nipple to go too far into their mouth. You can try a different breastfeeding technique for these issues and if the problems continue, you can see your health professional or a lactation consultant.

Are there any other problems that can happen to nipples?

Apart from breastfeeding problems, nipples can also have other problems such as cancerous lesions. If a lump is found on the nipple or skin around it then you should go immediately to see your doctor because this could be dangerous if left untreated for too long as it could be cancerous. Breast cancer is common in women and rare in men, although men can still get it. Nipples that are not properly formed during development in the womb can cause issues with breastfeeding and having inverted nipples make it difficult for the baby to latch on. It is possible that nipples can become inverted after breastfeeding as well if there is any damage done while feeding a child, but it should go back to normal within some time.

There are many different problems that nipples can have and it is important that you take note of them so that they don't get overlooked or worse, ignored. If any problems persist for more than a few days then it is best to consult with your doctor to see what could be wrong.

Nipples are the small protruding parts of the breast that are in the center of the areolas in humans. Nipples are used for breastfeeding in women and can cause sexual stimulation in both men and women. They can also have other problems such as cancerous lesions or being dry or cracked which can lead to painful nipples. There are four different types of nipples and you can have more than one type on your own body. If you are breastfeeding, your nipples may become, sore, chapped, chafed, or bleed among other problems. Also, your child may not be latching onto your nipple correctly which can cause a host of problems for the baby. You can also form lumps in your breast, which can be cancerous for both men and women although it is more prevalent in women, and you should see your doctor or health care provider should you find one. Thank you for reading our article, if you have more questions about nipples or breastfeeding we recommend talking to a medical professional.