Basic Facts About the Medulla Oblongata

What is the medulla oblongata? | Location | Functions | Diseases | Protection

The medulla oblongata is an area at the base of your brain that controls involuntary functions like breathing, heart rate, and blood pressure.

If you injure or damage your medulla oblongata, it may lead to serious health problems including difficulty breathing, high blood pressure, or even death.

What is the medulla oblongata?

The medulla oblongata is a portion of the brainstem that extends from the spinal cord to the upper end of the larynx, which also contains the vocal cords.

It's part of your nervous system and is responsible for regulating autonomic functions, or involuntary functions, like breathing, heart rate, blood pressure, and swallowing.

The medulla oblongata also regulates some voluntary functions like coughing and vomiting.

There are several different parts of the medulla oblongata including the medullary cone, pyramidal tract, also called the corticospinal tract or CST, and spinal nucleus of the trigeminal cranial nerve, including the olivary nuclei.

These structures help control involuntary reflexes like pain sensation from the face or mouth area and blood pressure regulation by constricting blood vessels to raise or lower blood pressure as needed.

The medullary cone also contains respiratory center neurons that control how fast or slow you breathe, as well as carbon dioxide elimination from your blood by exhaling air through your lungs.

Located below the medulla oblongata is a structure called the pyramids which contain sensory nerve cells responsible for pain sensation from the head, face, and mouth area.

Below that is a structure called the spinal nucleus of the trigeminal nerve which plays an important role in facial pain sensation because it processes fibers from three different cranial nerves—the ophthalmic branch of V-one, the maxillary branch of V-two, and mandibular branches of V-three.

It contains gray matter, nuclei, medullary rays, and white matter. It is located in the posterior cranial fossa of the skull underneath the cerebral hemispheres.

The medulla oblongata contains gray matter which allows for communication between neurons through synapses. It also contains medullary "rays" that are fiber tracts containing axons from neurons.

These medullary rays are responsible for the reflex actions mediated by the medulla oblongata to other parts of your brain and spinal cord, as well as communicating with motor neurons in order to control muscles like those used for breathing, heart rate regulation, swallowing, coughing, vomiting, or bowel movements along with signals from sensory receptors that respond to pain, temperature sensation, or pressure.

A list of the different nuclei in the medulla include: 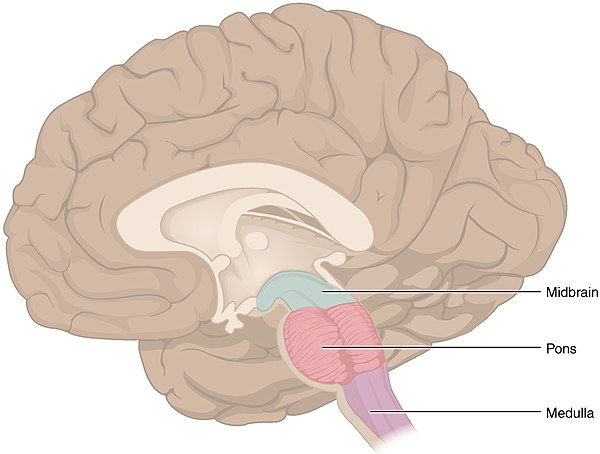 Where is the medulla oblongata located?

The medulla oblongata is often referred to as just medulla and is found at the base of your brain. It's between the pons and midbrain in what's known as your brainstem.

The spinal cord also extends from this part of the brain before it splits into section vertebrae and the spinal tract.

The other parts of the brain are the cerebrum, which is the largest part of the brain, and the forebrain.

The medulla oblongata is at the very bottom of your brain, which is why it's referred to as “oblong” in comparison to all other parts that are more spherical in shape.

The spinal trigeminal nucleus is a medullary nucleus that receives sensory information from the face and innervates muscles of mastication, facial expression, and corneal reflex.

It is located adjacent to where the medulla oblongata joins with the pons. The spinal trigeminal nucleus sends fibers via three cranial nerves: ophthalmic nerve (V-one), maxillary nerve (V-two), and mandibular nerve (V-three).

The medulla oblongata also contains the dorsal motor nucleus of the vagus nerve, or CN X, which is responsible for general visceral efferent fibers. The medullary reticular formation forms a thin layer covering its surface and it plays an important role in respiratory and cardiovascular control via medullary cardiovascular centers.

What does the medulla oblongata do?

As noted above, the medulla is responsible for regulating several important bodily functions. These include:

What happens if I hurt my medulla oblongata?

Injuries to the medulla can lead to serious health consequences like difficulty breathing, high blood pressure, and paralysis below the level of injury.

The medulla also sends nerves that control muscles in your face and mouth, called the trigeminal nerve, and muscles that control your voice, via the phrenic nerve.

If the medulla is injured, these nerves can become damaged or severed.

Other problems that may occur if your medulla is injured are respiratory problems like sleep apnea, cardiac issues like heart attacks or angina, which is chest pain due to lack of blood supply, respiratory failure, and neurogenic bladder. Neurogenic bladder occurs when the medulla is injured and can lead to urination without having had the urge or inability to hold it for more than a few seconds.

What diseases affect the medulla oblongata?

There are several health conditions that may involve the medulla including:

These are some of the different health problems that can affect your medulla, please consult your healthcare provider should you have any further questions.

Can I survive without my medulla oblongata?

No, the medulla is responsible for some of your most basic functions.

Without a medulla, you would not be able to breathe and blood flow may stop, which means no heartbeat. You could survive with medulla damage but chances are very slim since it controls so many vital functions like breathing and heart rate.

How can I protect my medulla oblongata?

There are several simple precautions you can take to avoid medulla damage, such as wearing seat belts when in a car and not driving if under the influence of drugs or alcohol.

If you are experiencing blurred vision, double vision, trouble swallowing or talking, weakness on one side of your body including face muscles, face drooping, balance issues with walking that may cause you to fall down, or dizziness that doesn't go away with medication then medulla damage should be suspected and medical attention is needed.

Keep in mind there are also several things you can do to prevent medulla injury such as:

The medulla oblongata is responsible for some of our most vital functions such as breathing, heart rate, and more.

The medulla is located in the brain stem and is part of the central nervous system.

There are several diseases that can cause medulla problems such as Parkinson's and Reinhold syndrome amongst others.

A medulla injury can result in a number of different health problems that may cause death if not treated properly.

There are several things you can do to prevent medulla damage or injury including wearing helmets while participating in high-risk sports or wearing seatbelts while driving.

Please talk to your healthcare provider if you think your medulla has been injured or should you have any further questions.