The cannabis plant has been used for centuries to treat a variety of ailments and it can be smoked, ingested, or applied topically.

There are two main types of cannabis plants, indica and sativa.

Indicas are typically shorter with wide leaves while sativas tend to be taller and have thinner leaves.

Cannabis plants that contain both indica and sativa elements will be labeled as a hybrid strain or even have a percentage of each on seed packages, for example, 70% indica and 30% sativa.

This article will explore the differences between indicas and sativas, what they're best for and how they're different from each other in terms of their effects on your body, terpenes, cannabinoids, and more.

What is cannabis and how is it used?

Cannabis is a plant that can be used for many different purposes.

You will find it commonly referred to as marijuana, but cannabis actually refers to the entire genus of plants, of which there are three species of cannabis or three subspecies depending on the classification.

The most popular and well-known species amongst these three is called Cannabis sativa, you may have heard someone refer to cannabis as "sativa" before. The other two species are Cannabis indica and Cannabis ruderalis.

Cannabis is used for its psychoactive properties, which come from a group of molecules called cannabinoids.

Cannabinoids interact with the body's endocannabinoid system, which is responsible for regulating things like mood, appetite, memory, and sleep. 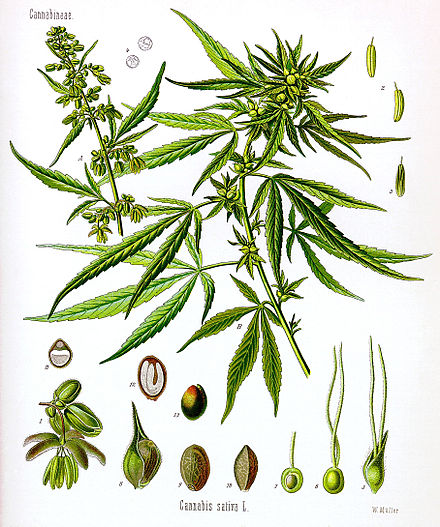 An average cannabis plant can contain anywhere from 15 to 30 percent THC, also called delta-nine tetrahydrocannabinol, the psychoactive compound that is responsible for producing a high in users when ingested or smoked.

The other two most prominent cannabinoids found in cannabis are CBD (cannabidiol) and CBN (cannabinol).

CBD is non-psychoactive and has been shown to have a variety of medical benefits, while CBN is only mildly psychoactive.

What are the effects of smoking or ingesting cannabis?

The effects of cannabis when smoked or ingested can vary depending on the person.

For some, cannabis can cause feelings of euphoria and relaxation. It can also increase appetite, which is called the "munchies", and make users feel sleepy.

Cannabis can also affect mood, memory, and coordination. It is used for a variety of different ailments from PTSD, chronic pain, to Crohn's disease.

If you overindulge in cannabis, you can have feelings of fear, paranoia, and anxiety.

That is why it is important when trying a new strain or you are a new user to take it "low and slow", meaning to only smoke or ingest a little bit to feel the effects first before taking any more.

What is the difference between a sativa and an indica cannabis plant?

The primary difference between a sativa and an indica cannabis plant is the way that they make you feel.

A sativa cannabis plant will generally make you feel energetic, euphoric, and creative.

An indica cannabis plant will generally make you feel relaxed, sleepy, and "couch-locked".

Although this is not always the case, as there are many hybrid strains of cannabis that combine the effects of both sativa and indica plants.

When it comes to physical characteristics, sativa plants are usually tall and thin, have narrow leaves with serrated edges.

They typically grow taller with long branches that stick out from the main stalk-like fingers on your hand. Indica plants tend to be shorter and bushier with wider leaves that are rounder and not as sharply serrated.

They tend to grow more like a Christmas tree, with a single stalk and many branches coming out from the sides.

What is a hybrid plant?

A hybrid plant is a cross between two different cannabis plants that have desirable traits from both parents.

Sativa and indica are the most commonly used parental strains for creating hybrids, but auto-flowering or early flowering hybrids with shorter growing times can be made using ruderalis strains.

What is a ruderalis cannabis plant?

A ruderalis cannabis plant is a type of cannabis that is low in THC and CBD content but is high in CBN.

It is the most auto-flowering of the three cannabis species and can flower even when it's young.

Cannabinoids are the molecules in cannabis that interact with the body's endocannabinoid system to produce psychoactive and therapeutic effects.

There are over 100 different cannabinoids found in cannabis, but THC, CBD, and CBN are the most prominent.

What are the different kinds of cannabinoids in cannabis?

As noted above, there are over 100 different kinds of cannabinoids in cannabis. We will examine some of the most popular ones below.

THC is the cannabinoid most known for its psychoactive effects. It can cause feelings of euphoria, relaxation, and altered perception.

CBD is a non-psychoactive compound that is thought to have many medical benefits like anti-inflammatory, anti-seizure, and anti-anxiety properties.

CBN is a psychoactive cannabinoid that is created when THC breaks down over time. It has been found to have anti-inflammatory and analgesic properties.

Terpenes are the molecules in cannabis that produce the plant's unique aromas.

They have been found to have therapeutic benefits as well, such as reducing anxiety and inflammation.

From around the web: indica vs sativa

Yes, different terpenes can have different effects depending on the strain of cannabis they are present in.

A list of the common terpenes and their effects are listed below.

Myrcene is one of the most common terpenes in cannabis and is said to smell earthy and musky.

It has been found to have analgesic, anti-inflammatory, and sedative properties and is thought to be great for pain relief.

Linalool has been found to have anti-convulsant, sedative, and antidepressant properties.

It is also known for its floral scent that smells like lavender or rosewood trees.

Pinene is a terpene common in many plants including pine needles and cannabis.

Pinene produces an invigorating aroma that is said to increase focus and energy. It has anti-inflammatory and bronchodilatory properties.

Terpineol is a sweet, floral terpene that is found in many plants including mints, tea tree oil, and cannabis.

Terpineol has been found to have antiseptic, analgesic, and anti-inflammatory properties.

This terpene has been found to be anti-inflammatory and to be an appetite suppressant.

It smells earthy with a hint of spice, like cloves or cumin.

Limonene is a citrusy terpene that is found in many plants including cannabis.

It has been found to have anti-inflammatory and antidepressant properties.

Caryophyllene smells spicy and is a terpene found in many plants including rosemary, hops, cloves, and cannabis. It has been found to have anti-inflammatory properties as well as being an effective treatment for anxiety.

There are numerous other terpenes in cannabis but these are some of the most prevalent in different strains. It should be noted that more research needs to be done on terpenes and that some of the effects listed may be anecdotal.

What strain of cannabis should I choose?

There is no one-size-fits-all answer to this question. It depends on what effects you are looking for, as well as your personal preferences.

There are also hybrids that produce effects of both indica and sativa plants (for example, Blue Dream is a cross between an indica strain called Blueberry and a sativa strain called Haze).

Hybrid strains can provide the best of both worlds when it comes to effects as they can provide a more balanced strain.

THC content does not have to be paramount, although if you are looking for milder effects you should consider low THC strains or even CBD strains with little THC.

After picking which cannabinoid you would like to be most prevalent between THC and CBD, many budtenders at marijuana dispensaries would urge you to pick a strain based on your needs and the effects of the terpenes.

For example, use a strain with humulene as the primary terpene if you don't want the munchies because it is thought to be an appetite suppressant.

If marijuana is legal in your state, you can always ask the employees at your dispensary for help.

It comes down to what will work best for you, whether it is an indica or sativa, how much THC content you are comfortable taking, and what effects you are looking for from the terpenes.

There are two different kinds of cannabis plants, indica and sativa.

There is a third kind called ruderalis but it does not produce significant levels of cannabinoids, at least in comparison to the other two, and is primarily used to shorten the flowering time of other strains. Indica strains tend to be shorter with wider leaves while sativa strains are taller with thinner leaves.

There are numerous terpenes in cannabis and each one has its own unique effect so you should choose a strain of marijuana that has a dominant terpene that suits your needs.

THC content does not have to be the main consideration when choosing a strain, although if you are looking for milder effects you should consider low THC strains or even CBD strains with little THC.

Most people will find what cannabis strain works for them through trial and error.