What is an HIV Rash? | Causes | Medication | Looks Like | Treatment | Medical Assistance

The human immunodeficiency virus, or HIV, is a viral infection that can also cause an HIV rash which is a skin condition that can develop in HIV-positive people.

The rash can be caused by medications for the virus.

HIV medication is used to treat and prevent HIV, and it will usually make you feel well; however, if you have an HIV rash, it could mean something else is wrong.

In this article, we will explore what an HIV rash looks like, why they happen, and how you should go about treating them.

What is an HIV rash?

An HIV rash is a skin rash that occurs due to HIV infection.

An HIV rash is common among HIV-infected individuals but it can also occur in those who are HIV negative if they have recently been exposed to HIV through sex or exposure of an open wound or cut on their body to HIV infected blood. HIV symptoms can be mild and an HIV rash is one of them.

From an HIV rash, it’s difficult to know whether you have HIV or not without seeing a doctor for a blood test to check for HIV antibodies.

An HIV rash is a red, itchy, and sometimes blistering skin condition that affects HIV-positive people.

HIV can be transmitted from infected person to uninfected person through contact with body fluids such as blood, semen, vaginal fluid during unprotected sex, or breast milk from an HIV-infected patient.

HIV rashes are often an indicator of the HIV infection being active in the body which increases your risk for other infections.

What causes an HIV rash?

The causes of an HIV rash are HIV medications, HIV infection, and HIV treatment. An HIV rash is caused by an overreaction of the immune system to HIV or its treatments.

Symptoms include red spots that may blister or ooze fluid. The lesions are typically flat-topped bumps, called papules, with a smooth surface. Lesions can also be raised and inflamed, also called papulosquamous, and form into large, fluid-filled blisters, which are called bullous.

An HIV rash is usually more painful than it looks, however, some people hardly notice their HIV rashes.

Itching can be the only symptom of an HIV rash, though other flu-like symptoms may occur.

If you have HIV, especially if you are taking HIV medications, it is important to watch for signs of an HIV rash and seek medical attention right away if one occurs.

Your doctor can diagnose HIV by examining your symptoms and performing blood tests.

Sometimes doctors may take a sample from the rash to determine if HIV is causing the HIV rash.

This can be done with a skin biopsy, which involves taking cells from your skin and examining them under a microscope for signs of HIV infection.

If you have an HIV-related dermatitis, then antihistamines or topical corticosteroids may help treat it.

Sometimes, these HIV rash treatments are not fully effective. HIV medications that cause HIV rashes may need to be changed or the dose lowered.

What medications can cause an HIV rash?

If you have HIV, it is typical for the doctor to prescribe an antiretroviral medication.

There are three classes of these drugs that are used to treat HIV and they have been know to create an allergic reaction which causes rashes. These include:

An HIV rash can be caused by certain antiviral medications including HIV medications which are known to have the adverse reaction of creating a rash.

HIV drugs known to cause HIV rashes include efavirenz, nevirapine, and abacavir sulfate when taken as an antiretroviral therapy. The rash typically occurs during the first few weeks or months of taking a medication.

An HIV rash appears as skin rashes that typically appear on the chest, hands, feet, and face although they have been known to appear everywhere on the body.

It usually begins with small red or purple spots of irritated skin and the HIV rash may spread to other parts of your body.

These papular rashes can be itchy and painful although that is not always the case. HIV rashes can be accompanied by fever, swollen lymph nodes, or mouth ulcers.

Other common symptoms include muscle aches, chills, sore throat, and night sweats, among others. An HIV rash is diagnosed with a blood test to determine if the HIV infection is active in your body and it also helps distinguish between an HIV rash and other skin conditions that are similar looking like eczema or psoriasis which are common skin conditions that may look alike but they are not caused by HIV.

HIV rashes can be confused with symptoms of other conditions like herpes simplex virus, streptococcal infection, or tinea corporis (ringworm). 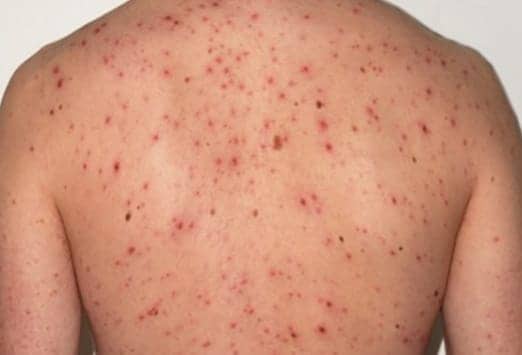 How do I treat an HIV rash?

If your HIV doctor diagnoses you with an HIV rash it is important to keep the affected areas clean and dry as possible which will help prevent the rash from spreading.

Also, do not take hot showers or hot baths as these have been shown to exacerbate the condition.

The typical treatment for HIV rash is topical creams and ointments that may help relieve the rash.

If your HIV rash becomes severe or does not respond to topical medications, then you will need to start taking HIV meds that don't cause an HIV skin reaction such as Prezista (darunavir) or Isentress (raltegravir).

If you suspect or know that a medication for HIV has caused an HIV rash, than talk with your healthcare provider about changing medications. HIV rashes usually disappear within a few weeks after HIV medications are changed.

If your HIV rash has not responded to medication changes or the rash is severe, it may be caused by another condition and you should see your doctor right away for further diagnosis.

Should I go to the doctor if I have an HIV rash?

Yes, with any HIV rash or HIV-related skin issue you need to see your doctor right away.

HIV rashes are common with HIV treatment but an HIV rash can be a sign of more serious health issues like liver disease, tuberculosis, herpes simplex virus infection of the skin, and others that may require immediate medical attention.

An HIV rash is a rash that is caused by either the virus itself or from medications taken for HIV.

It appears as a rash of bumps that usually are on the face, chest, hands, or feet although they can appear anywhere on the body.

There are three main classes of antiretroviral drugs and all three have been shown to have ingredients that can cause rashes.

To treat an HIV rash, you can use over-the-counter topical ointments and also consult with your doctor regarding your medications.

Certain medications can be replaced if they are found to be the reason for the rash. If you have an unexplained rash that you believe to be an HIV rash, it is important to see your doctor to determine the cause of it.

Should you have anymore questions, please consult your doctor for more medical advice concerning HIV rashes.

NIH.gov – Side Effects of HIV Medications