Castor oil is a vegetable oil made from castor beans. It has been used in many different parts of the world because it has been used as a folk remedy for centuries and there have been lots of anecdotal evidence about the benefits of castor oil. It can be taken internally or externally and today we will highlight five important medicinal uses for castor oil. It contains ricinoleic acid, which can help with digestive issues, as a moisturizer for skin conditions like eczema and psoriasis, and even as a way to reduce acne, also called acne vulgaris. Keep reading to learn more about this versatile product!

What is castor oil?

Castor seeds, from the plant Ricinus communis, are the source of castor oil and are completely natural. It has been used in the past for medicinal purposes, such as castor oil therapy which was popularized by Hippocrates around 400 BC. The castor bean is poisonous, however, castor oil does not contain any castor alkaloids due to the castor seeds being dried before extracting the oil. The poison is rendered useless because castor seeds are heated during the castor oil extraction process. Traditionally, the seeds were found in the tropics of East Africa and Ethiopia, India, and the Mediterranean Basin but have been dispersed to tropical and subtropical climates worldwide including in America. The castor oil plant is short-lived and does not survive in cold climates. To extract castor oil, castor seeds are first dried then milled into a meal before the process of extracting the oil begins. The milling is done by heating, expelling moisture via steam or hot air which releases Ricinoleic acid (the fatty acid responsible for castor oil's therapeutic benefits). This process is done for castor oil intended to be used for industrial purposes while castor oil intended for human consumption undergoes additional steps. The milling results in the castor meal, which can then go on to produce biodiesel and animal feed or it can be combined with an alkali (usually sodium hydroxide) to create castor oil. 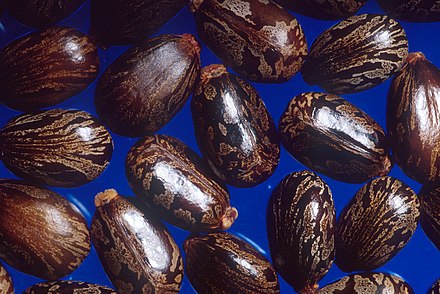 What has castor oil been used for in the past?

In its native habitat, the castor plant has been used for thousands of years as a laxative and purgative before the start of ancient Greek medicine. Castor seed extract began being imported by Europe around 300 BC when Alexander the Great conquered Egypt which had access to both castor oil and castor seeds. During the Middle Ages, castor seed was believed to be a cure-all medicine that could treat everything from coughs and colds to diarrhea and dysentery. This thick, viscous liquid has been used in the past to treat many ailments such as constipation and other digestive problems, ear infections, hemorrhoids, and respiratory conditions like bronchitis or whooping cough. Castor oil has not only been used as a medicine though as it has other uses including as a food preservative, a coating for industrial purposes, and was a precursor to many industrial lubricants. There are even companies finding a use for it as a biodiesel today. Historically, due to its strong, unappealing flavor, a dose of castor oil was even used as a punishment for children.

It should be noted that castor oil is NOT the same as castoreum. Castoreum is the yellow, castor-scented secretion of a castor sac which can be found in both male and female beavers. It was believed that castoreum, a chemical compound found in the castor sacs of beavers which are located under the castor oil glands, could be used to treat many different conditions. For example, Romans and Greeks believed that castoreum had aphrodisiac properties and would often drink castoreum mixed with wine as an "aphrodisiac elixir".

What methods are there to take castor oil?

There are several different ways castor oil can be taken. The traditional way is orally, usually by directly ingesting the castor oil either straight or mixed with some other liquid to help disguise its taste and viscous texture. This method has been known to cause diarrhea in many individuals due to castor oil's laxative properties. Another method of taking castor oil is through castor oil packs which are used to treat everything from asthma, bronchitis, and arthritis. Using castor oil in this form involves applying the castor seed extract directly onto the body surface where it can be easily absorbed into muscles or joints for therapeutic purposes. A castor oil pack usually consists of a piece of cotton cloth that has been soaked in castor oil. The pack is then placed on the body area of concern, covered with plastic sheeting and a hot water bottle before being left to rest for at least 30 minutes. These packs can be done daily or weekly depending on how often they are needed. Lastly, it has also been topically applied directly to the skin without castor packs.

What are five medicinal uses for castor oil?

There are many different uses for castor oil which is why it still remains a popular and important part of medicine today. Five of the most common uses for it today include:

The administration of castor oil has had in the past was a laxative though this effect could actually turn into poison as castor oil can cause an allergic reaction as well as upset stomach, abdominal cramps, and vomiting. In extreme cases you can even have a castor oil overdose, where the effects of castor oil leave you so dehydrated from diahrrea and vomiting that you die. Please be careful if using it in this manner and should you have an allergic reaction we recommend that you seek medical attention.

Is the use of castor oil scientifically proven?

Though castor oil has many medicinal uses, it is important to note that no scientific evidence exists today proving castor oil can cure or prevent any type of disease. Other than its laxative properties, castor oil's other effects are mostly anecdotal which means they have not been proven scientifically.

Castor oil is a vegetable oil that has been used throughout history for many purposes. It is derived from poisonous castor seeds that are heated up to render the poison harmless. Its uses have varied over time but it is still a popular, natural treatment today. In fact, people still use it for many purposes including as a laxative, to help with pain as an anti-inflammatory, and even as a way to help reduce acne among other uses. It should be noted, that besides its laxative properties it has not been scientifically proven to cure or help with any other medical condition. Anecdotal evidence does exist for its use in treatment in a number of different conditions although none of these have been proven. Should you have any further questions, please talk to your medical professional or pharmacist.